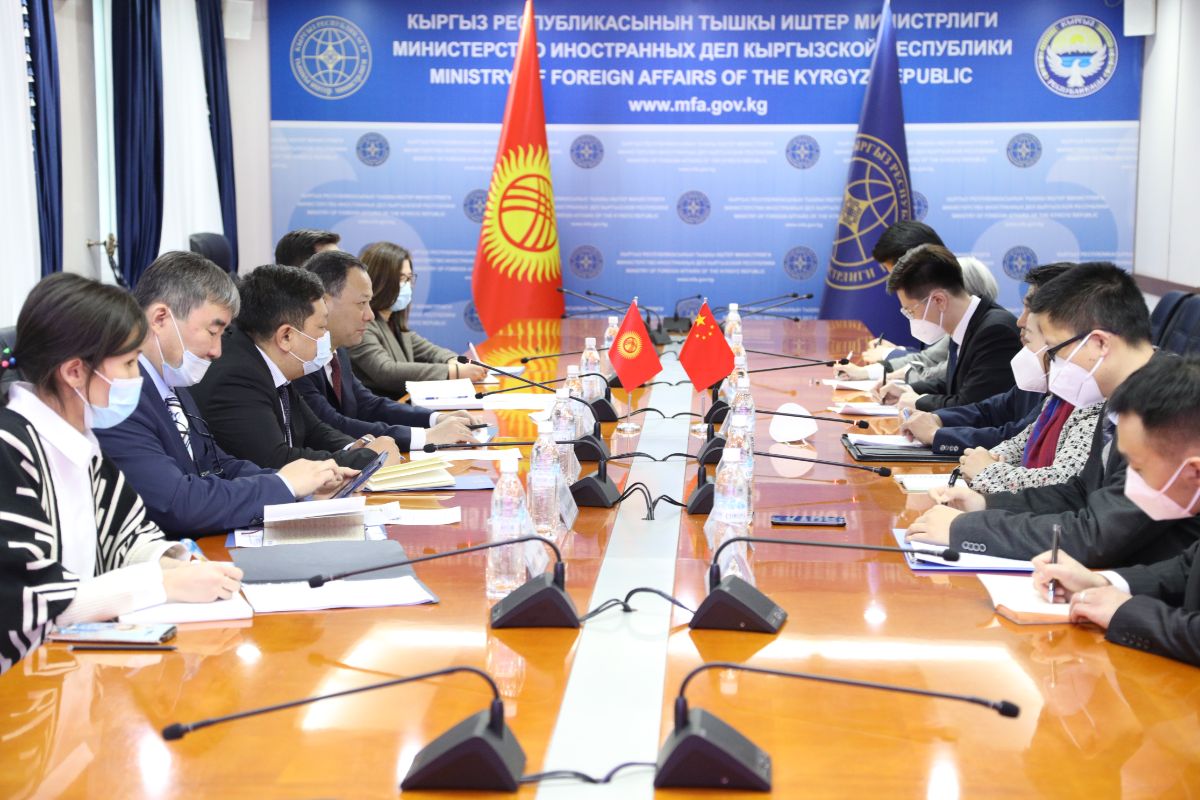 On December 27 the meeting of the Minister of Foreign Affairs of the Kyrgyz Republic Ruslan Kazakbaev with the Chinese delegation headed by the Special Representative of the Government of the People's Republic of China for Eurasia Mr. Li Hui took place.

During the meeting, the parties discussed relevant issues of bilateral political dialogue, exchanged views on further promoting comprehensive cooperation between the Kyrgyz Republic and the PRC, joint events to celebrate the 30th anniversary of diplomatic relations between the Kyrgyz Republic and the PRC, as well as interaction between the two countries within the framework of international organizations and platforms, in particular the UN, «CA + China».

Li Hui emphasized that over the past 30 years of bilateral interaction, Kyrgyz-Chinese relations have been developing dynamically and are at historically high level, which is a model of interstate relations of a new type. Traditionally friendly, good-neighborly relations and mutual trust between the two countries do not only contribute to the further strengthening of the comprehensive strategic partnership between Kyrgyzstan and China, which fully meets common interests and contributes to the joint development and prosperity of the two countries, but also benefit the strengthening of peace, stability and development in regional and global scales. The Chinese side respects the choice of the political, economic, social and cultural development path of Kyrgyzstan and firmly supports the efforts of the government of Kyrgyzstan aimed at protecting independence, sovereignty and territorial integrity, as well as developing and strengthening the national economy and maintaining stability in the country.

Li Hui informed that the Chinese side notes with appreciation that after assuming the office of the President of the Kyrgyz Republic by S.Zhaparov, the effective measures were taken to stabilize the internal political situation, a New Constitution was adopted in accordance with the will of the people following the referendum, and work is underway to restore the economy. The Chinese side is convinced that under the leadership of President S.Zhaparov, Kyrgyzstan will soon take the path of prosperity.

Minister R. Kazakbaev noted that strengthening the all-round strategic partnership is a priority direction of Kyrgyzstan's foreign policy. He emphasized the need to intensify the political dialogue between the Kyrgyz Republic and the PRC. In light of the 30th anniversary of the establishment of diplomatic relations between the countries, the parties exchanged views on joint events that are planned for 2022.

Taking into account that China is one of the main trade and investment partners of the Kyrgyz Republic, R. Kazakbaev called on the Chinese side to work together to implement investment projects in the territory of the Kyrgyz Republic. He expressed gratitude to the Government of the PRC for the provided technical and economic assistance to Kyrgyzstan. At the same time, he reiterated the need to increase the uninterrupted flow of goods at the Torugart and Irkeshtam checkpoints, and also expressed a request to assist in an accelerated departure of the containers with vehicles from South Korea produced in 2015, which are detained in the seaports of Qingdao and Lianyungang, China, until December 31 of this year. The Chinese side also announced that it had made a decision to organize the passage of these cargoes to the Kyrgyz Republic on a priority basis.

At the conclusion of the meeting, the parties agreed to actively work towards the practical implementation of issues of bilateral cooperation.