Main / Press-service / Attached news / The Minister of Foreign Affairs of the Kyrgyz Republic Ruslan Kazakbaev had a meeting with the Delegation of International Observers of the OSCE Parliamentary Assembly headed by Mr.Juel-Jensen 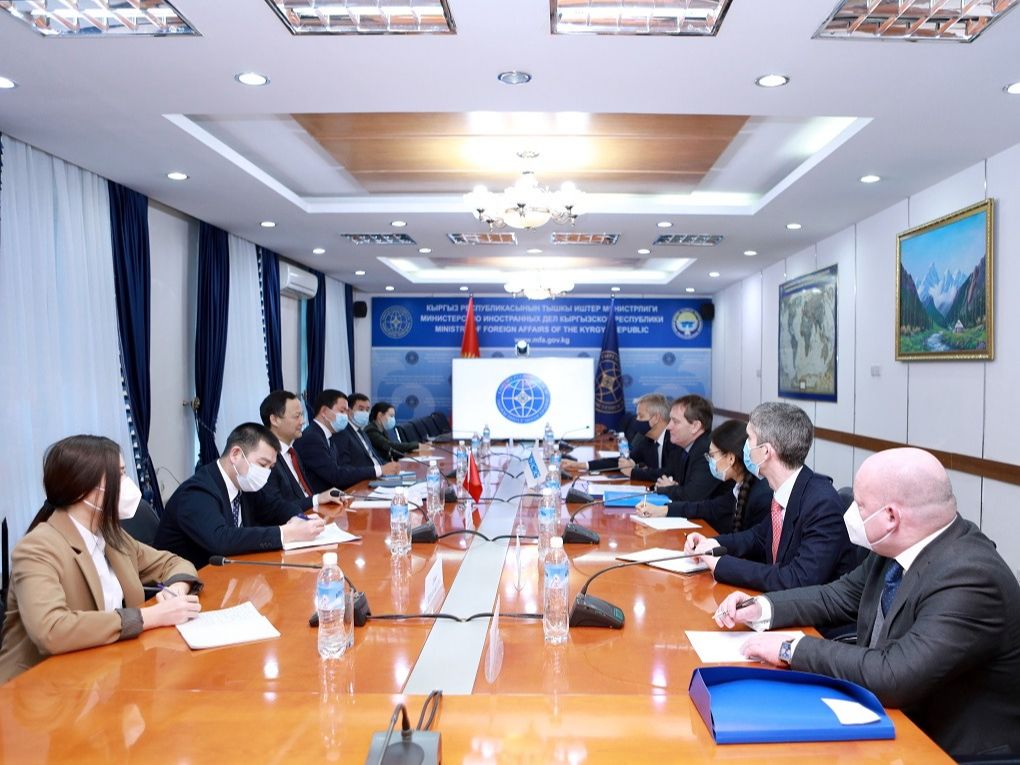 The Minister of Foreign Affairs of Kyrgyzstan informed the interlocutors that in order to ensure broad and open observation of the election process, 311 international observers from 43 countries and representatives of 96 media from 11 states have already started working in Kyrgyzstan.

Expressing gratitude to the OSCE PA for sending international observers to Kyrgyzstan, which are held during a difficult transit period in the country, R.Kazakbaev informed the OSCE PA delegation about the internal political situation in the republic, the presidential and parliamentary elections, the upcoming constitutional reform and the referendum on the new Constitution, as well as the special importance for the country, after the events of 5-6 October 2020, of holding fair elections in compliance with democratic principles.

In addition, the Minister congratulated Mr. Reinhold Lopatka on his appointment as Special Representative of the OSCE PA on Central Asia in December 2020 and noted the interest of the Jogorku Kenesh of the Kyrgyz Republic in actively participating in the work of the OSCE PA to strengthen parliamentarism in the region, as well as in close cooperation between all parliaments of the OSCE region.

During the meeting, R. Kazakbaev expressed gratitude for the OSCE support provided to the country in reforming the electoral legislation, facilitating the conduct of elections, helping state bodies in countering the COVID-19 pandemic, and noted the value of OSCE assistance for Kyrgyzstan in the current transit period.

In turn, the Head of the OSCE PA Mission, Mr. Peter Juel-Jensen thanked for the invitation of international observers to Kyrgyzstan in order to strengthen the young democracy and expressed confidence that the wise people of Kyrgyzstan will overcome all difficulties in a democratic way.

Peter Juel-Jensen noted that the delegation of the Jogorku Kenesh of the Kyrgyz Republic is very active in the OSCE PA and expressed hope for further fruitful inter-parliamentary cooperation.

At the request of the OSCE PA delegation, information had been provided on relations with the main foreign policy partners of the Kyrgyz Republic within the CIS, CSTO and SCO, as well as directions for conducting the monitoring process. Issues of upcoming reforms in various areas of state activity of the Kyrgyz Republic and support from the OSCE partner countries, especially from the EU and the United States were discussed.

The OSCE PA mission wished Kyrgyzstan a successful presidential elections on Sunday in a spirit of fairness and transparency, in accordance with the democratically elected course of the country.

Certificate: The OSCE Parliamentary Assembly is an inter-parliamentary organization that unites 57 states of Europe, Asia and North America that are members of the Organization for Security and Co-operation in Europe. The main task of the OSCE PA is to promote inter-parliamentary dialogue, which is an important component of the overall efforts to solve problems in the field of democracy in all participating States.