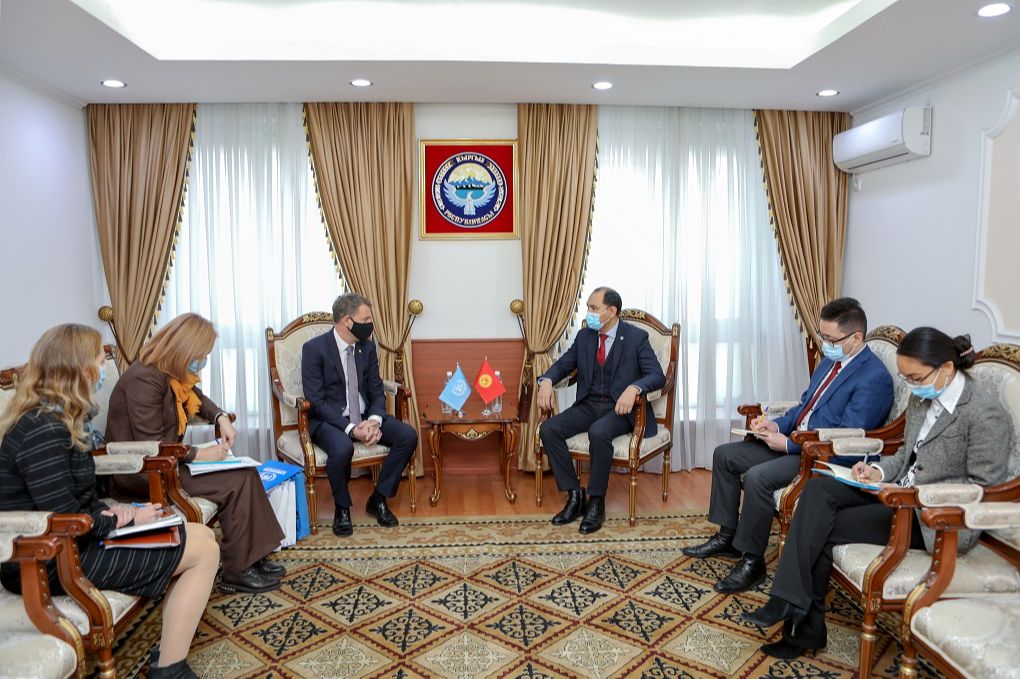 On February 16, 2021, in Bishkek, First Deputy Minister of Foreign Affairs of the Kyrgyz Republic Nuran Niyazaliev received the Regional Representative of the United Nations High Commissioner for Refugees (UNHCR) for Central Asia Mr. Hans Friedrich Schodder, on the occasion of his assignment.

Hans Schodder presented to the First Deputy Minister of Foreign Affairs of the Kyrgyz Republic N.Niyazaliev a letter of credentials of the UNHCR regarding his appointment as the new Regional Representative of the UNHCR for Central Asia residing in Almaty.

N.Niyazaliev congratulated Mr. Shodder on his appointment and expressed hope for the continuation of further fruitful cooperation between the Kyrgyz Republic and the UNHCR, stressing that the country consistently adheres to its international obligations under the 1951 Convention relating to the Status of Refugees and its 1967 Protocol. He noted that as a result of joint efforts of the Government of the Kyrgyz Republic and the UNHCR, Kyrgyzstan was recognized in 2019 as the first country in the world to eradicate all known cases of statelessness. In this regard, he assured that the Kyrgyz Republic will not stop there, and the work in this direction will be continued in active cooperation with the UNHCR.

During the meeting, the parties discussed current issues of cooperation and promising areas of interaction between Kyrgyzstan and the UNHCR in the field of protecting the rights of refugees, asylum seekers, and further preventing statelessness.

N.Niyazaliev expressed gratitude to the UNHCR for the constant support of efforts aimed at strengthening the national asylum system and facilitating the local integration of refugees, as well as for the technical assistance provided to 3 competent state agencies of the Kyrgyz Republic in 2020 in connection with the COVID-19 pandemic.

H.Schodder highly appreciated the current level of cooperation and expressed the readiness of the UNHCR to continue its assistance to the Kyrgyz Republic. He noted the achievements of the Kyrgyz Republic in the field of reducing statelessness, stressing that this is a positive example for the entire world community, and also called for acceding to the 1954 Convention on the Status of Stateless Persons and the 1961 Convention on the Reduction of Statelessness.

At the end of the meeting, the First Deputy Minister of Foreign Affairs of the Kyrgyz Republic N. Niyazaliev wished H. Shodder success in his new mission as Regional Representative of the UNHCR for Central Asia, and also assured of the readiness of the Government of the Kyrgyz Republic to provide further assistance and support to UNHCR projects and programs.