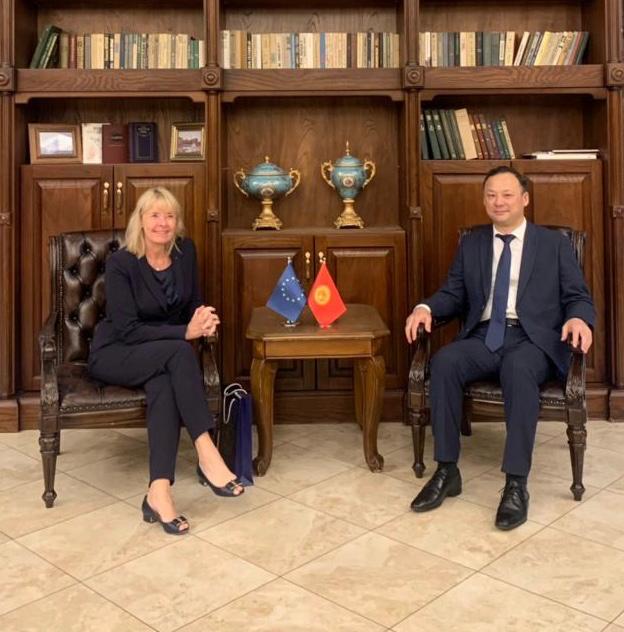 On September 10, 2021 Ruslan Kazakbaev, Minister of Foreign Affairs of the Kyrgyz Republic met with Terhi Hakala, European Union Special Representative for Central Asia during her two-day working visit to Bishkek.

The parties continued to discuss the schedule of upcoming bilateral and regional events at the highest and high levels, the priorities of budget support within the framework of the Multi-Year Indicative Program for 2021-2027.

They also discussed the organizational issues of the First EU-CA Economic Forum, which is scheduled for November 5, 2021 in Bishkek.

They exchanged views on the current situation around Afghanistan and noted a common interest in maintaining peace and preventing violence in the country.  The parties considered the approaches and further plans of the European Union in this direction, as well as the possibility of providing humanitarian assistance to the Afghan population, including ethnic Kyrgyz in the Big and Little Pamirs.

During the meeting, T. Hakala conveyed a message from the President of the European Council Charles Michel to the President of the Kyrgyz Republic Sadyr Japarov with congratulations on the occasion of the 30th anniversary of the country's independence and an invitation to visit Brussels at a convenient time.

At the end of the conversation, the parties agreed to maintain constant contact on all issues on the existing agenda.