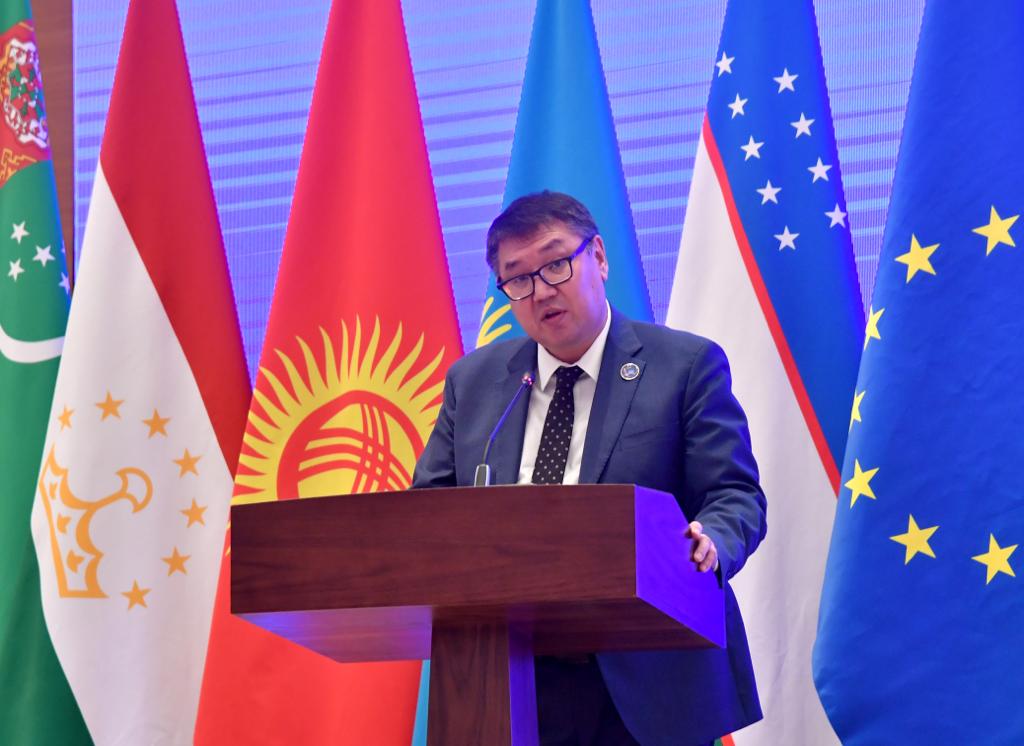 On November 18, 2022, the delegation of the Kyrgyz Republic, headed by Aibek Moldogaziev, Deputy Minister of Foreign Affairs takes part in the Conference on Connectivity between Central Asia and the European Union in Samarkand. It is also attended by Government delegations of the Central Asian states and the leadership of European political and financial institutions.

The work of the Conference is devoted to discussing the development of cooperation between Central Asia and the EU in order to promote sustainable connectivity in three main areas: digitalization, energy and transport.

Speaking at the plenary session, Aibek Moldogaziev noted that trade, economic, energy, transport and other types of interaction are a solid foundation for ensuring stability and security throughout Central Asia.

Touching upon the topics of energy cooperation, the Kyrgyz side provided information on the country's transition to the principles of "green economy", sustainability and carbon-free energy sources. In this regard, given the significant potential of the country in the development of renewable energy sources, including hydroelectric power plants, the Conference participants were invited to invest in this promising industry. This will bring Kyrgyzstan closer to becoming a regional center for the export of clean electricity and make a significant contribution to the environmental security of the region and the global confrontation with climate change.

Continuing the theme of investment cooperation and digitalization, the Kyrgyz delegation shared information about the investment climate in the country. It was noted that digitalization in Kyrgyzstan helps in the fight against corruption at all levels, which, coupled with economic reforms, has a beneficial effect on the growth of intellectual activity and the creation of a healthy business environment in Kyrgyzstan.

Deputy Minister Moldogaziev dwelled separately on the development of the transit potential of the Kyrgyz Republic and the region as a whole, and also called on the parties to implement effective infrastructure projects in the transport sector. It was emphasized that Kyrgyzstan, as a landlocked country, today actively continues the modernization of the country's important transport arteries and the construction of logistics centers.

Noting the importance of the humanitarian component in the topic of connectivity, the Kyrgyz delegation noted that it is the talented and educated youth of the region that will become its point of growth. In this regard, it was proposed to invest in the human potential of the region, to continue work on the opening of educational institutions involved in the development of new technologies and innovations, the exchange of advanced European technologies and expertise, and the strengthening of civil society.

The work of the Conference will continue in the course of three thematic panel sessions, where experts will discuss in detail the possibilities and ways to strengthen the connectivity between Central Asia and the European Union. The Kyrgyz delegation will make presentations at thematic sessions on digitalization and energy.