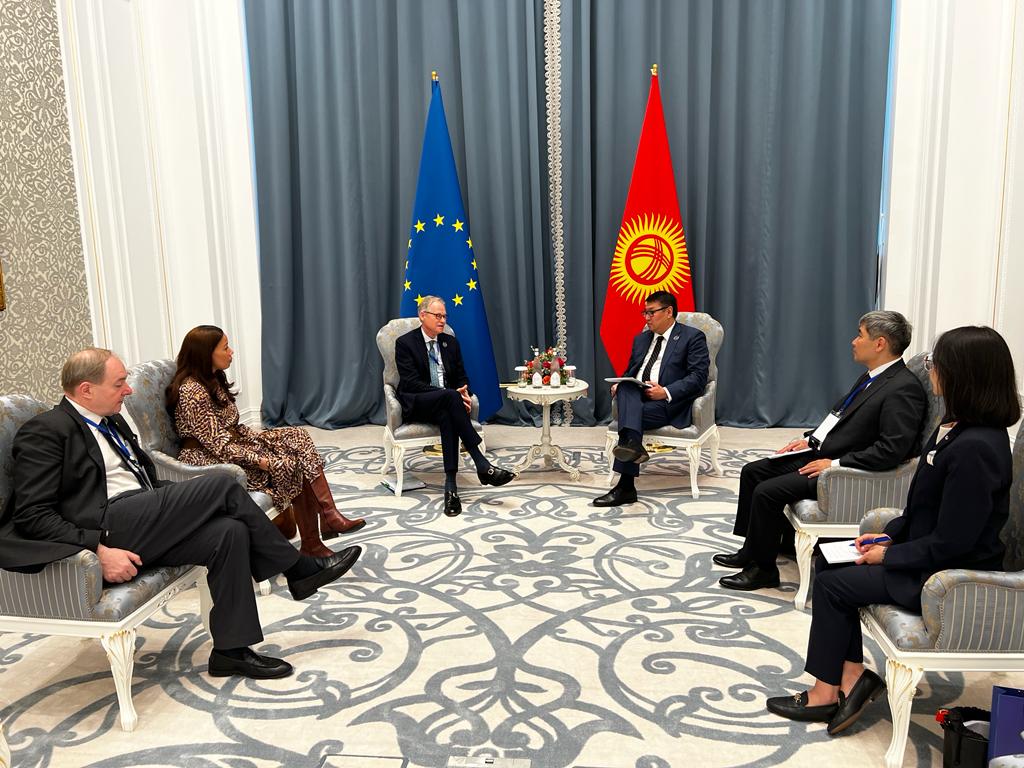 On November 18, 2022, Deputy Foreign Minister of the Kyrgyz Republic Aibek Moldogaziev held a series of bilateral meetings on the sidelines of the Connectivity Conference between Central Asia and the European Union in Samarkand.

Issues of interaction on bilateral, regional and international tracks with the European Union were discussed at a meeting with the Managing Director of the European External Action Service for Russia, the Eastern Partnership, Central Asia, Regional Cooperation and the OSCE Michael Siebert.

The parties discussed the implementation of the agreements reached during the recent meeting of the Minister of Foreign Affairs of the Kyrgyz Republic Zheenbek Kulubaev with the EU High Representative for Foreign Affairs and Security Policy Josep Borrell.

Project and program cooperation with the European Union was discussed separately at a meeting with the Director General for International Partnership of the European Commission, Peteris Ustubs. An agreement was reached to continue projects under the Multi-Year Indicative Program for 2021-2027, as well as to receive budgetary support in the amount of 3 million euros as part of a project in the field of digitalization.

During the meeting with the Vice-President of the European Investment Bank, Teresa Czerwinska, the possibilities of cooperation in the implementation of infrastructural "green" projects in the field of energy and transport were considered. In order to strengthen practical interaction, an agreement was reached on sending an expert group to Kyrgyzstan to unlock the potential of bilateral and regional cooperation for sustainable development.

A bilateral meeting with the Parliamentary State Secretary of the Federal Ministry for Economic Cooperation and Development of Germany, Niels Annen, was devoted to discussing ways to strengthen political dialogue and expand project and program cooperation between Kyrgyzstan and Germany.

At a meeting with OSCE Secretary General Helga Schmid, issues of bilateral and regional cooperation were discussed. The parties expressed satisfaction with the achieved level of cooperation, which is celebrating its 30th anniversary this year.

Aibek Moldogaziev expressed gratitude to the OSCE for supporting democratic processes, strengthening the stability and security of the country. He noted the relevance of the ongoing OSCE projects in priority areas for the country.

Deputy Minister expressed support for the activities of the OSCE Academy in Bishkek, the expansion of its educational and research potential.