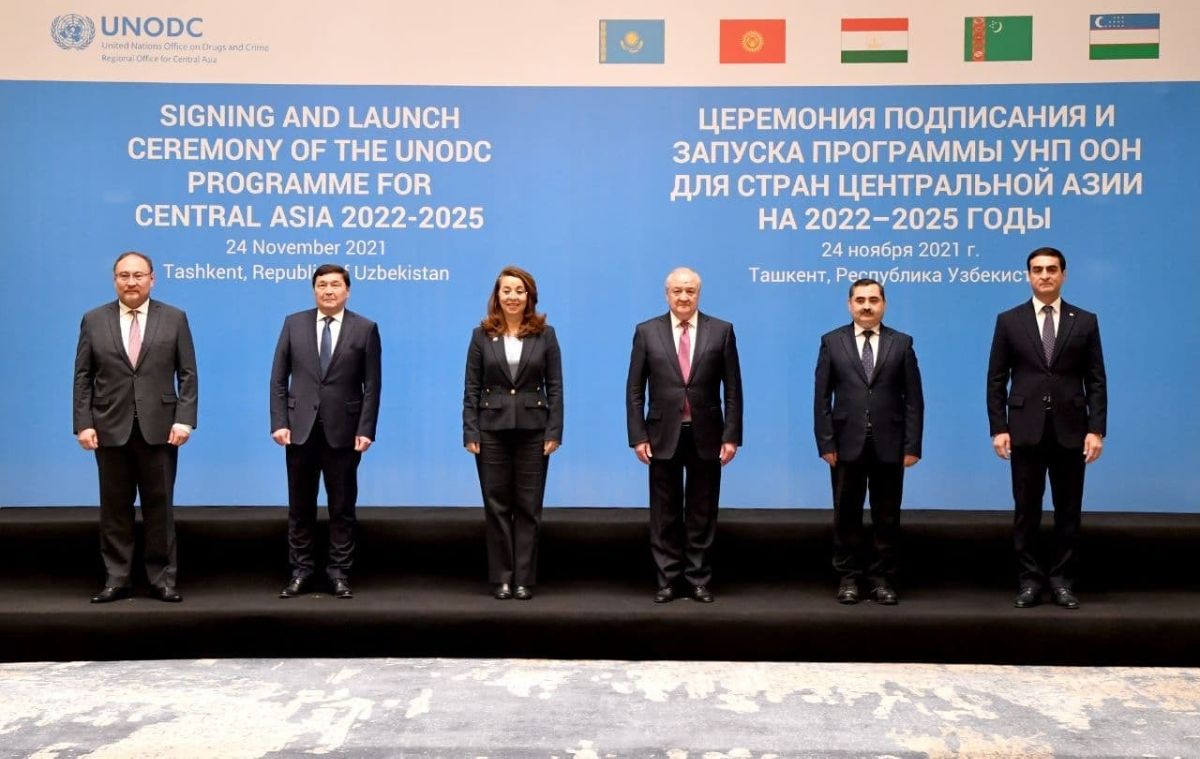 On November 24, 2021, in the city of Tashkent, Deputy Minister of Foreign Affairs of the Kyrgyz Republic Mr.Azizbek Madmarov took part in the signing ceremony of the United Nations Office on Drugs and Crime Program for the countries of Central Asia for 2022-2025 period.

The event was also attended by the Head of the UN Office in Vienna, UNODC Executive Director Ghada Waly, as well as the Minister of Foreign Affairs of Uzbekistan and deputy heads of the foreign ministries of Kazakhstan, Tajikistan, and Turkmenistan.

In her speech, UNODC Executive Director Ghada Waly said that the Program is being signed at a very important time, when the global COVID-19 pandemic has impeded movement in the world and the situation in Afghanistan is a serious challenge to international peace and security. The new Program aims to create a safe and secure Central Asian region free from the threats posed by organized crime and drug use, corruption, cybercrime and terrorism.

In his speech Azizbek Madmarov welcomed the adoption of the new Program and noted that the previous Program had demonstrated its effectiveness in practice. He also drew attention to the key role of the UNODC Global Strategy for 2021-2025 period, aimed at promoting global peace and security, as well as combating a new trend - cybercrime. He informed that the prevention of corruption is a priority and one of the main directions of the state policy of the Kyrgyz Republic. Welcomed the upcoming 9th Session of the Conference of the Parties to the UN Convention against Corruption to be held in Sharm El Sheikh, as well as the new UNODC GlobeNetwork initiative.

Azizbek Madmarov informed that within the framework of subprogram 1 "Combating transnational organized crime, drug trafficking and prevention of terrorism", since 2019, the UNODC project "Strengthening the capacity of mobile operational teams of the Service for Combating Illegal Drug Trafficking of the Ministry of Internal Affairs of the Kyrgyz Republic" is being implemented in Kyrgyzstan. He expressed the opinion that, taking into account the global goals of the Program aimed at solving security problems in the region, the next step in the implementation of this project, according to the Kyrgyz side, is the opening in Kyrgyzstan of the Regional Center for the Training of Operators and the Use of UAVs, whose activities will cover the whole of Central Asia. Expressed his conviction that the above UNODC project will contribute to a more effective fight against transnational organized crime, drug trafficking and terrorism, as well as to further strengthen interagency and cross-border cooperation not only in Central Asia, but throughout the Asian region.

At the same time, on the sidelines of the event, Azizbek Madmarov held a bilateral meeting with the Executive Director Ghana Waly to discuss the project activities of the UNODC in Kyrgyzstan. Taking into account the new challenges and threats, called for strengthening cybersecurity in a changing world and the development of COVID-19, as well as developing projects in the field of combating corruption.

In this context, Ghada Wall kindly requested to join the GlobеNetwork initiative and informed that UNODC intends to continue to support law enforcement agencies, the fight against drugs, strengthening borders, countering terrorism and money laundering.

In particular, the parties discussed the promising possibilities of using UAVs based on the results of practical events and trainings that demonstrated the enormous potential of using UAVs not only for the purpose of combating drugs, but also in countering terrorism, monitoring the use of biological resources, and conducting search operations.

In turn, Ghada Waly i positively assessed the initiative of the Kyrgyz side to create a Regional Center for the training of operators and the use of UAVs. Expressed the view on the need for joint resource mobilization for the creation of the above project.