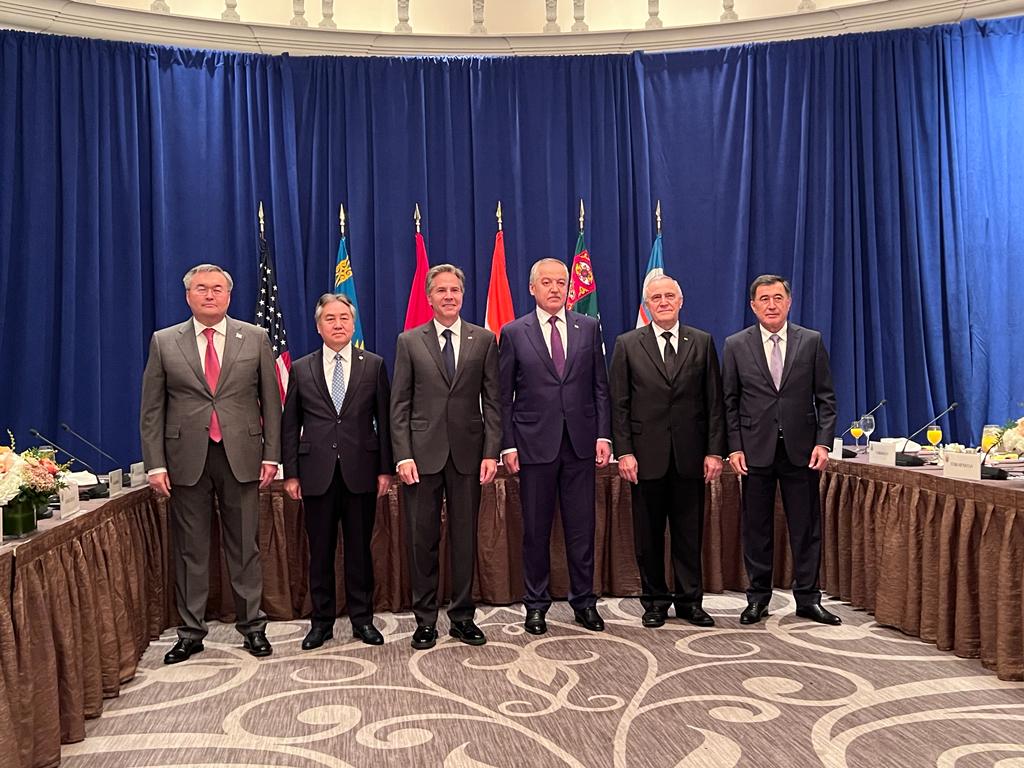 On September 22, 2022, in New York, the Minister of Foreign Affairs of the Kyrgyz Republic Zheenbek Kulubaev took part in the Ministerial Meeting of the “Central Asia + USA” (C5 + 1) cooperation format.

The meeting was also attended by the US Secretary of State A. Blinken, the Ministers of Foreign Affairs of Kazakhstan, Uzbekistan, Tajikistan and the Ambassador of Turkmenistan to the USA.

The main topic of the meeting was the strengthening of the sovereignty and territorial integrity of countries, food security, as well as cooperation in the field of economic interaction.

The participants highly appreciated the interaction within this format, noting the importance and interest in the comprehensive strengthening of the «C5 + 1» dialogue platform.

During his speech, the Minister of Foreign Affairs of the Kyrgyz Republic Zheenbek Kulubaev emphasized the need to strengthen regional cooperation with an emphasis on practical, trade and economic cooperation both between the Central Asian countries themselves and in their relations with the United States. Also noting the importance of implementing specific infrastructure and other projects that contribute to strengthening economic connectivity.

Touching upon the matters of the regional and global agenda, Minister
Zh. Kulubaev paid special attention to the issues of imposing sanctions, which could have a very sensitive effect on the level and quality of life of the population. In order to minimize the consequences of the sanctions policy, the head of the Foreign Ministry of the Kyrgyz Republic called for the establishment of a dialogue and consultations on the sanctions policy between the relevant state bodies. “We hope that such measures will help the world community to prevent further sliding of the world economy into a global crisis,” Zh. Kulubaev emphasized.

During the meeting, the American side initiated the allocation of 25 million US dollars for the implementation of projects aimed at improving the educational level of the population, as well as the export potential of the countries of Central Asia.

Following the meeting, the parties reached an agreement to continue active interaction within the framework of the established format of cooperation between the countries of Central Asia and the United States.