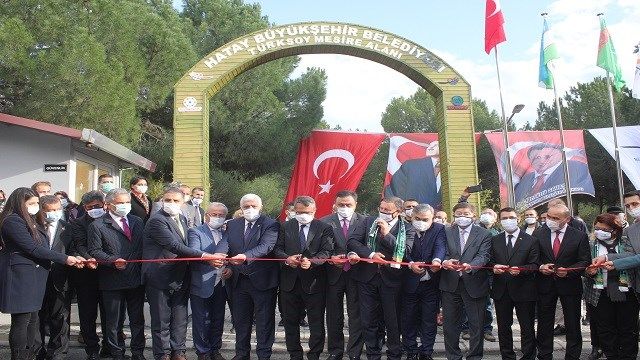 While speaking at the opening of the photo exhibition, Ambassador Kubanychbek Omuraliev noted that thirty years ago a new page opened in the centuries-old history of the Turkic peoples of the former USSR and the declaration of their independence contributed to further strengthening of relations between them.

On the same day, with the participation of the above-mentioned persons, the opening ceremony of the TURKSOY Park in Hatay was held, in which relief portraits of well-known representatives of the Turkic-speaking world with information plates, including of Chyngyz Aitmatov were installed.

During the event in honor of the opening of the park, Ambassador Kubanychbek Omuraliev made a speech, in which he noted that such events contribute to strengthening of friendship and cooperation between the countries. At the same time, he emphasized that the installation of a relief portrait of Chyngyz Aitmatov in the park is symbolic because he is the spiritual wealth of the entire Turkic world.

Within the framework of the events, Ambassador Kubanychbek Omuraliev also had a separate meeting with Governor of Hatay Province Rahmi Dogan and Mayor of the city Lutfu Savas. During the meeting, Ambassador Mr. Omuraliev noted the need to establish twinning relations between the city of Hatay and one of the cities of Kyrgyzstan, within the framework of regional development and bilateral trade and economic cooperation, and also discussed issues of Kyrgyzstan's participation in EXPO 2021 Hatay.