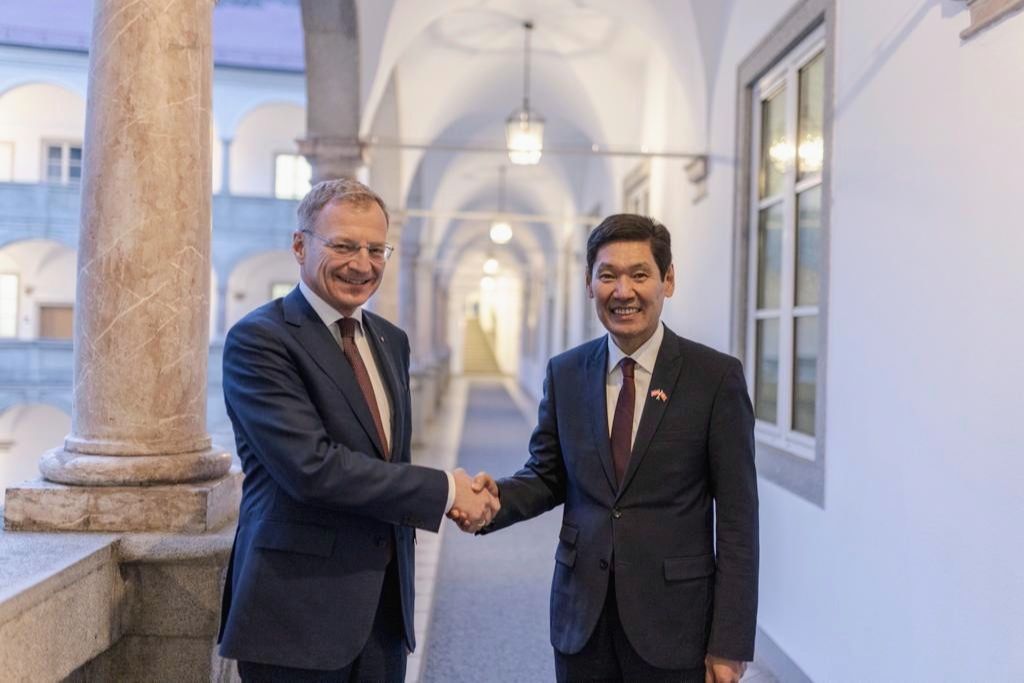 On November 15, 2021, Ambassador of the Kyrgyz Republic to Austria Tolendy Makeyev made a working trip to Linz, where he met with Tomas Stelzer – the Governor of the most important industrial region of the country, the Federal Land of Upper Austria.

The Ambassador of Kyrgyzstan informed the Governor about the main directions of Kyrgyz - Austrian relations, the results of the visits of the Minister of Foreign Affairs of the Kyrgyz Republic Ruslan Kazakbaev to Austria (September 30 – October 2, 2021) and the Federal Minister for European and International Affairs of Austria Michael Linhart to the Kyrgyz Republic 4 – November 5, 2021 to participate in the First EU – CA Economic Forum in Bishkek and conduct bilateral negotiations with the head of the Foreign Ministry of Kyrgyzstan.

As part of the visit of Minister Michael Linhart to the Kyrgyz Republic, a separate Business Forum in the B2B format with potential Kyrgyz business partners was organized for the accompanying official representatives of 16 Austrian companies, which resulted in the signing of memorandums of cooperation.

Due to the 30th anniversary of the establishment of diplomatic relations between Kyrgyzstan and Austria in 2022, the Ambassador noted that the parties are developing a joint Roadmap in all areas of cooperation, including the organization of mutual visits at the highest and high levels, holding scientific and practical conferences , round tables and other cultural events.

The Ambassador also indicated the interest of the Kyrgyz side in attracting advanced technologies of Austria in the field of health care, education, agriculture, hydropower, renewable energy, transport, digitalization and tourism. In this aspect, the expediency of further deepening the established cooperation with Austrian partners in the construction of medium and small hydropower plants in various regions of the Kyrgyz Republic was noted.

The Ambassador noted the prospects for the implementation of specific projects in Kyrgyzstan for the production, processing of ecologically clean agricultural products, vegetables and fruits for their further targeted delivery to the EU markets, taking into account the GSP + status of the Kyrgyz Republic.

In case of the upcoming November 28 this year in the Kyrgyz Republic of parliamentary elections, which play an important role in the context of further deepening democratic processes and ensuring sustainable socio-economic development of the country, the Ambassador drew attention to the importance of establishing partnerships between local governments in specific regions, which was approved by the governor.

Governor Thomas Stelzer, as head of the Land Government of Upper Austria, expressed his readiness to assist in the development of cooperation in specific areas of mutual interest.

For his part, the Governor recommended to actively use for this purpose the opportunities of the Honorary Consul of the Kyrgyz Republic in Upper Austria Walter Bremberger, who for many years successfully headed the Chamber of Commerce and Industry of this Federal Land and has extensive connections in political, trade and economic circles, in the field of education and culture.