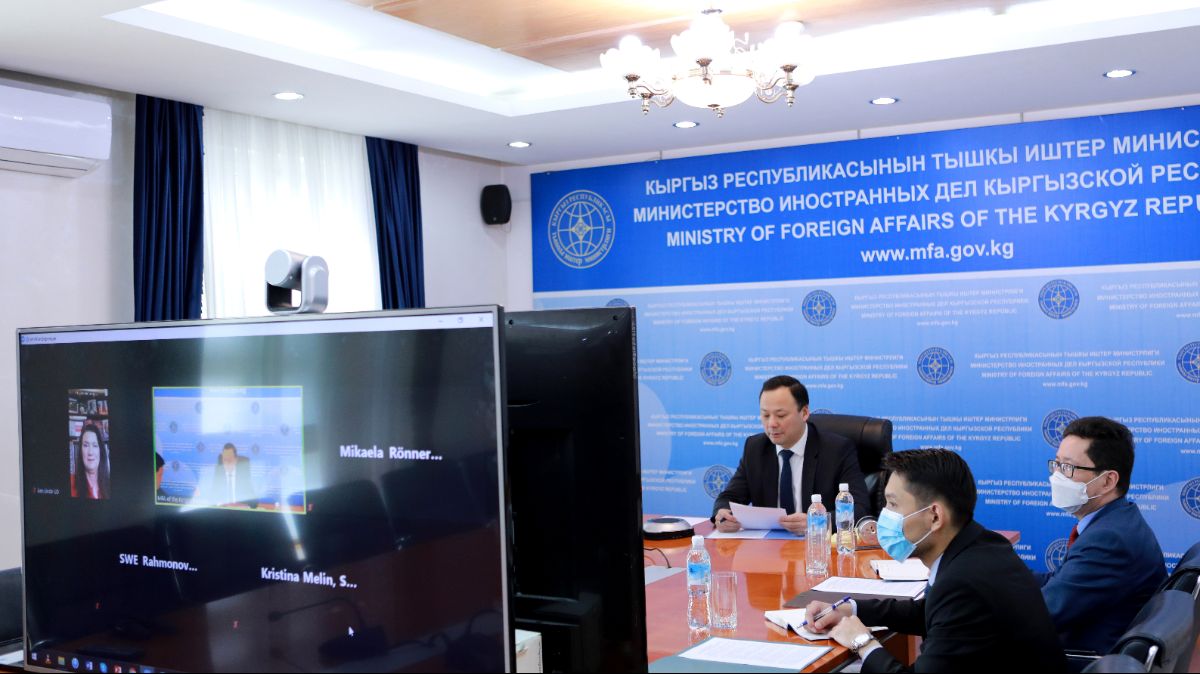 The Kyrgyz side informed H.E. Mrs. Ann Linde about the course of events that took place on April 28-30, 2021, and the current situation in the border regions of Kyrgyzstan.

Along with that, the Minister noted with regret that there were casualties on both sides, including among the civilians. In this connection, the Kyrgyz Republic declared May 1-2, 2021 as days of national mourning in memory of those who became victims of the armed conflict on the Kyrgyz-Tajik border.

Minister R.Kazakbayev, noting the inadmissibility of further escalation of the conflict and the importance of its solution only through a constructive peaceful dialogue between the parties, stressed the need to comply with the previously reached agreements on a ceasefire and withdrawal of troops. At the same time, he assured of the commitment of the Kyrgyz Republic to bilateral and international obligations and agreements.

As a result of the conflict, the number of internally displaced persons exceeded 27 thousand people. In view of this, Minister R.Kazakbaev noting the difficult humanitarian situation in the Batken oblast, expressed hope for the support of the OSCE to internally displaced persons. Additionally, he requested assistance in the reconstruction of destroyed infrastructure and social facilities in the post-conflict period, as well as houses of civilians.

Chairman-in-Office A.Linde thanked Kygryz party for its contribution to the peaceful settlement of the current situation and welcomed a common understanding of the inadmissibility of the conflict deepening. The OSCE gave a positive assessment to the establishment of a constructive dialogue between the leadership of Kyrgyzstan and Tajikistan and the signing of the Protocol on the settlement of the armed conflict in the border areas of the Batken oblast of the Kyrgyz Republic and the Sughd region of the Republic of Tajikistan. In this context, A.Linde urged the parties to strictly abide mutual commitments within the reached agreements.

A. Linde stressed the OSCE's commitment to the settlement of the conflict and readiness to provide assistance in the resolution of border disputes and post-conflict reconstruction of destroyed facilities. In addition, noting the importance of restoring trust between peoples in the border areas she announced the readiness of the Office of the OSCE High Commissioner on National Minorities to help in this matter.

In concluding the meeting, the parties agreed to maintain further dialogue on urgent issues of mutual concern.