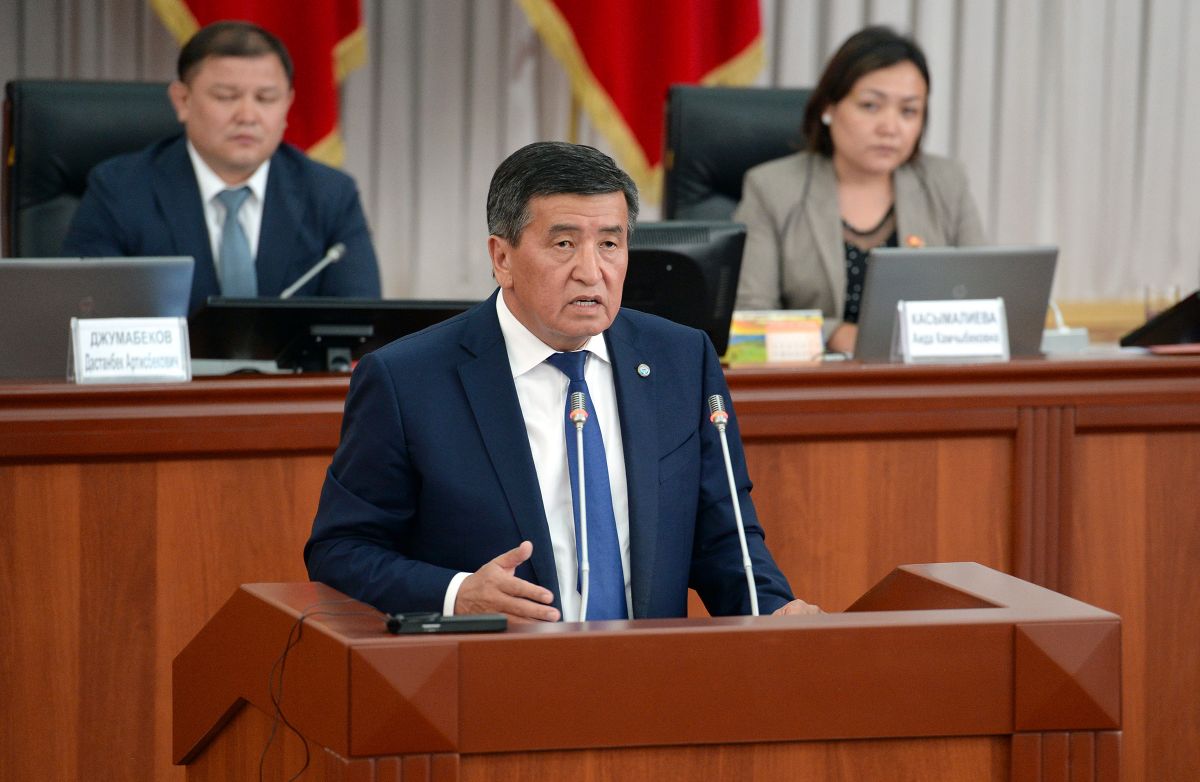 Yesterday, in continuation of this legitimate logic, on the basis of the requirements of the law, in pursuance of the investigator’s decision, there were attempts to bring Atambaev as a witness to investigative measures. The power structures acted strictly within the framework of the Constitution of the Kyrgyz Republic and adhered to the norms of the Code of Criminal Procedure. But Atambaev rudely violated the requirements of the Constitution and laws of the Kyrgyz Republic, and prevented the conduct of investigative measures under the law. Atambaev and his supporters put up armed resistance using firearms. They went far beyond the legal framework.

Unfortunately, several people were injured, one security officer died from the wound. The priceless life of this fighter stands above power, wealth, or any political ambitions. I express my condolences with a feeling of deep sorrow to the parents, children and relatives of the deceased. Recently, I met with his mother, Oktom Mamaeva, at the Forum of Compatriots. I am deeply saddened, share the bitterness of loss.

In order to prevent bloodshed, rubber bullets were used. I thought that it would be better if the authority of the authorities suffered, but you shouldn’t shed the blood of compatriots. A criminal case has been instituted on these facts. The guilty will certainly be punished. If until yesterday Atambaev was invited to the investigator as a witness, now he will be treated as a suspect in a serious crime.

Every effort will be made in order to maintain the rule of law, peace and security in the country. Prompt actions will be taken. Today I held an extraordinary meeting of the Security Council of the country. Decisions were made related to the situation in the village of Koy-Tash in the Alamudun district. We will not allow the separation of the people and the creation of an unstable situation! The state has the strength and means for this!

The Kyrgyz Republic is the state of law. The duty of the state is to ensure strict compliance with the requirements of the law by all citizens. Do not let yourself be deceived by the calls of liars, let us together confront the illegal actions of the provocateurs.

Separate forces present this process as a confrontation between Zheenbekov and Atambaev.

This is not a confrontation of two people. This is a frantic struggle against the disclosure of criminal acts, which are the peak of corruption in the country, against the investigation within the framework of the law and the provision of fair justice. This is a confrontation between the rule of law and self-will, the excess of personal interests over state interests!

Unfortunately, in the history of our country there have been several cases when prominent and authoritative domestic politicians were arrested. All of them, obeying the laws, came to the investigation and court hearings. And Atambaev, worried about his own well-being, refused to come to the prosecutor. For his sake, he sacrificed the lives of people.

Dear citizens, do not worry!

We must ensure peace in the country, the safety of society, the peaceful life of our citizens. We will also protect your business and protect your property. Trust the government, the laws! All political forces will unite and confront this dangerous provocation! I urge you to value peace and harmony in society above all, to be patient!

I am grateful to you for giving the opportunity to address the people through the tribune of the Jogorku Kenesh.

Ministers are present here at the session of the parliament

They will answer your questions.

There are urgent matters, I ask permission to go.