А – А А +
Обычная версия
Скрыть
News / News and Events / Joint article by the Chiefs of Missions of the CIS countries on the occasion of the 76th anniversary of the Victory in the Great Patriotic War (May 9, 2021) 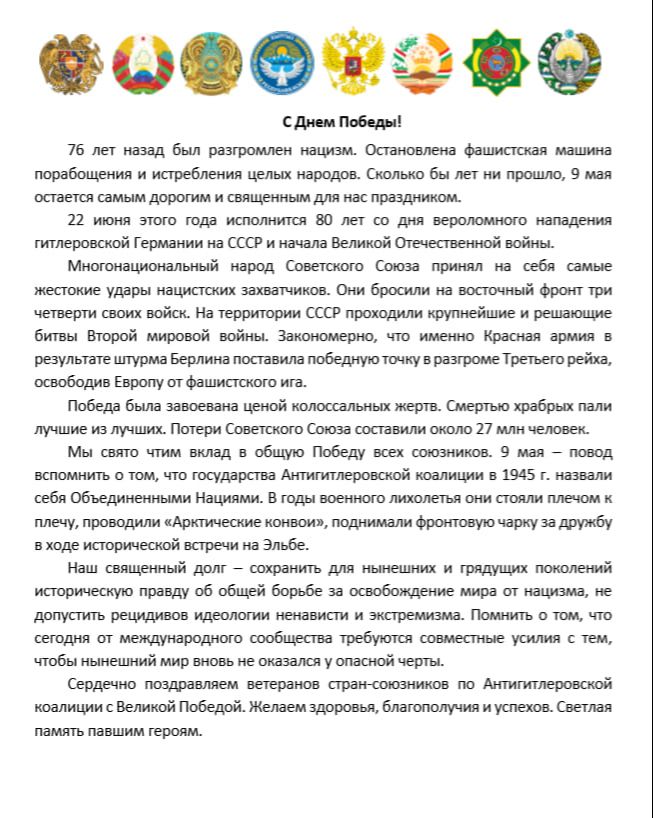 Seventy-six years ago Nazism was defeated. The fascist machine for the enslavement and extermination of entire peoples was stopped. No matter how many years it has been, May 9 remains the most cherished and sacred holiday for us.

June 22 this year will mark the 80th anniversary since the treacherous attack of Nazi Germany on the USSR and the start of the Great Patriotic War.

The multinational people of the Soviet Union took the most brutal blows of the Nazi invaders. The Hitlerites sent three quarters of their troops to the Eastern Front. The largest and decisive battles of World War II took place on the territory of the USSR. It was natural that the Red Army was the one to capture Berlin and victoriously complete the defeat of the Third Reich, liberating Europe from the fascist yoke.

The victory was won at the cost of immense sacrifice. Bravely died the best of the best. The losses of the Soviet Union were about 27 million people.

We hold sacred the contribution of all Allies to the common Victory. May 9 is an occasion to recall that the states of the Anti-Hitler Coalition became the United Nations in 1945. During the hard war years, they stood shoulder to shoulder, conducted Arctic convoys and raised frontline toasts to friendship at a historic meeting on the Elbe River.

Our solemn duty is to preserve the historical truth about the common struggle to free the world from Nazism for present and future generations, to deter a relapse of the ideology of hatred and extremism. And to remember that today joint efforts are required from the international community to keep the modern world from approaching the danger line again.

We extend our heartfelt Great Victory Day greetings to veterans of the Allied countries of the Anti-Hitler Coalition. We wish them health, well-being and success. Blessed memory to the fallen heroes.