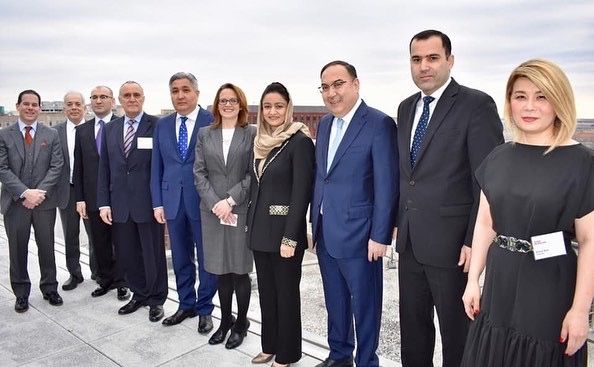 On March 29, 2019, at the office of the law firm Baker & McKenzie in Washington, DC a panel discussion on doing business in Central Asia was held. Ambassador of Kyrgyzstan Bolot Otunbaev together with the heads of diplomatic missions of Kazakhstan, Tajikistan, Turkmenistan, Uzbekistan and Afghanistan took part as a panelist at the event. Representatives of the National Security Council, Department of State, Department of Commerce, USAID, Office of Trade Representative, the largest US companies in various sectors of the economy, international organizations, expert communities and educational institutions of the United States participated the event. Deputy Assistant to the President of the United States, Senior Director for South and Central Asian Affairs of the US National Security Council Ms. Lisa Curtis spoke at the event as the special guest.

Ambassador Otunbaev during his speech spoke in detail about the investment, economic, export and tourism opportunities of Kyrgyzstan. In addition, he informed the participants of the event about the efforts undertaken by the country's leadership to ensure safe business in the country, safe stay of foreign investors in Kyrgyzstan, as well as ongoing reforms in the country to eliminate political and corruption risks for entrepreneurs, including foreign ones. A separate topic of discussion was the development of the economic potential of the Central Asian region and the development of cooperation between Central Asia and US companies in the trade and economic, tourism, educational and cultural spheres.

At the end of the meeting, representatives of US companies expressed their interest in organization of their visit to Kyrgyzstan in order to create and implement joint projects, as well as establish cooperation with representatives of government agencies and the private sector of our country.