А – А А +
Обычная версия
Скрыть
News / News and Events / The hall "Kazakhstan in the years of the Second World War, the culture of the diasporas" in the Central State Medical University of the Republic of Kazakhstan was supplemented with materials. 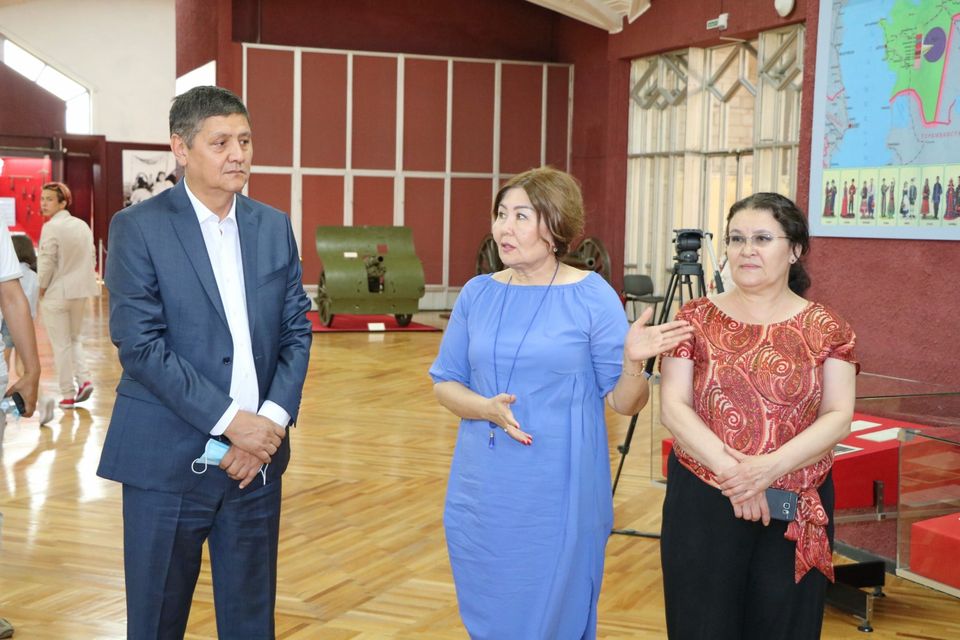 The Central State Museum of the Republic of Kazakhstan has done a lot to renovate the 3rd exposition hall of the museum "Kazakhstan during the Second World War, the culture of the diasporas", which was supplemented with new items of museum value that have historical and ethnographic value, demonstrating the rich culture and life of the peoples of Kazakhstan. Materials donated to the Central Museum from the representations of ethno-cultural associations and preserved in limited quantities are of scientific and educational interest for a wide range of the public.

On June 3, 2021, at the Central Museum of the Republic of Kazakhstan, a meeting was held with the Consul General of the Consulate General of the Kyrgyz Republic in Almaty Aripov Nazarali Turdalievich and representatives of the public association “Kyrgyz Ethnocultural Association“ Muras ”in Almaty (Mamyrov R.K., Tatybekov M. N.) on the occasion of the presentation of a new exposition complex dedicated to the Kyrgyz diaspora. Items characterizing the culture, life and traditions of the Kyrgyz people, donated to the museum's funds by the ethnocultural association "Muras" and representatives of the Kyrgyz diaspora, have replenished the stationary exposition.

The Deputy Director of the Central State Library of the Republic of Kazakhstan Bibigul Dandygaraeva and the Consul General of the Consulate General of the Kyrgyz Republic in Almaty Aripov Nazarali Turdalievich made a welcoming speech, who spoke about plans for the future in the implementation of joint international cultural projects. During the event, the guests got acquainted with the exposition complex “Culture of Diasporas of Kazakhstan”. All participants of the event were presented with letters of thanks from the Central Museum of the Republic of Kazakhstan, from the NGO “Kyrgyz Ethnocultural Association“ Muras ”and the Assembly of the People of Kazakhstan. General Consul N. Aripov left his wishes to the museum in the Book of Honorary Guests.