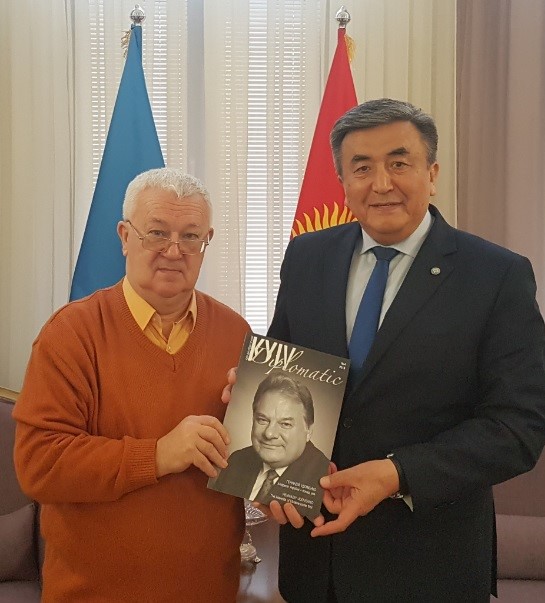 On January 30, 2019, the Ambassador Extraordinary and Plenipotentiary of the Kyrgyz Republic in Ukraine Zh. Sharipov met with the chief editor of the “Kiev Diplomatic” magazine, a member of the national union of journalists of Ukraine O. Kondratenko.

The magazine publishes various articles on culture, life, tourism and investment opportunities of foreign countries, interviews of the heads of diplomatic missions accredited in Ukraine. The journal annually releases 6 issues with a circulation of 5,000 copies.

Oleksandr Kondratenko presented the No. 4 issue of the 2018 journal in which there was material on the holding by the Embassy of a diplomatic reception on the occasion of the celebration of the 27th anniversary of the Independence Day of the Kyrgyz Republic and the 90th anniversary of Ch. Aitmatov.

During the meeting, the Sides discussed issues of cooperation in 2019 and noted the importance of strengthening cooperation in all areas of mutual interest.