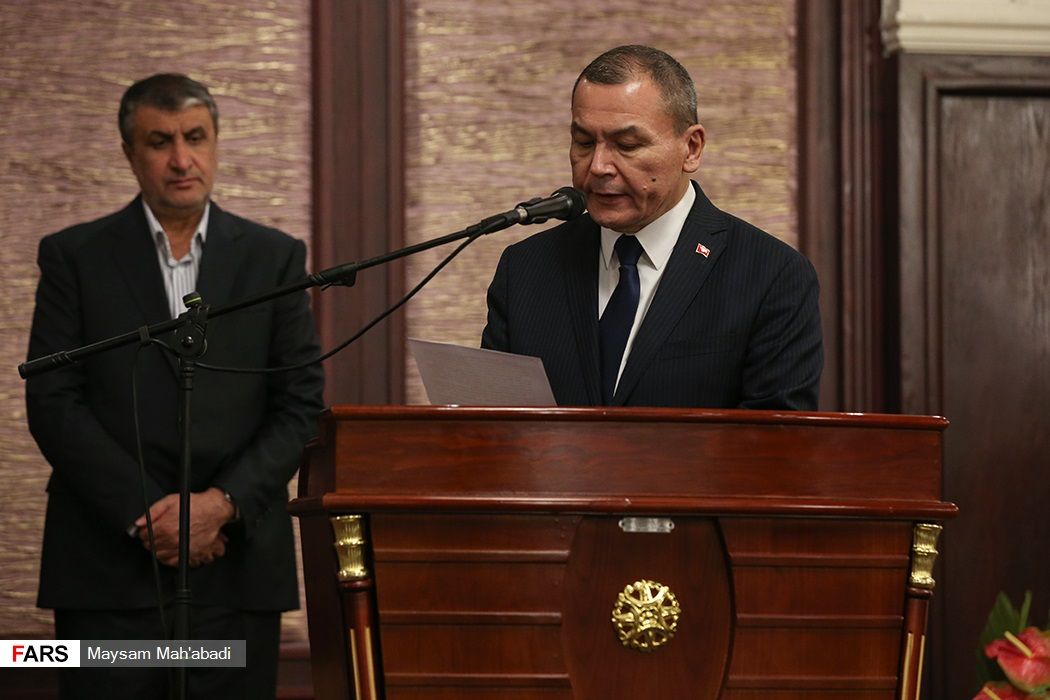 On October 17, 2019, in Tehran, an official reception was held on the occasion of the 28th anniversary of the Independence Day of the Kyrgyz Republic, organized by the Embassy of the Kyrgyz Republic in the Islamic Republic of Iran.
The event was attended by the Minister of Roads and Urban Planning of the Islamic Republic of Iran, co-chair of the Kyrgyz-Iranian Intergovernmental Commission for Trade, Economic, Scientific, Technical and Cultural Cooperation (IGC) Mohammad  Eslami,  Member  of the Majlis (Parliament) of the Islamic Republic of  Iran  Najafi  Khoshrudi, General Director of the CIS Department of the Ministry of Foreign Affairs of the Islamic Republic of Iran Mohammad Bagheri, representatives of other ministries and departments of the Islamic Republic of Iran, heads and diplomats of diplomatic missions of foreign states, UN representatives, accredited to  Iran, representatives of  iranian business structures, the media, as well as students and citizens of the Kyrgyz Republic living in Iran.
At the beginning of the reception, the national anthems of Kyrgyzstan and Iran were performed. Then, the Ambassador Extraordinary and Plenipotentiary of the Kyrgyz Republic to the Islamic Republic of Iran Avazbek Abdurazakov and the Minister of Roads and Urban Planning of the Islamic Republic of Iran Mohammad Eslami delivered a welcoming speech to the participants in the celebration.
In his solemn speech, Ambassador A. Abdurazakov congratulated all the participants of the event on the Kyrgyz national holiday and informed those present about the achievements of the Kyrgyz Republic during the years of independence, about the main areas of cooperation between Kyrgyzstan and Iran. In particular, he noted that Iran was one of the first states in the world to recognize the independence of the Kyrgyz Republic and establish diplomatic relations with Kyrgyzstan.
The peoples of Kyrgyzstan and Iran are united by a historical and cultural community, which is a solid foundation for bilateral cooperation. At present, relations between our countries serve as a worthy example of successful cooperation between two fraternal peoples. They are based on a high level of trust in each other, the coincidence of conceptual approaches to a wide range of international problems and the desire for joint cooperation. In recent years, thanks to high-level visits, relations between the Kyrgyz Republic and Iran in political, trade, economic and cultural areas have further strengthened and intensified, a long-term cooperation program between the Kyrgyz Republic and Iran has been adopted, the implementation of which, at present, the parties are working on.
Kyrgyz Ambassador expressed gratitude to the Iranian side for the grant assistance provided for the construction of social facilities in Kyrgyzstan.
In turn, Minister M. Eslami noted that Kyrgyzstan and Iran, being culturally similar states, have built a solid partnership foundation based on mutual respect, openness, trust and mutual interests, and also expressed hope that the IGC will make a significant contribution to development mutually beneficial cooperation between the two countries.
As part of the event, a mini-exhibition was organized with Kyrgyz national ornaments, paintings, souvenirs. The guests were also presented with films about Kyrgyzstan, a musical and cultural program, during which Embassy staff performed Kyrgyz national music (kүү) on a komuz, children of Kyrgyz diplomats performed the Kyrgyz national dance “Kara Jorgo”, which caused a storm of applause from the audience, giving the event a special and distinctive atmosphere and color.
At the end of the event, specially prepared films on CDs about nature and culture, tourism and investment potential of Kyrgyzstan, CDs on investment projects and Free Economic Zones of the Kyrgyz Republic, as well as national souvenirs were distributed to all participants.
Before this event, Ambassador A. Abdurazakov gave the “Fars News” news agency and other local media interviews on the prospects for further development of bilateral cooperation between Kyrgyzstan and Iran.