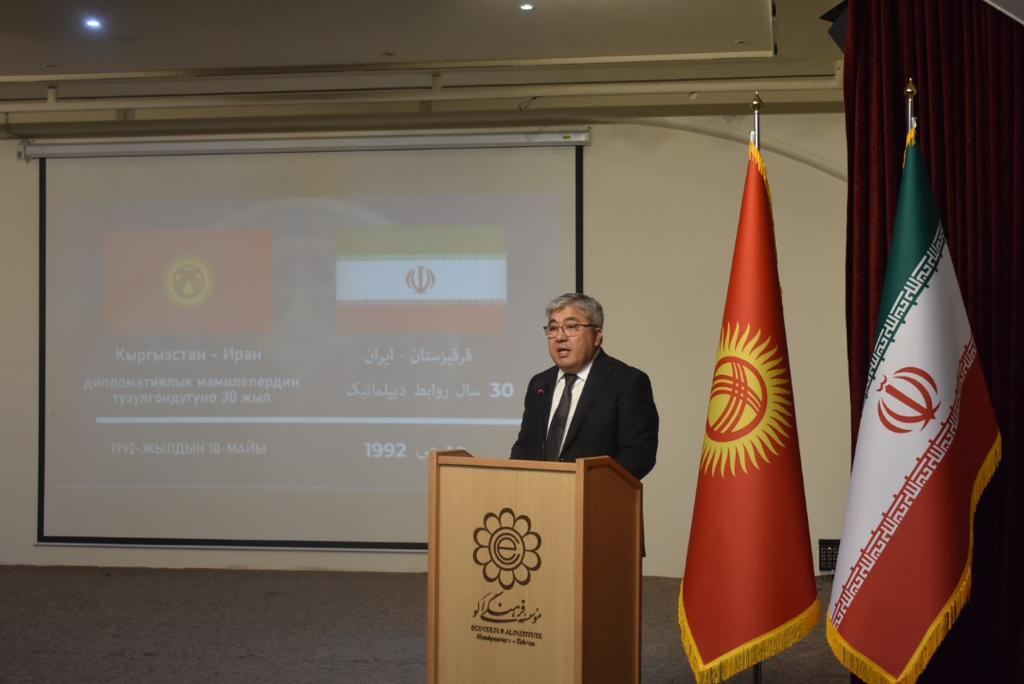 On May 15, 2022 the Embassy of the Kyrgyz Republic in the Islamic Republic of Iran held an official event dedicated to the 30th anniversary of establishment of diplomatic relations between the Kyrgyz Republic and the Islamic Republic of Iran. The event was held at the Cultural Institute of the Economic Cooperation Organization (ECO/ECO) with the participation of representatives of the Government, Parliament, Foreign Ministry of the IRI, line ministries and departments of the IRI, as well as the diplomatic corps and international organizations accredited in the IRI.

In the official part of the event the welcoming and congratulatory speeches were made by the Ambassador of Kyrgyzstan to Iran Mr. T.Sydykov, Deputy Minister of Foreign Affairs - President of the Institute of International Political Studies of IRI M.H. Sheikholeslami and General Secretary of the Economic Cooperation Organization (ECO/ECO) Mr. Kh. Noziri.

During the event the Embassy organized an exhibition of paintings by Kyrgyz artists, exhibited books and works of Chingiz Aitmatov, a popular writer of the Kyrgyz Republic, translated and published in Persian, presented products of Kyrgyz applied arts and crafts, Kyrgyz national clothing, as well as traditional Kyrgyz national dishes and sweets. The event was highlighted by a children's dance group dressed in traditional Kyrgyz costumes, giving the event a special national atmosphere and flavour.

Also, documentary films about the history and culture of the Kyrgyz people, Kyrgyz folk traditions, as well as investment and tourism opportunities in Kyrgyzstan were shown for the guests of the official event by the Embassy of the Kyrgyz Republic in the IRI.

Also to celebrate the 30th anniversary of diplomatic relations between Kyrgyzstan and Iran Embassy in Iran announced the "Week of Kyrgyz cinema in Tehran" in the movie hall of the Institute of Culture of the ECO in the period from May 16 to May 19, 2022 will show the feature films "Erte kelgen turnalar", "Kurmanjan Datka", "Atanin kerezi", "Noshir" and "Akyrky koch".