А – А А +
Обычная версия
Скрыть
News / News and Events / For the first time in the history of Kyrgyz-Indian relations, a permanent platform has been created between women entrepreneurs of Kyrgyzstan and India 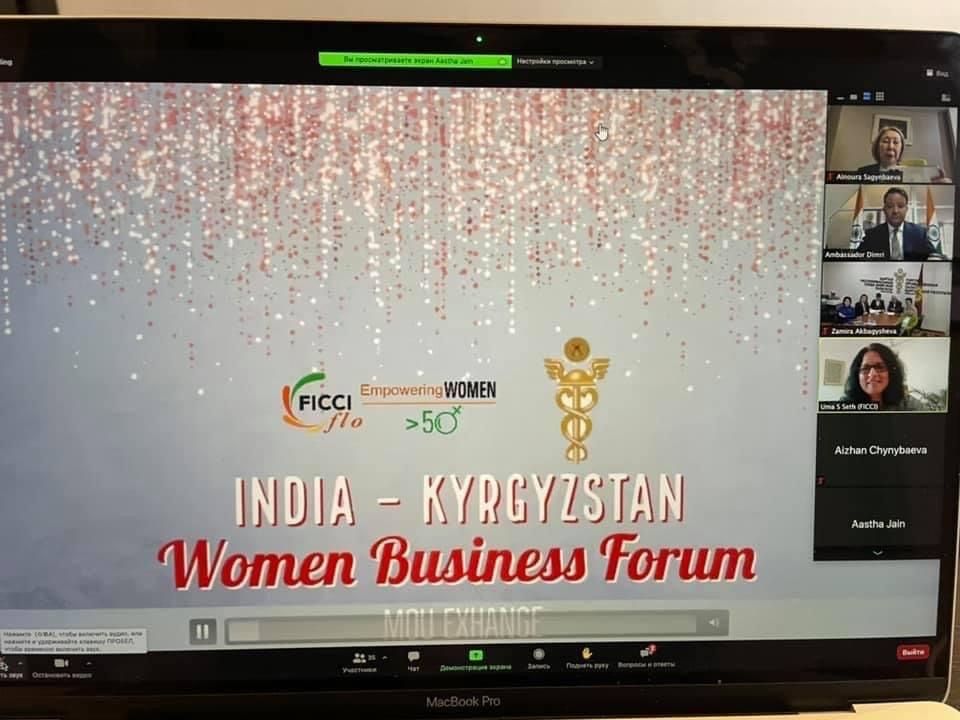 On April 20, 2021, the official opening of the International Business Forum of Women of Kyrgyzstan and India in a virtual format took place.

The organization of this forum became the implementation of the initiative of the Embassy of the Kyrgyz Republic in India and the Federation of Indian Chambers of Commerce and Industry (FICCI).

The business forum from the Indian side was opened by:

- Mr.Alok Dimri – Ambassador of India in the Kyrgyz Republic.

On behalf of the Kyrgyz side, the Forum was launched by:

- Ms.Zamira Akbagysheva - President of the Congress of Women of the Kyrgyz Republic;

- Mr.Asein Isaev - Ambassador of the Kyrgyz Republic in India.

Harjinder Kaur Talwar, Past President FICCI FLO, Zamira Akbagysheva, President of the Congress of Women of the Kyrgyz Republic and Ainoura Sagynbaeva, Chairperson of the “Women's Forum“ Kurak ” were appointed as co-chairs of the Forum.

Two Memorandums of Understanding were signed at the Forum between:

- Federation of Indian Chambers of Commerce and Industry (FICCI) and the Congress of Women of Kyrgyzstan;

- Federation of Indian Chambers of Commerce and Industry (FICCI) and “Women's Forum“ Kurak ”.

Sangita Reddy noted in her speech that initiatives to support and promote women's entrepreneurship are developing both in India and in Kyrgyzstan, in this regard, it is important to find common directions where the Indian side could support the initiatives of Kyrgyz women's organizations.

The Kyrgyz side represented by the Vice-Mayor of Bishkek Chynybaeva, as well as Akbagysheva and Sagynbayeva noted the uniqueness of the creation of such a permanent women's forum, which will become a platform for expanding business interaction and creating networks in Kyrgyzstan and India in such areas, as handicraft and applied arts, agriculture, tourism, IT, pharmaceuticals and many others.

Ambassador Isaev emphasized in his speech that the unification of the traditionally strong women's movements of Kyrgyzstan and India in a large joint forum will make a significant contribution to bilateral relations between the Kyrgyz Republic and India.

The specific projects of women entrepreneurs from Osh and Naryn were also of great interest to India, and detailed plans for their implementation were presented.

At the end of the Forum, the Indian side expressed its readiness to pay a visit to Kyrgyzstan as the situation with the coronavirus pandemic stabilizes, for further implementation and detailed discussion of projects in the field of women's entrepreneurship with the Kyrgyz side.