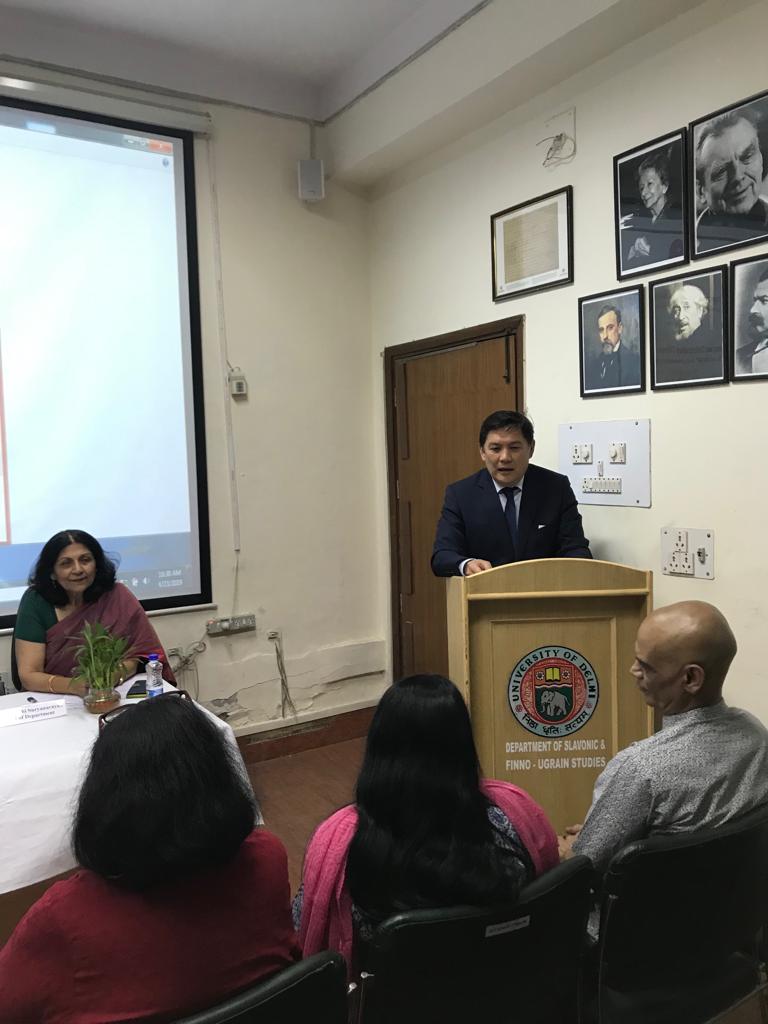 On April 23, 2019 in the Delhi University at the Faculty of Slavic and Finno-Ugric languages a scientific-practical conference “Reading and Celebrating Chingiz Aitmatov” was held, dedicated to the 90th anniversary of the great Kyrgyz writer. Delhi University is the oldest educational institution in northern India and was founded in 1926.

Ambassador Asein Isaev and diplomats of the Kyrgyz Embassy in India took part in the preparation and participation in the conference. Within the framework of the conference, the Embassy has assisted in organizing a photo-exhibition about the life of C.Aitmatov. The University of Delhi has prepared an exhibition of publications of writer's works in Hindi, Bengali, Telugu, Malavi and other languages of India, as well as in Polish and Hungarian.

On the conference Ambassador A.Isaev, scientists from Delhi University and other famous universities of India spoke about the novels of C.Aitmatov.

As Ambassador A.Isaev underlined, Chingiz Aitmatov played a huge role in shaping the modern literature. His works, translated into many languages of the world, give answers to the challenges that humankind is experiencing at present and the coverage of the issues that he touched in his novels make his figure significant in depth and importance. He is one of the greatest personalities of our time.

According to the speeches of professors Neelakshmi Suryanarayan, Nazar Rumi, Ranjana Saxena, Manu Mittal and others, the significance of Chingiz Aitmatov lies in the fact that his works has become a connecting bridge between civilizations, nations, culture, languages, and his ideas of humanity and tolerance are consonant with humanism of Indian philosophy.

The main value of Chingiz Aitmatov's creativity is a call for preserving the best qualities of an individual and whole mankind, which in the conditions of modernity becomes the most difficult task.

At the conclusion of the conference, the participants were shown a documentary film “The Master's Testament” about the work and life of Chingiz Aitmatov, created by director T. Jumabaev.