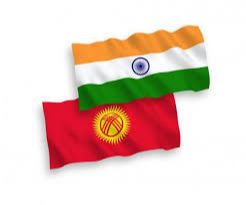 On November 3, 2020, at the request of the Kyrgyz side, Ambassador of the Kyrgyz Republic in India Asein Isaev met with the Deputy Minister of Foreign Affairs of India (Secretary West) Mr. Vikas Swarup.

During the meeting Ambassador Isaev presented full information about the current socio-political situation in the Kyrgyz Republic, past political changes, legitimization of the new government and the peaceful change of the country’s leadership.

Deputy Foreign Minister Mr.Swarup stressed that all the agreements reached between India and Kyrgyzstan remain in force and their implementation will continue, without waiting for the election and approval of the leadership of the Kyrgyz Republic after the presidential and parliamentary elections in Kyrgyzstan.

The Indian side, as the largest democratic country in the world, expressed support for democratic processes in the country and satisfaction with the rapid legitimization of power. It was noted that the invitation by India to the leadership of the Ministry of Foreign Affairs of the Kyrgyz Republic to take part in the second meeting of the Ministers of Foreign Affairs of the India-Central Asia Dialogue, in fact, is a recognition of the ongoing changes in the country.

India also expects the participation of the Prime Minister of the Kyrgyz Republic Mr.Sadyr Zhaparov in the meeting of the Council of Heads of Governments (Prime Ministers) of the SCO Member States chaired by India on November 30, 2020.

At the end of the meeting, the Secretary West Mr. Vikas Swarup wished Kyrgyzstan to hold a successful presidential and parliamentary elections.