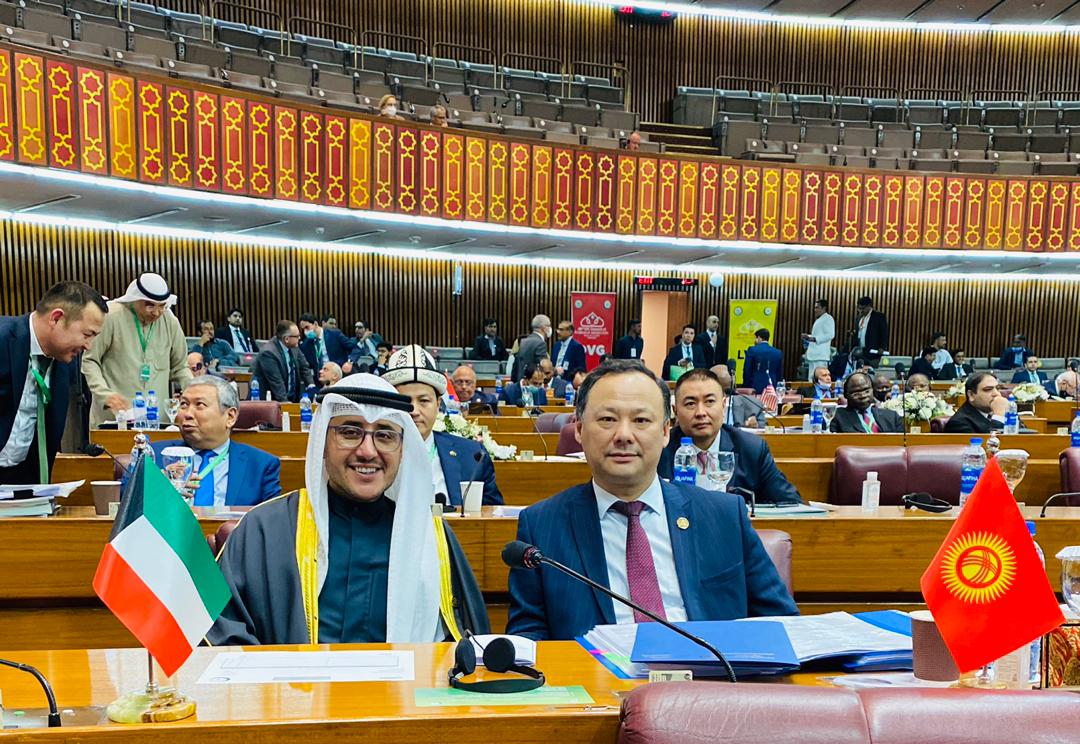 On March 23, 2022  Ruslan Kazakbaev, Minister of Foreign Affairs of the Kyrgyz Republic, held the meeting with Dr. Ahmed Nasser Al-Mohammed Al Sabah, Minister of Foreign Affairs and Minister of State for Cabinet Affairs of the State of Kuwait, in the framework of the 48th session of the Council of Ministers of Foreign Affairs of the Organization of Islamic Cooperation in Islamabad.
During the meeting, the parties expressed satisfaction with the high level of bilateral relations between Kyrgyzstan and Kuwait. It is trade and economic ties, as well as stable political contacts at the highest and high levels that make it possible to be optimistic about the prospects for their expansion and enhancement in the near future. Direct flights between the countries are one of many examples of this.
Minister A.Al Sabah emphasized the importance of further implementation of the agreements reached following the results of the meeting between the President of the Kyrgyz Republic His Excellency Mr. Sadyr Zhaparov and Prime Minister of the State of Kuwait His Excellency Sheikh Sabah Al Khalid Al Sabah in the framework of the Conference of the Parties to the UN Framework Convention on Climate Change in November 2021 in Glasgow .
The Kyrgyz side called for strengthening trade and investment cooperation, affirming its strong interest in  holding the next 3rd meeting of the Intergovernmental Commission in Kuwait in 2022 as soon as possible.
The parties agreed to complement the content of the planned visit of the President of the Kyrgyz Republic to Kuwait this year, highlighting the need for speeding up the negotiating process for a number of important agreements in the political, trade and investment, cultural and educational and other fields, as well as preparing them for signature.
Before organizing the visit of the highest level, Ruslan Kazakbaev expressed his readiness to visit Kuwait in the very near future to "synchronize the watches" on the above-mentioned issues. At the same time, A.Al Sabah confirmed his intention to visit Kyrgyzstan in May this year.
The parties also agreed to make further joint efforts for strengthening Islamic solidarity in order to protect the interests of the common Islamic Ummah for the sake of peace, interfaith harmony and mutual understanding between peoples.
With a view to establishing direct interaction between the private structures of the two states and diversifying trade relations between the countries R.Kazakbaev proposed holding the Kyrgyz-Kuwaiti business forum with the participation of business communities of two countries in Kyrgyzstan.
Referring to the issues of international and regional security, the parties discussed the situation around Ukraine, while the Kyrgyz side noted that it stood out for the early settlement of the conflict exclusively by political and diplomatic means at the negotiating table, expressing its readiness to provide mediation services to resolve the crisis.