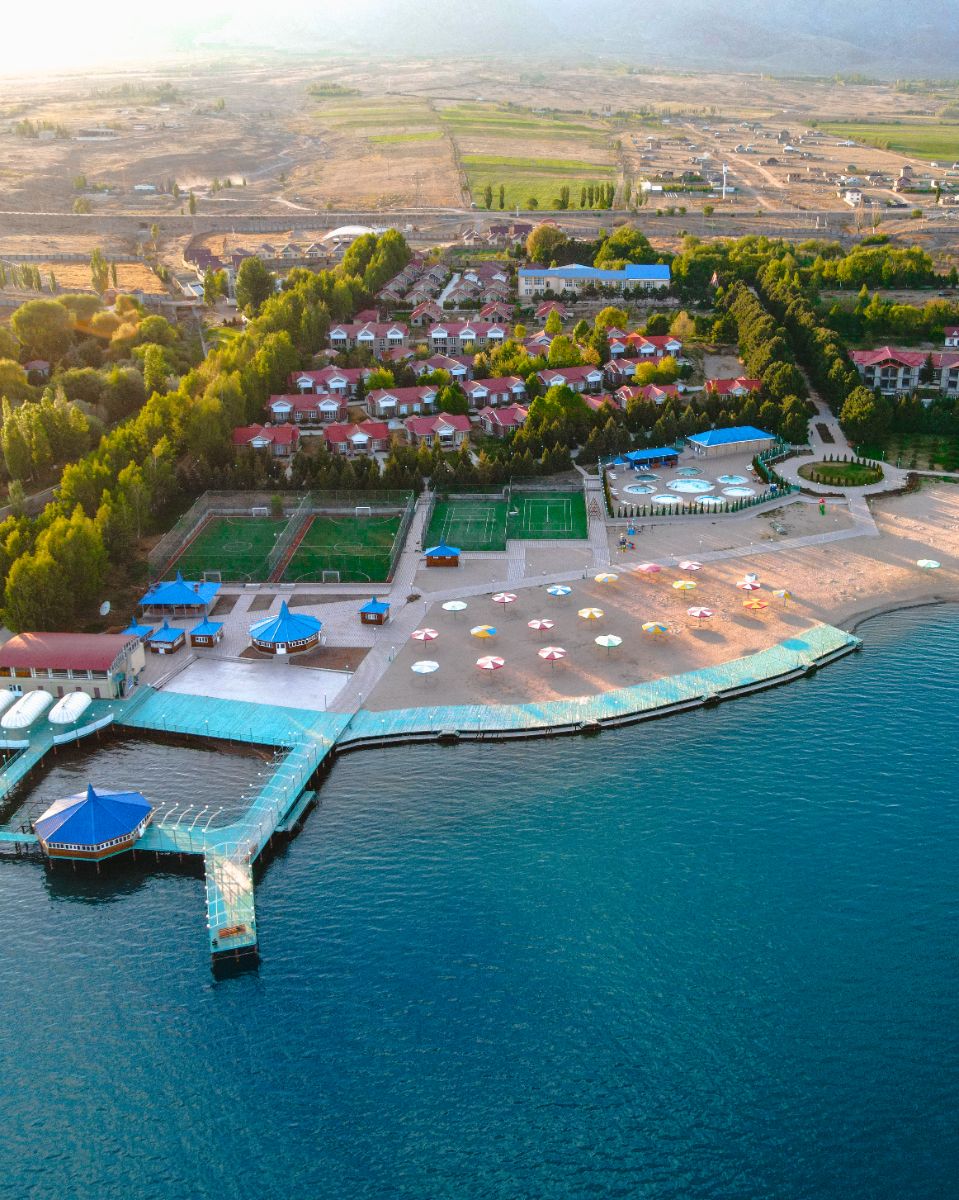 The Kyrgyz Republic is located in the north-east of Central Asia, occupying part of the Tien-Shan and the northern chains of the Pamir-Alai mountains. Borders are mainly on natural boundaries - the crests of high mountain ranges and rivers, and only in some places down to the plains of Chui, Talas, and Fergana Valley.

Kyrgyzstan has its borders in the North - with Kazakhstan, to the west and north-west - with Uzbekistan, in the south-west with Tajikistan, and in the south and south-east - with China. The total area of ​​the Kyrgyz Republic is 198.5 square kilometers. 94% of the country is covered with mountains. The average height - 2750 meters above sea level.

Bishkek City is the political, economic, scientific, administrative, historical, and cultural center of the Kyrgyz Republic. It is also the location of the supreme bodies of state power of the republic, embassies, and representative offices of foreign states. The territory of the city is 127.3 square kilometers.

The Kyrgyz Republic gained its independence on 31 August 1991. Kyrgyzstan, as a parliamentary republic, is an independent, secular, democratic and legal state. The president is elected by popular vote for a term of 5 years, with the right of re-election for a second term. The current president of Kyrgyzstan is Sadyr Japarov.

In Kyrgyzstan, there are more than 6.6 million people. Of these Kyrgyzs - 74%; Uzbeks - 14%; Russian - 6%; Kazakhs, Tajiks, Uighurs, and other ethnic groups - 6%. More than 80 nationalities live in Kyrgyzstan nowadays.

The state language of the Kyrgyz Republic is the Kyrgyz language.  Russian is used as the official language.

Kyrgyzstan is home to the magnificent Tien Shan and Pamir-Alai mountain ranges, which constitute 90 percent of the territory of this beautiful, pristine and rugged land in the heart of Central Asia. With 29 peaks over 4,000 meters and 45 over 3,000 meters, its dramatic scenery lives up to its pledge as the Land of Celestial Mountains.

Kyrgyzstan offers more than 200 trails for avid hikers and lovers of riding horseback. For climbers, the country boasts some of the highest points in the world - the famous Pobeda and Khan Tengri Peaks - both towering more than 7,000 meters above the earth. More than 50 national parks and forest preserves present nature in its myriad forms. Tours by foot, bicycle, or horseback can be arranged easily. In fact, for mountainside travel, most Kyrgyz still use horses as the most effective mode of transportation.

There are more than 2,000 high altitude lakes nestled in Kyrgyzstan's Tien Shan mountain range. Since antiquity, people have passed on many legends about the origins of these spectacular lakes. Lake Son-Kul, at more than 3,000 meters above sea level, draws visi­tors from around the world. Several yurt camps along its shores offer a unique glimpse into the mountain traditions of Kyrgyz nomadic culture.

The resorts and guest houses surrounding Lake Issyk-Kul - the second deepest lake in the world at 668 meters - offer visitors a touch of beach experience at the center of the great Asian land mass. Fed by hundreds of underground springs, its name means "hot lake" because the mildly saline lake never freezes.

Lake Issyk-Kul offers a breathtaking view of its dozens of encircling mountain peaks. This ring of mountains protects Issyk-Kul from cold air invading from the north and hot air rising from the south, granting travelers a pleasant and comfortable microclimate that offers every opportunity for rest and relaxation. Mountain-sea breezes, low humidity, clean air, abundant solar heat, water infused with therapeutic minerals, hot springs and mud treatments will revive the health and spirits of all visitors. Sports enthusiasts will enjoy sailing on Lake Issyk-Kul.

Kyrgyzstan's rugged terrain has always attracted sports enthusiasts from around the world. Chains of mountains stretching across the country beckon mountain climbers looking to conquer summits widely known to international climbers or those less well explored. Expert mountaineers are drawn by the prospect of scaling Kyrgyzstan's four peaks over 7,000 meters. For skiers, Kyrgyzstan offers 13 resorts, several of which can accommodate overnight stays.

Mountain peaks are also the source of the raging rapids that entice fans of rafting and kayaking. The Chu River cuts through the Gorge Boom, the national arena for white wa­ter sports. Extreme athletes can experience whirlpools of churning water beneath over-handing cliffs, forcing even the most experienced rafters to be on constant alert.

For two millennia, the Great Silk Road was the key trade route linking the pinnacles of eastern and western civilization. Caravans, laden with people and goods, crossed mountains, deserts, rivers and continents, spreading ideas, technologies, religions, and wealth to peoples and cultures along their path.

A primary artery of the Great Silk Road passes through the Land of the Kyrgyz, whose hospitality and mountain springs offered respite from the desert lands of neighboring peoples. The dales and valleys of the Tien-Shan provided shelter for the merchants, workers, clergy and soldiers who journeyed the 6,500 kilometers between east and west. At the height of the Silk Road's significance, three trade routes traversed Kyrgyzstan, prompting UNESCO to name the Chang'an-Tianshan Corridor a World Heritage Site in 2014. The well-preserved Tash Rabat Caravanserai, at 3,200 meters in Kyrgyzstan's Naryn Province, is a classic example of 15th-century lodging for Silk Road travelers. Tourists can revisit these historical routes and World Heritage Sites by horseback, off-road vehicle, bicycle or motorbike, some of which are served by yurt camps.

Kyrgyzstan represents a great destination for ethnographic tours. Ancient petroglyphs on the walls of mountain caves date back to the 8th century BC, and ancient burial grounds near battlefield sites throughout the country mark the passing of various cultures and people through Kyrgyz lands. Roughly 5,000 historical and cultural places across the country offer snapshots of Kyrgyzstan's ancient past. Excavations in the shallower waters of Lake Issyk-Kul reveal the architectural remains and preserved artifacts of an advanced civilization of considerable size.

In southern Kyrgyzstan, the City of Osh in the rich Fergana Valley draws many admirers of ancient artifacts, mausoleums and mosques. In the heart of the city, Mount Sulaiman-Too, named for the Prophet Solomon, features 101 human and animal petroglyph sites and 17 identified ancient places of worship that bear witness to its role in the religious rites of antiquity. Two 16th century mosques, largely restored, confirm that Sulaiman-Too served worshippers from both Islamic and pre-Islamic times. Located at the cross­roads of a Silk Road artery, the mountain is a UNESCO Cultural Heritage Site. Its museum, built into a cave, displays relics of its history through the ages.

The masterpiece epic Manas is a cornerstone of the cultural heritage and oral traditions of the nomadic Kyrgyz people, whose written lines have been recorded only in modern times. Consisting of more than 500,000 lines - 20 times longer than the Homeric Iliad and Odyssey combined - the poem describes the life and heroic exploits of the legendary hero, Manas, who fought for Kyrgyz independence from China in 995 A.D. The Manas epic is recorded on the UNESCO Intangible Cultural Heritage list.

The story of Manas is replete with colorful descriptions of daily life and illustrates the tra­dition, customs, festivals and ceremonies observed by the Kyrgyz toward the end of the first millennium AD. Professional narrators of the poem are called manaschi - storytell­ers. The most talented of manaschi fall into a trance during recitation, which takes place over several days and enthralls listeners with the world of hero warriors, their troops, enemy hordes, political intrigue and betrayals. In the end, good triumphs over evil. Ma­naschi represent the cultural heart of the Kyrgyz nation and enjoy widespread honor and respect.

Kyrgyzstan has a rich nomadic heritage and traditions that have been woven into the identity of the Kyrgyz people. During summer months, many families continue to graze their herds in moun­tain meadows, called jailoos, preserving old customs and ways of nomadic life. Everywhere in Kyr­gyzstan, there are signs of the vibrant ancestry that still influences the lives of the Kyrgyz people.

Sports and other types of competitions were hallmarks of Kyrgyz nomadic life. Sports were al­ways considered the key to healthy living that cultivated an inner spiritualism. Every man had to possess athletic prowess to compete in contests of strength, agility, and resilience, central to the definition of Kyrgyz manhood. In nomadic tradition, all competitions took place on horseback where the rider and horse formed an integral whole.

The most popular Kyrgyz equestrian games are still observed today through both formal and infor­mal competitive events. Horsemanship dominates all competitions, including At Chabysh (horse racing at 20-30 kilometers per hour over long distances) and JorgoSalysh (horse racing for shorter distances). No less thrilling is the battle of horsemen called Oodarysh, as well as the collective I* struggle of two teams vying for possession of an animal carcass called UlakTartysh or KokBoru.

The nomad clans of Kyrgyzstan were famous for their hospitality, kindness and openness, the same traits that continue to this day. Guests have always been welcome and honored among the Kyrgyz people. There were three types of guests: First, mildetuukonok were "obligatory guests" arriving for attendance at a wedding or funeral, and accommodations for these guest would be distributed among related families or entire villages. Second, taanyshkonok "familiar guests" might include distant relatives or friends, who could be treated more casually, depending on the relationship between the host and guest. The third type was kydalykonok "god's guests," such as travelers who might ask for shelter. Kyrgyz families were obliged to provide food and a night's shelter to anyone who stopped near their home at sunset and asked if they could stay. If the fam­ily were too poor, then relatives would be required to come to their assistance. It was important to preserve the good name of the clan and avoid "evil gossip" about their lack of hospitality.

Nomadic life has left an indelible mark on the culinary heritage of the Kyrgyz people. Ownership of livestock was the primary indicator of material wealth among Kyrgyz nomads, and, accord­ingly, meat was and still is the star of Kyrgyz cuisine. Beef, lamb and goat that grazed in mountain jailoos, continue to dominate the table of Kyrgyz families and their frequent guests. Vegetables and grains, for example, require cultivation of the land, and, therefore, were not a staple of the traditional Kyrgyz diet.

The incomparable beshbarmak (five fingers) is often a standard item on menus. Prepared through a unique process, the lamb is minced finely with a sharp knife then boiled with wheat noodles and flavored with a spiced onion sauce, called chyk. When eating beshbarmak, it is ad­visable to forget about cutlery and just use your fingers so that you can concentrate fully on the flavors while you sip the drink of nomads, kymyz - sour mare's milk. In all typical meals, there is a wide selection of cold starters, generally sausages and meat delicacies.

Additionally, since the beginning of 2019, a visa-free regime was introduced for citizens of Mon­tenegro, the Principality of Andorra, the Argentine Republic, the Federative Republic of Brazil, the Republic of San Marino, the Republic of Chile and the Sultanate of Oman. On September 1, 2017, the Electronic Visa of the Kyrgyz Republic (E-Visa) system began to func­tion, allowing citizens of all foreign countries to receive entry-exit tourist or business visas of Kyrgyzstan for up to 90 days (www.evisa.e-gov.kg).

Consequently, Kyrgyzstan widely opens its door and its heart to guests of many countries. Come to explore our history, culture, and hospitality!

We suggest to you get acquainted with a 3D panoramic map of the sights of the Kyrgyz Republic and video clips about the tourist potential of our country:

2) Photo and video materials about the tourism potential of Kyrgyzstan -