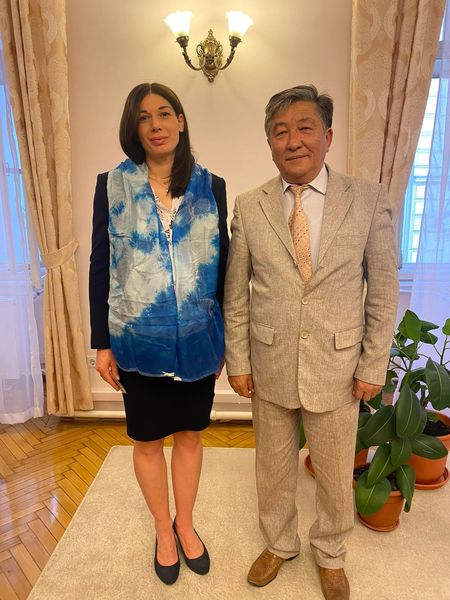 On July 13, 2022, the Ambassador of the Kyrgyz Republic to Hungary, Talantbek Kushchubekov, met with the Deputy Mayor for Cultural Affairs of Budapest, Anett Bősz. During the meeting, were discussed the issues of cooperation between the cities of Bishkek and Budapest, including in the cultural and humanitarian sphere, as well as the implementation of joint projects and plans for 2022.

Ambassador T. Kushchubekov congratulated A. Bősz on her election to the post of Deputy Mayor of Budapest and, expressing gratitude to the Hungarian side for assisting in naming a square in Budapest after Chingiz Aitmatov, stressed Hungary’s careful attitude to the memory of the great Kyrgyz writer and discussed the issue of establishing his monument, as well as plans for further beautification of the square.

Ambassador T. Kushchubekov also informed about the planned organization of a number of cultural events between the two countries, including the Days of Culture of the Kyrgyz Republic in Hungary in the second half of this year.

The parties agreed to continue cooperation on the issues of intensifying bilateral relations.