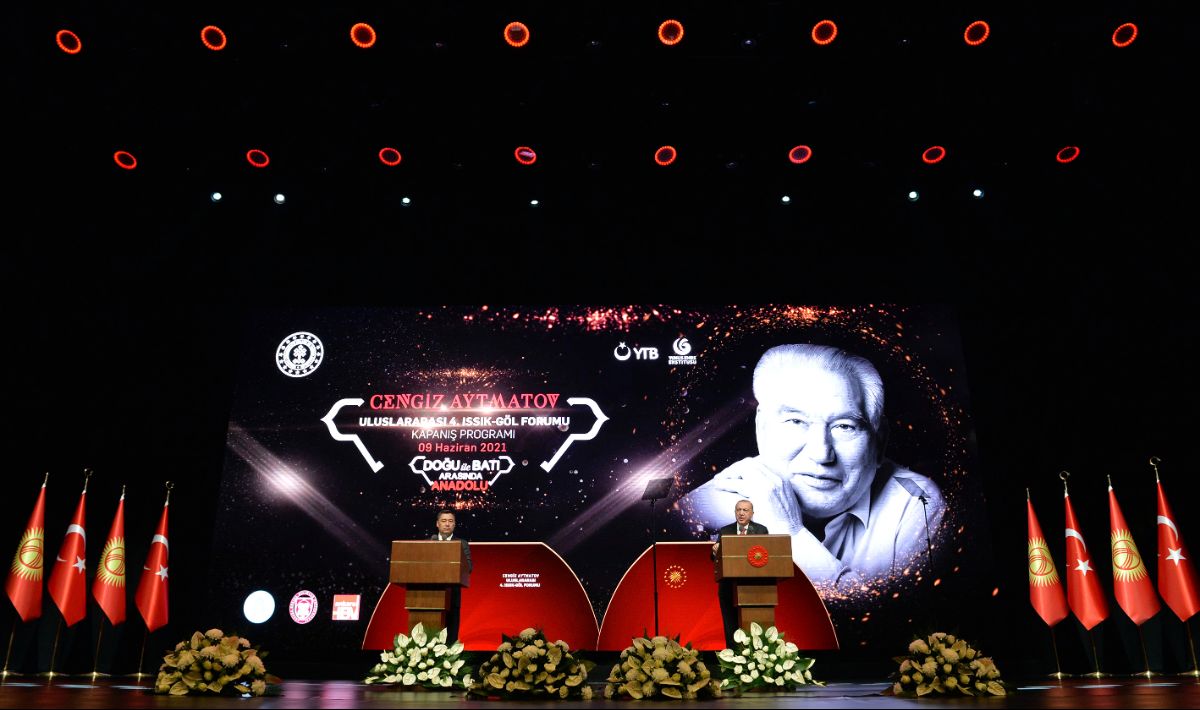 On June 9, 2021, President of the Kyrgyz Republic Sadyr Zhaparov and President of the Republic of Turkey Recep Tayyip Erdogan took part in the closing ceremony of the IV International Issyk-Kul Forum named after Chyngyz Aitmatov, which was held in Ankara.

After the heads of state arrived at the event, the national anthems of Kyrgyzstan and Turkey were played.

Further, the forum participants were shown a video about the work of Ch. Aitmatov and his great role in the development of world culture and literature.

The first speach was given to President Sadyr Zhaparov, who expressed his deep gratitude to the Turkish people and Recep Tayyip Erdogan for organizing the Issyk-Kul Forum named after Chyngyz Aitmatov, confirming that the glorification of the planetary heritage of the great writer continues.

“The appearance of Chyngyz Aitmatov on the literary arena amazed millions of readers on five continents. The birth of a talented writer from the Kyrgyz people, who raised the prestige of the entire Turkic-speaking world, came as a surprise. He made an unprecedented leap in the history of the Central Asian republics in the 20th century,” the Head of State said.

He briefly spoke about the history of this forum, which was initiated in 1986 by Chyngyz Aitmatov himself, for the first time organizing an informal meeting of world intellectuals to discuss future global problems of mankind and exchange views on them on the shore of Lake Issyk-Kul.

The President emphasized that the life of Chyngyz Aitmatov, his literary heritage, wise words and thoughts that he expressed through his works are a spiritual treasure that requires deep study.

Sadyr Zhaparov noted that after officially taking office as the President of the Kyrgyz Republic, he signed his first Decree "On the spiritual and moral development and physical education of the individual."

He spoke about the main goals of the Decree: along with high moral standards, national traditions, traditional family and social values, education of citizens through universal human values ​​that reflect the uniqueness and unity of cultures of all peoples.

“Therefore, as Aitmatov stated, human values ​​prevail over certain ethnic and national interests, and the creative power of a rational person opens the way to peace.

At the same time, the role of national culture in the development of human civilization dominates. Without the same language and the same culture, the world would be different. Preserving diversity requires multifaceted and coordinated actions,” the Head of State said.

In this regard, Sadyr Zhaparov noted that the World Nomad Games have become a platform for spreading traditions in the universe. According to him, these games are an attempt to preserve an important part of the cultural heritage of a nomadic civilization. He wished good luck to the IV World Nomad Games, which will be held in Turkey next year.

“Another lesson from Aitmatov is the environmental problem expressed in the images of the snow leopard Jabars, the she-wolf Akbara, the Aral Sea and glaciers. If the chain of nature is in any way damaged, it is difficult to restore it. Aitmatov's works laid the foundations for a fundamentally new view of this.

So, our Aitmatov is a person who has contributed to the planetary consciousness. The great thoughts of the great writer of the Turkic peoples deserve eternal praise,” President Sadyr Zhaparov said, urging everyone to spread Aitmatov’s ideas to all of humanity.

After the completion of the speeches, the organizers solemnly presented the final document of the Forum to the Presidents.