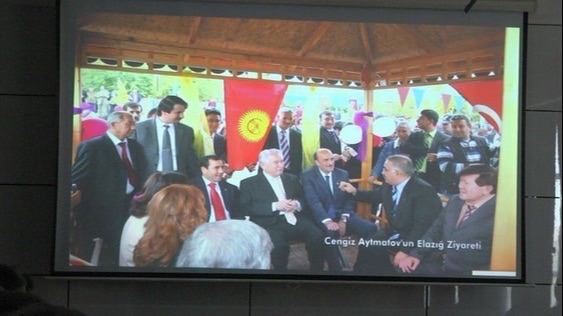 On May 13, 2022, during of working visit to Elazig, with the participation of Ambassador Kubanychbek Omuraliev, cultural and literary figures, journalists, as well as citizens of the Kyrgyz Republic living in this city was held an event in memory of Chingiz Aitmatov.

During the event by representatives of culture and literature of Elazig province was shown documental film about the stay of a Kyrgyz writer in Elazig in 2007 and his participation in the Khazar Poetry Festival, whereby was opened park in his honor. The participants of the event shared warm memories of the meeting with ChingizAitmatov, noting that this visit was historical.

In conclusion, the parties agreed to jointly install a monument to the writer in the abovementioned park.

Also, Ambassador Omuraliev held a meeting with the citizens of the Kyrgyz Republic, whereby were discussed issues of protecting their rights and interests and provided answers to their questions.