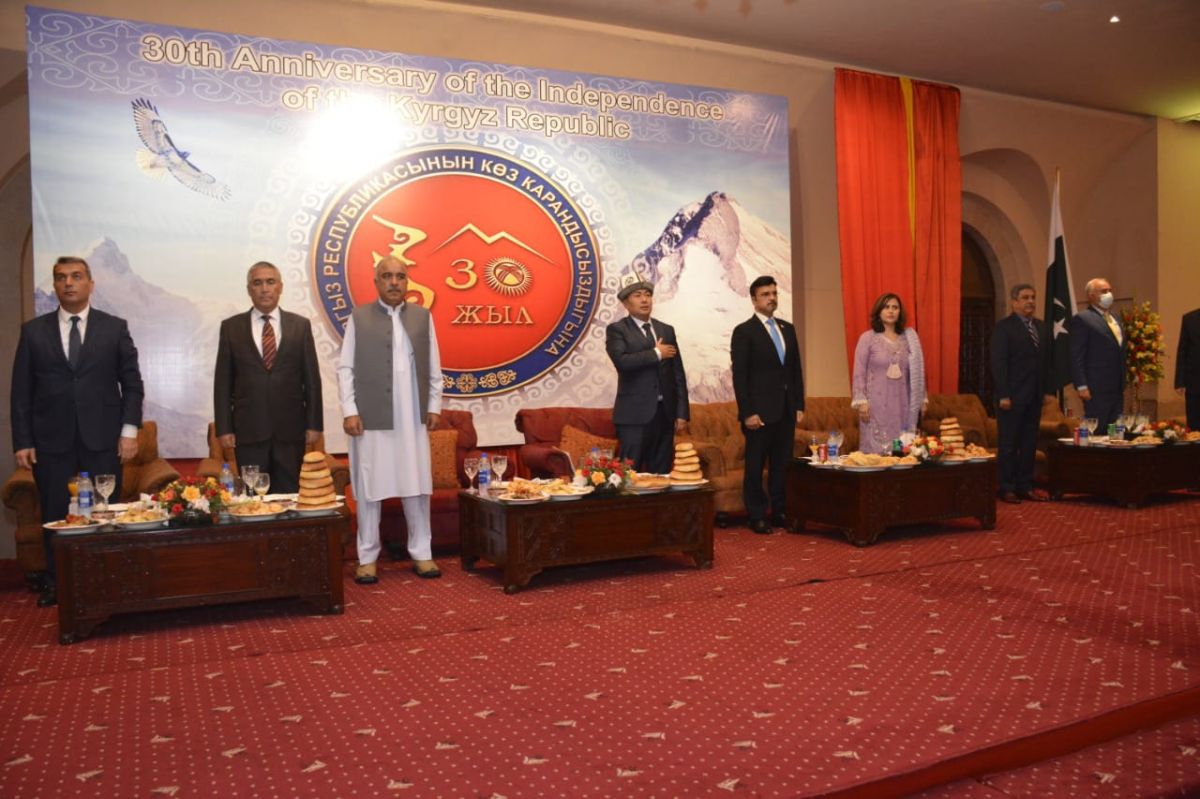 On September 30, 2021, a solemn reception organized by the Embassy on the occasion of the 30th anniversary of the Independence Day of the Kyrgyz Republic was held at the Serena Hotel in Islamabad.

In his speech, Ambassador Extraordinary and Plenipotentiary of the Kyrgyz Republic to the Islamic Republic of Pakistan H.E. Mr. Ulanbek Totuiaev greeted his colleagues in the diplomatic corps, as well as numerous Pakistani friends, with whose participation bilateral cooperation in political, economic, humanitarian and other spheres is developing and strengthening.

Ambassador U. Totuiaev informed on main achievements of the country's independence, highlighting the commitment of the Kyrgyz Republic to further intensify Kyrgyz-Pakistani cooperation.

The Ambassador expressed gratitude to the Islamic Republic of Pakistan for the support provided to Kyrgyzstan and expressed confidence that bilateral relations will consistently develop in the future, and the countries will remain not only reliable partners, but also good friends.

As the Honorable Guest of the event, the Governor of Khyber Pakhtunkhwa Province, Mr. Shah Farman, in his speech congratulated the Kyrgyz Republic on Independence Day and noted that Pakistan and Kyrgyzstan have close historical, religious and cultural ties.

Mr. Shah Farman assured that Pakistan, together with the leadership of Kyrgyzstan, is ready to reveal the enormous potential of bilateral cooperation and constantly bring interaction to a new level.

At the end of his speech, the Governor noted that “the seaports of Pakistan are always open for brotherly Kyrgyzstan”.

As part of the evening, the guests of the reception got acquainted with a thematic photo exhibition and products of Kyrgyz manufacturers, as well as enjoyed the atmosphere of Kyrgyz hospitality, having visited inside a Kyrgyz yurt and tasted national dishes.

The guests were also shown videos about tourism and investment opportunities in Kyrgyzstan, booklets with information about Kyrgyz companies were distributed.

The evening was accompanied by a concert program of Kyrgyz artists who specially arrived in Pakistan at the invitation of the Embassy.

The event took place in a solemn and friendly atmosphere.