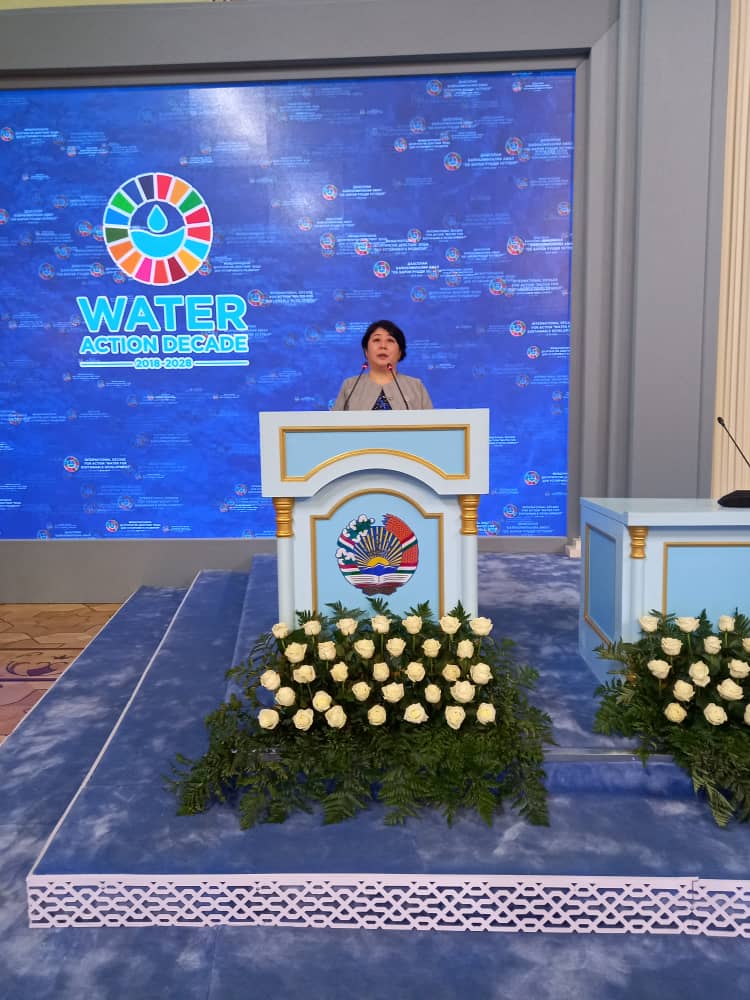 As part of participation in the Second High-Level International Conference on the International Decade for Action “Water for Sustainable Development” in Dushanbe, on June 8, Ms. Dinara Kemelova, Deputy Minister of Foreign Affairs of the Kyrgyz Republic made a speech at the plenary session “Promoting action and partnerships in the field of water resources at the local, national, regional and global levels.

Ms. Kemelova drew attention to the importance of providing clean drinking water to the population of Kyrgyzstan, noting that 20% of the country's population still does not have water access in the speech.

She noted that water is a vital natural resource for ensuring food and energy security, in connection with which she called for preserving the zones of formation of water resources and actively introducing mechanisms for the rational use of water, including water-saving technologies, as well as developing mechanisms for mutually beneficial regional cooperation on the water-energy sphere.

Ms. Kemelova also informed that the Kyrgyz Republic throughout its independence remains a supporter and leader of international initiatives on sustainable mountain development, and conservation of biodiversity and glaciers.

Taking this opportunity, the Head of the delegation invited investors, international financial institutions, climate funds, and corporations to support and implement projects aimed at climate change mitigation in the region and the adaptation of the socio-economic sectors of Kyrgyzstan, the construction of hydroelectric power plants, which are environmentally friendly energy sources.

As part of the event, Ms. Dinara Kemelova, Deputy Minister of Foreign Affairs of the Kyrgyz Republic held a meeting with Ms. Natalia German, Special Representative of the UN Secretary-General for Central Asia / Head of UNRCCA, during which the parties discussed the mountain initiatives of Kyrgyzstan at the UN system, the promotion of water cooperation in the region, as well as topical issues of preventive diplomacy.

Ms. Dinara Kemelova also met with the Special Representative of the President of the Republic of Tajikistan Mr. S.Rakhimzoda, where they discussed issues of reforming the IFAS and its structural bodies, as well as promoting an active dialogue on the use of water and energy resources in Central Asia.

Representatives of the Ministry of Natural Resources, Ecology, and Technical Supervision of the Kyrgyz Republic Mr. T.Bozgunchiev and the Ministry of Agriculture of the Kyrgyz Republic Mr. B. Mamytov took part in the thematic sideline events: “Water and Climate: Strengthening the Linkages” and “Strengthening the Water, Energy and Food Connectivity in the Post-COVID Recovery”.

During the events, they called on international partners to support the measures taken by Kyrgyzstan to adapt to climate change, with an emphasis on the conservation of glaciers, forests, and biodiversity, and also advocated the practical implementation of the rule in the field of water use - “water-food-energy”, which is consistent with the achievement of the Goals in the field sustainable development.