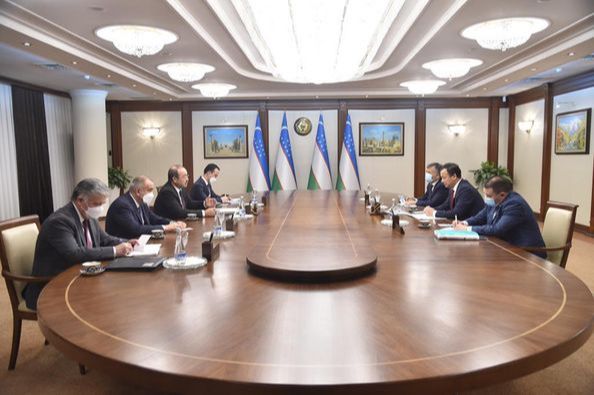 H.E. Mr. Ruslan A. Kazakbayev informed about the internal political situation in the Kyrgyz Republic and assured that the Kyrgyz side remains fully committed to all its international obligations and strict implementation of previously signed international treaties. Expressed gratitude for the assistance provided to Kyrgyzstan in the fight against the COVID-19 pandemic.

The head of the Government of Uzbekistan conveyed words of respect and best wishes to the President, Prime Minister of the Kyrgyz Republic H.E. Mr. Sadyr Zhaparov.

The sides discussed the whole range of Kyrgyz-Uzbek mutually beneficial cooperation in the political, trade, economic, cultural, humanitarian, water and energy spheres, as well as in the field of transport. Particular attention is paid to the issue of jointly combating the COVID-19 pandemic. They noted the importance of implementing projects for the construction of the China-Kyrgyzstan-Uzbekistan railway and trade and logistics centers in the border areas, as well as joint implementation of projects in the hydropower sector.

H.E. Mr. Abdulla Aripov voiced the readiness of the Uzbek side to provide support to Kyrgyzstan in carrying out forthcoming reforms, financial, technical and food assistance for the development of the economy of the Kyrgyz Republic, including in the fight against COVID-19. In addition, the Uzbek side expressed its readiness to build a medical and recreational facility in Kyrgyzstan. He noted the importance of implementing the Agreement between the Government of the Kyrgyz Republic and the Government of the Republic of Uzbekistan on financial cooperation, signed on December 13, 2017, in Tashkent.