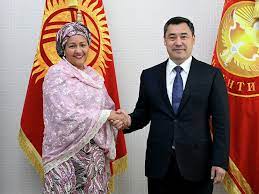 During the meeting, views were exchanged on topical issues of cooperation between Kyrgyzstan and the UN.

The head of state warmly welcomed the guest and congratulated her on her reappointment to the post of UN Deputy Secretary General and wished her further success in her high position.

The president noted the important role of the organization in ensuring peace and security, solving global socio-economic problems and making important decisions on topical issues of the world agenda.

The head of state also highlighted Kyrgyzstan's initiative, adopted at the 76th session of the UN General Assembly on December 16, 2021 to declare 2022 as the International Year of Sustainable Mountain Development.

He noted that in September this year we are planning to hold a high-level meeting on sustainable mountain development during the High-Level Week of the 77th session of the UN General Assembly.

President Sadyr Zhaparov added that during this event he will propose a number of initiatives for the implementation of programs and projects that effectively protect the interests of mountain countries, solving the problems of mountain regions, programs for the creation of a fund for their development, for the prevention of natural disasters, sustainable energy and access to modern technology and innovation.

She briefly told the head of state about the goals of her visit, the main of which was to further develop cooperation between the Kyrgyz Republic and the UN.

Amina Mohammed congratulated Sadyr Japarov on the 30th anniversary of Kyrgyzstan's membership in the Organization.

The UN Deputy Secretary-General noted her satisfaction with Kyrgyzstan's work at the national, regional and global levels. She also supported Kyrgyzstan's efforts to peacefully resolve its dispute with the Canadian company Centerra Gold Inc.

In conclusion, Amina Mohammed expressed her hope for the participation of the Kyrgyz delegation headed by President Sadyr Japarov in the next conference of the parties on climate in November this year.