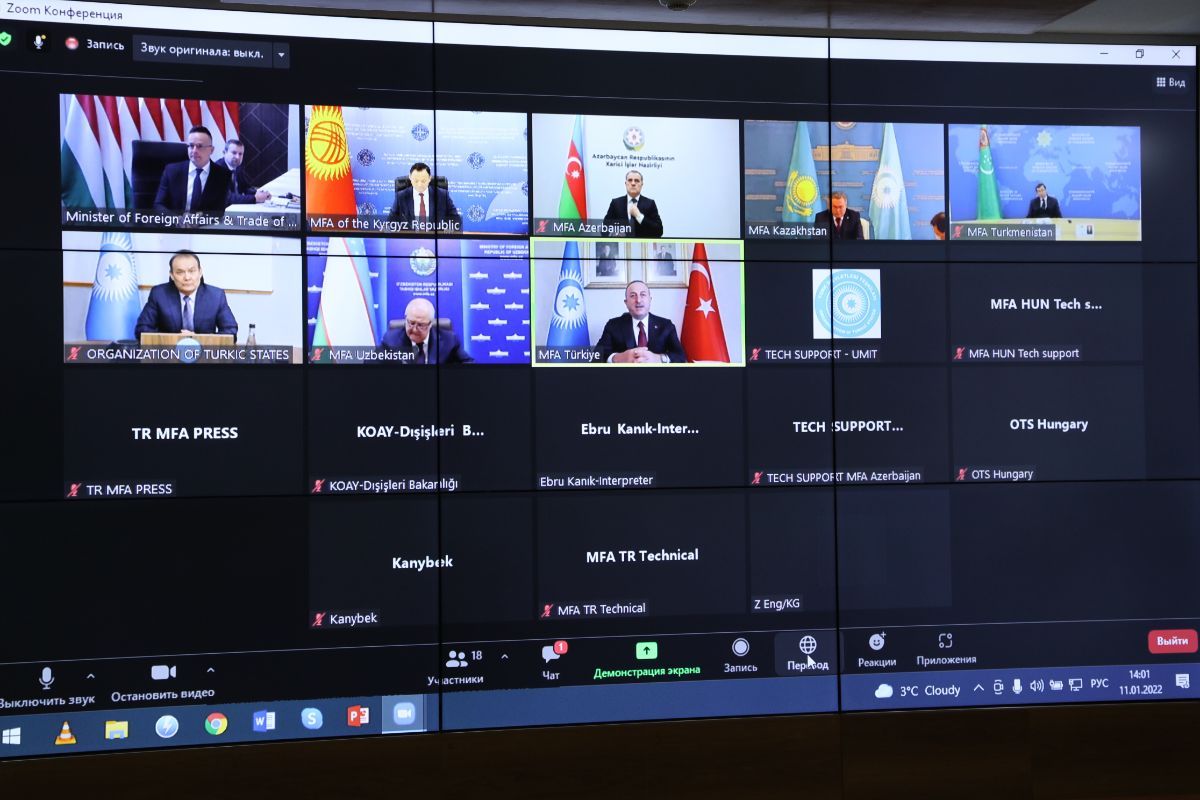 On January 11, 2022, the Minister of Foreign Affairs of the Kyrgyz Republic Ruslan Kazakbaev took part in an extraordinary meeting of the Council of Foreign Ministers of the Organization of Turkic States (hereinafter - OTS) on the situation in the Republic of Kazakhstan.

The meeting of the heads of the foreign ministries of Azerbaijan, Kazakhstan, Kyrgyzstan, Turkey, Uzbekistan, Turkmenistan and Hungary was initiated by the Turkish side, as the Chair-in-Office at the Organization of Turkic States.

Within the meeting, the Parties expressed deep condolences to the Kazakh side due to the loss of life during the clashes and wished a speedy recovery to all injured. Particular emphasis is placed on the fact that Kazakhstan, a fraternal Turkic state, one of the founders of the Organization of Turkic States and the main goal of this meeting is the manifestation of solidarity with the Kazakh side.

The Minister of Foreign Affairs of the Kyrgyz Republic in his speech said that since the first days of 2022, Kyrgyzstan has been closely following the latest developments in neighboring Kazakhstan. Kyrgyzstan condemns terrorism in all its forms and manifestations. Sincerely interested in normalizing the situation and establishing peace in the Republic of Kazakhstan.

H.E. Mr. Ruslan Kazakbaev noted that due to the appeal of the Kazakh side, Kyrgyzstan sent to Kazakhstan a limited contingent of the Armed Forces of Kyrgyzstan in the amount of 150 experienced officers and servicemen of contract service, as well as a number of units of armored and motor vehicles, with a mandate to participate in the peacekeeping operation, exclusively for the protection of strategic objects.

At the same time H.E. Mr. Ruslan Kazakbaev expressed his gratitude to the Deputy Prime Minister and Minister of Foreign Affairs of the Republic of Kazakhstan H.E. Mr. Mukhtar Tileuberdi and, in his person, the leadership of Kazakhstan for the assistance provided to the relatives of the killed citizens of Kyrgyzstan, assistance in the release of detainees, the organization of the evacuation of citizens to their homeland.

At the same time, the head of the foreign affairs agency of the Kyrgyz Republic stressed the need for further close cooperation between the ministries of internal affairs and other competent authorities of the Organization of Turkic States Member States on the facts of offenses committed by foreign citizens during the recent developments in Kazakhstan. Expressed the hope that in each case there will be an open, fair investigation, within the framework of the legislation of Kazakhstan, in strict accordance with the relevant bilateral and multilateral agreements.

The Minister of Foreign Affairs of the Kyrgyz Republic stated the need to timely informing the diplomatic missions of foreign states about the detentions of their citizens in accordance with the requirements of international and bilateral documents in the field of consular relations, and also propose to conduct joint investigations with the competent authorities of the relevant countries on the facts of participation of foreign citizens in the clashes.

Also, the Head of the Foreign Ministry of the Kyrgyz Republic noted the importance of maintaining sustainable economic development of the region so that entrepreneurs, business and interbank relations do not suffer from the current situation.

In addition, the Minister of Foreign Affairs of the Kyrgyz Republic proposed to consider the possibility of organizing a meeting of the Council of Aksakals of the Organization of Turkic States in Kazakhstan in the near future.

H.E. Mr. Ruslan Kazakbaev stressed that the entire Kyrgyz people deeply empathize with the Kazakh brothers in these difficult days and wish for an early settlement of the situation for the benefit of the people. Expressed his satisfaction with the fact that many citizens of Kyrgyzstan, not only in the country, but also abroad, based on the ancient kinship ties between our peoples, are sensitive to the situation and do not stand aside. Informed the participants of the meeting that the Kyrgyz people receive Kazakh brothers at the Bishkek airport and deliver them to the border as car volunteers.

All Member States and Observer States of the Organization of Turkic States expressed their readiness to provide the Kazakh side with comprehensive assistance, if necessary, and request of the Kazakh side.

In conclusion, the Ministers of Foreign Affairs of the Organization of Turkic States Member States adopted a Joint Statement on the situation in Kazakhstan.