А – А А +
Обычная версия
Скрыть
News / News and Events / Press conference on the project "Jamila - a minibus for the disabled in Kyrgyzstan" held in the Bundestag (Parliament) of the Federal Republic of Germany on September 30, 2021 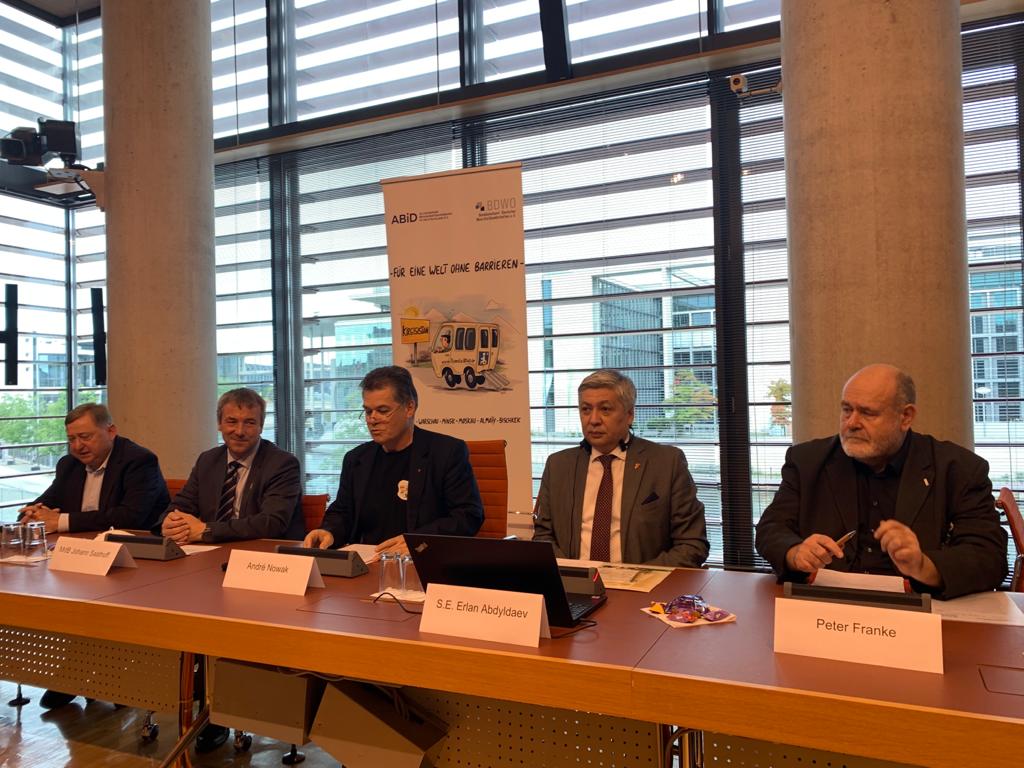 On September 30, 2021 the Ambassador of the Kyrgyz Republic to the Federal Republic of Germany Erlan Abdyldaev took part in a press conference on the project "Jamila - a minibus for the disabled in Kyrgyzstan" held in the Bundestag (Parliament) of the Federal Republic of Germany. The project was initiated by Bundestag deputy Andre Haan to support people with disabilities in Kyrgyzstan.

The press conference was attended by Johann Saathoff, Member of the German Bundestag and Commissioner of the German Federal Government for Cooperation with Russia, Central Asia and the Eastern Partnership countries, André Haan, Member of the Bundestag, Deputy Chairman of the Parliamentary Group "Germany - Central Asia" and representatives of the Federal Association of German Societies West and East (BDWO) and the All German Association for the Disabled "Selbstbestimmung und Würde e.V. (ABiD).

Ambassador E. Abdyldaev in his speech noted the active efforts in Kyrgyzstan to ensure equal rights and opportunities for people with disabilities, including the activities carried out in the country in the framework of the implementation of the provisions of the UN Convention on the Rights of Persons with Disabilities, which was ratified by the Kyrgyz Republic in 2019. The Ambassador thanked the German partners for their support and expressed hope for further cooperation in this area.

Within the framework of this project, a minibus purchased by the German partners, including with the support of the Embassy of the Federal Republic of Germany in the Kyrgyz Republic, will be handed over to the Public Association "Kyrgyz Republic Society of the Disabled" in the coming days in Kyrgyzstan.

For information: Project "Jamila - a minibus for the disabled in Kyrgyzstan" is implemented by the Federal Association of German Societies of the West and the East (BDWO) and the German General Association of the Disabled "Fürbstbestimmung und Würde e.V. (ABiD) and under the patronage of Johann Saathoff, Member of the German Bundestag, German Federal Government Commissioner for Civil Society Cooperation with Russia, Central Asia and Eastern Partnership countries. André Haan, Member of the Bundestag and Vice-President of the Parliamentary Group Germany-Central Asia, is actively involved in the implementation of the project.