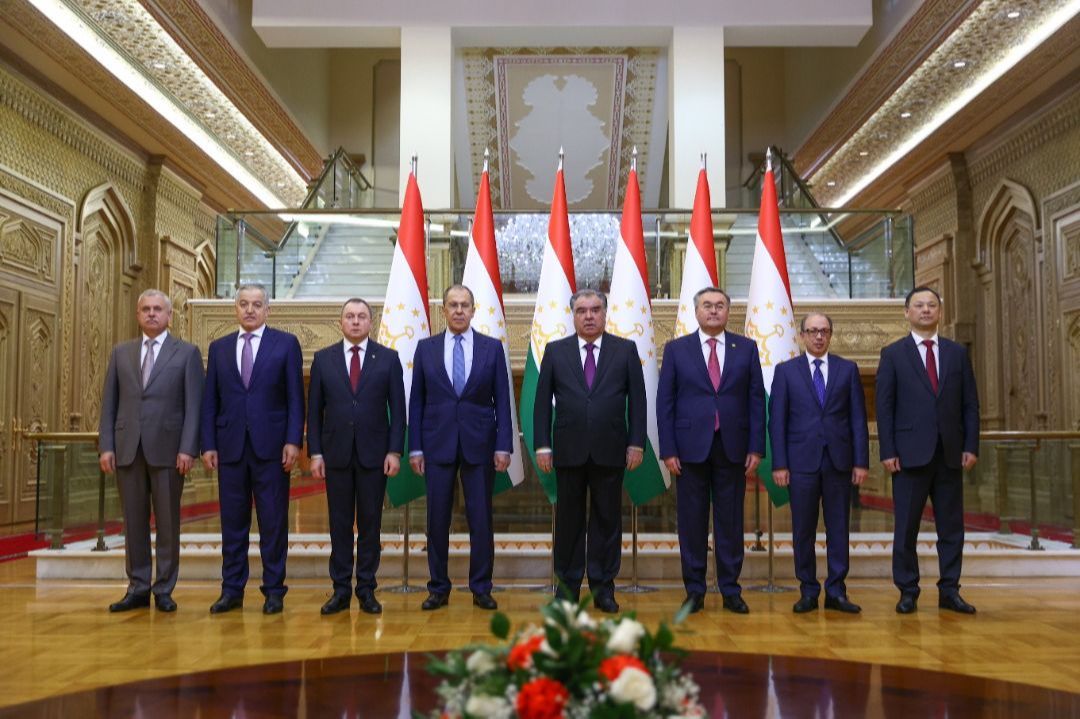 On May 19, 2021, in Dushanbe, Republic of Tajikistan, Minister of Foreign Affairs of the Kyrgyz Republic Ruslan Kazakbaev took part in the meeting of the Council of Ministers of Foreign Affairs of the Collective Security Treaty Organization.
The participants of the meeting thoroughly exchanged views on the state and prospects of the development of the international and regional situation and its impact on the security of the CSTO member states, including the development of the situation after the withdrawal of the American military contingent from Afghanistan.
Also they discussed issues of strengthening CSTO cooperation with the CIS, SCO, as well as other international organizations, development of CSTO Partner and CSTO Observer institutions. Particular attention is paid to the coordination of the activities of the CSTO member states in order to create a reliable system for ensuring biological safety.
In his speech, R.Kazakbaev thanked the parties for their readiness to provide the necessary assistance to the Kyrgyz Republic in overcoming the humanitarian consequences of the border armed conflict that took place on April 28-30, 2021 on the Kyrgyz-Tajik state border.
He noted that the people of Kyrgyzstan, with pain in their heart and deep sorrow, are experiencing tragic events that have occurred between friendly peoples living side by side for many centuries.
The Head of the Foreign Ministry of Kyrgyzstan said that the Kyrgyz Republic has made every possible effort from the first days to resolve the conflict exclusively by peaceful, political and diplomatic means at the negotiating table in order to restore stability and confidence. As a result, a further escalation of the conflict of possible multiple casualties and a possible destabilization of the situation in the Central Asian region was avoided.
The Minister noted that the Head of State made a proposal to create a Peace-Keeping Commission, consisting of elders from both sides living in neighboring or mixed villages to prevent further conflicts, and also signed a Decree of the President of the Kyrgyz Republic "On priority measures for the restoration and development of border villages of the Batken region," according to which the State Commission for the Restoration and Development of Affected Villages of the Batken region was formed.
He had stressed that, in accordance with the Collective Security Treaty, party-states should refrain from the use of force or the threat of force in inter-State relations and should resolve all differences between themselves and other states by peaceful means, noting that in achieving the fundamental goals of the CSTO, priority should be given to political and diplomatic means.
At the initiative of the Kyrgyz side, a draft Joint Statement of the CSTO Foreign Ministers on confidence-building in the border area was submitted during the meeting, which reflects the agreements reached and the intentions of the parties to prevent conflict in the border territories of the CSTO.
Member states Chairman of the Collective Security Council of the CSTO, President of the Republic of Tajikistan Emomali Rahmon received the Foreign Ministers before the CSTO meeting. He noted that the Tajik side attaches priority to the cooperation of the CSTO member states and stressed the need to continue joint efforts to achieve the goals set.
Within the framework of the meeting of the Council of Ministers of Foreign Affairs of the CSTO, 8 documents were signed regarding the further development of the collective security system in the political and military fields, in the field of countering modern challenges and threats.
The Foreign Ministers also adopted joint statements by the Foreign Ministers of the CSTO member States on the 75th anniversary of the Verdict of the International Military Tribunal in Nuremberg, on the strengthening of the Biological and Toxin Weapons Convention, on CSTO cooperation with States and international organizations, and the statement by the CSTO Foreign Ministers on the extension of the Treaty between the Russian Federation and the United States of America on measures for the further reduction and limitation of strategic offensive weapons of 8 April 2010.
Council of Ministers of Foreign Affairs of the CSTO approved the Plan of Consultations on Foreign Policy, Defense and Security for the second half of 2021 - the first half of 2022, which provides consultations on political, military cooperation and in the field of countering challenges and threats.
Also, due to the fact that in 2022 the 30th anniversary of the signing of the Collective Security Treaty and the 20th anniversary of the creation of the CSTO will be celebrated, the Jubilee Action Plan with multiple planned events was approved.
In addition, the Council of Ministers of Foreign Affairs of the CSTO  approved the draft Agreement on Jurisdiction and Legal Assistance in Cases Related to the Temporary Stay of Forces and Means of the Collective Security System in the Territories of CSTO Member States.
The parties agreed to continue further cooperation between the CSTO member states in all areas of mutual interest.
The next meeting of the Council of Ministers of Foreign Affairs is scheduled on the eve of the session of the Collective Security Council in the 4th quarter of 2021 in Tajikistan.