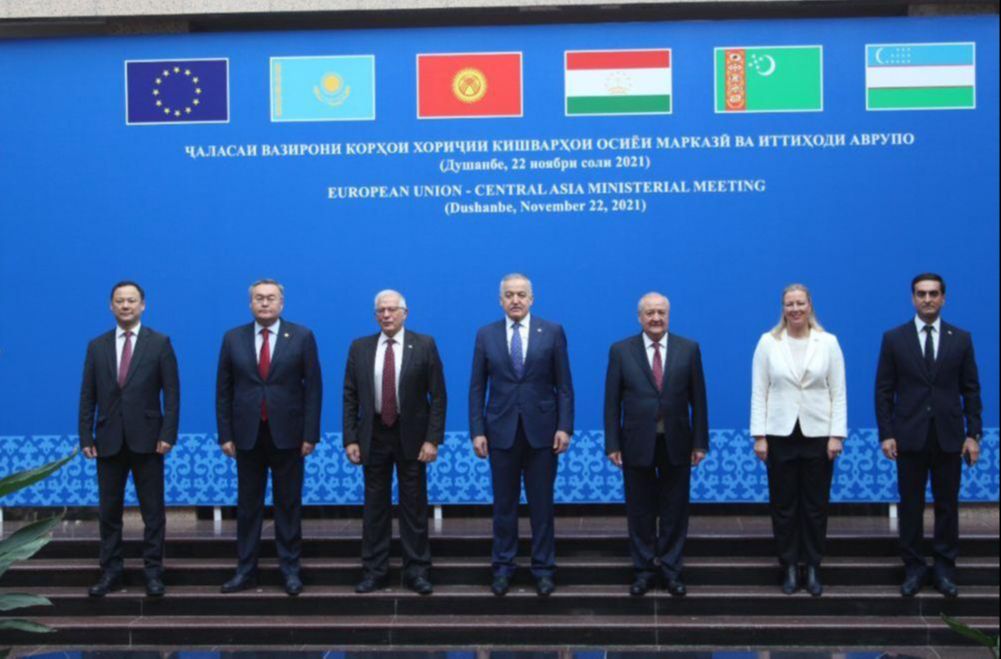 On November 22, 2021, the Minister of Foreign Affairs of the Kyrgyz Republic in Dushanbe Ruslan Kazakbaev took part in the European Union - Central Asia Ministerial Meeting.

The main topics of the meeting were current events in the region, issues of the development of relations between the EU and Central Asia, common security challenges with an emphasis on events in Afghanistan, economic cooperation, trade and investment relations, as well as cooperation in the field of the environment, water and climate.

In his speech, the Minister Kazakbaev thanked Central Asian and European countries for sending international observers to the parliamentary elections on November 28, which will be the final stage of the post-crisis transit period. The Minister noted the importance of interregional cooperation and the readiness of the Central Asian countries to increase interaction. He emphasized the significant potential for the implementation of the China-Kyrgyzstan-Uzbekistan railway construction project. He informed about the preparation of the Kyrgyz side for the Consultative Meeting of the Heads of Central Asian States in Bishkek in 2022. He offered to promote cooperation in the field of education and create a European University in Central Asia, as well as a European secondary school in the Kyrgyz Republic.

The meeting participants expressed a common opinion on the advisability of building a constructive dialogue with the new authorities of Afghanistan, primarily in order to provide the Afghan people with the necessary humanitarian, financial and economic assistance. The parties voiced concern over the threat of radicalization, the growth of international terrorism, an increase in drug trafficking, illegal migration and discussed joint actions to ensure public security and stability in the region. In this context, the countries agreed to intensify cooperation on strengthening borders and countering drug trafficking, including through strengthening the BOMCA and CADAP programs. Minister Kazakbaev informed about the humanitarian assistance provided by Kyrgyzstan to the Afghan people, and expressed readiness to interact and constructively cooperate with the world community and the Government of Afghanistan in this direction. European Commissioner J. Urpilainen informed about the allocation of 1 billion dollars by the EU to avoid humanitarian and socio-economic collapse in Afghanistan.

The CA countries and the EU welcomed the successful holding by the Kyrgyz Republic on November 5, 2021 in Bishkek of the First EU-CA Economic Forum at the level of the heads of government of the CA countries and the Executive Vice President of the European Commission V. Dombrovskis, where priority areas of economic cooperation were discussed: green recovery, digitalization and creating a healthy business environment. The Forum participants noted the timeliness of the Forum, taking into account the need for post-event reconstruction of countries. In order to translate the agreements into a practical plane, the parties agreed to hold the Forum on a permanent basis in the capitals of Central Asia and the EU in sequence. The next Forum will take place in 2023 in Kazakhstan. The Kyrgyz Republic proposed to establish a Forum Secretariat with headquarters in Bishkek.

European Commissioner J. Urpilainen informed about the allocation of funds from the EU for the CA region for the period 2021-2027 within the framework of the EU Regional Indicative Program. Funds will be distributed across the region for the implementation of projects in priority areas of cooperation: sustainable development (human rights, water and energy, civil society, strengthening peace and security) and prosperity (digitalization, business environment, human potential).