News / News and Events / Minister of Foreign Affairs R. Kazakbaev summed up the results of the activities of the diplomatic service bodies with the heads of the foreign missions of the Kyrgyz Republic 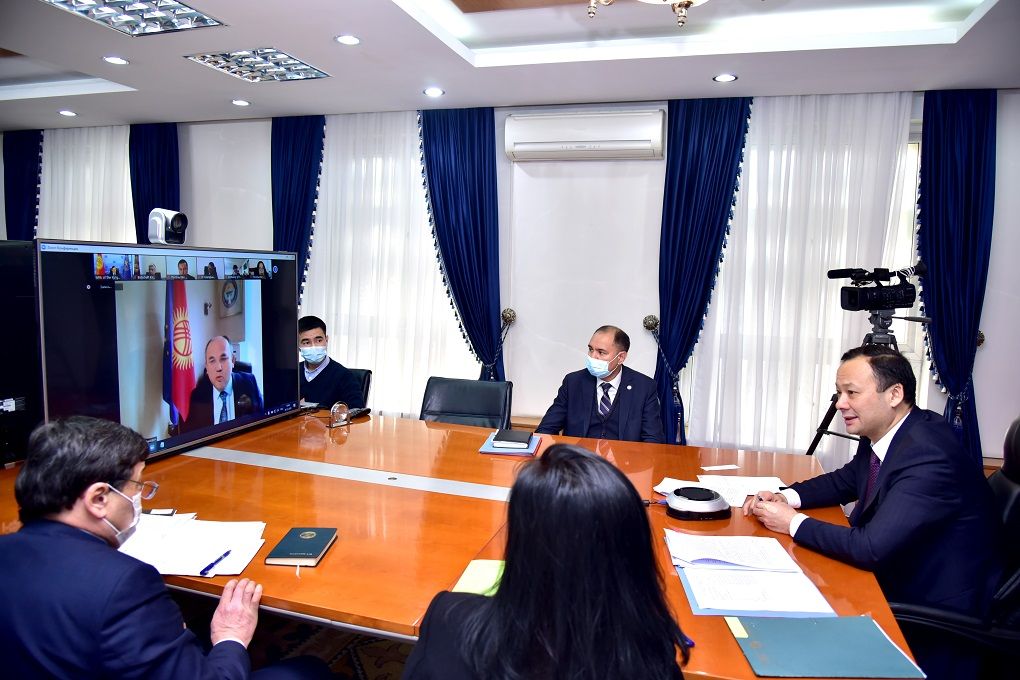 During the meeting, the results of activities for 2020 and the main tasks of the diplomatic service bodies for 2021 were considered.

R. Kazakbaev noted the most important results of the work of the Ministry of Foreign Affairs of the Kyrgyz Republic in 2020, among which he highlighted activities to counter the consequences of COVID-19. He emphasized that the pandemic has radically changed the nature of relationships and communications not only between people, but also between countries of the world.

As the head of the Kyrgyz Foreign Ministry noted, this year will remain in memory as the year in which the diplomats of Kyrgyzstan showed that diplomacy is in demand not only in matters of peace and war, but also in periods of humanitarian crises. “It is you, the heads and employees of our foreign missions, who have found themselves at the forefront of foreign policy efforts to combat the consequences of the pandemic, ensuring continuous contacts with foreign partners, attracting much-needed financial, technical and humanitarian assistance to the country, assisting in the restructuring of external debt,” he said R. Kazakbaev.

In addition, the Minister of Foreign Affairs of the Kyrgyz Republic focused on the most important functional component of the Foreign Ministry's work to protect the interests of the state and its citizens. In particular, he noted the assistance in the return of Kyrgyz citizens from abroad. He informed that this year the forces of the foreign missions of the Kyrgyz Republic, the consular service, territorial divisions, in connection with the pandemic in the conditions of closed borders, evacuated about 55 thousand compatriots from abroad.

Since the beginning of the pandemic, according to preliminary estimates, external humanitarian assistance totaling about US $ 100 million has been attracted just to overcome the shortage of essential medicines in the country and appropriate personal protective equipment. Assistance from foreign partners consisted in the provision of ventilators, oxygen concentrators, test systems, reagents for laboratory tests, PCR tests, PPE and other medical equipment.

The bodies of the diplomatic service, along with other interested state bodies, also provided widespread assistance to the Ministry of Finance of the Kyrgyz Republic on the issue of attracting external assistance not only to prevent and combat the COVID-19 pandemic, but also to support the budget. To date, in general, an agreement has been reached with donors in the amount of $ 774.4 million, of which $ 343.3 million of external financial assistance has been attracted, of which loans amount to $ 271.3 million and grants - USD 72.0 million.

Work continues on maintaining food security, efforts to restructure the external debt and defer payments on it. In recent months, an agreement has been reached on the temporary suspension of servicing the external debt to a number of foreign states.

Taking into account the situation in the country after the parliamentary elections on October 4, 2020, the results of which were declared invalid by the CEC on October 6, R. Kazakbaev noted that the work of the diplomatic service in emergency conditions to overcome the severe consequences of the pandemic was aggravated by the need to assist in resolving the political crisis. In this regard, the Ministry has developed an Anti-Crisis Action Plan, approved by the Acting President of the Kyrgyz Republic, Prime Minister of the Kyrgyz Republic. In the course of its implementation, the Ministry, together with foreign missions of the Kyrgyz Republic, urgently launched full-scale activities in order to carry out explanatory work to inform about the stabilization of the internal political situation and confirm the Kyrgyz Republic's commitment to fulfilling its earlier obligations within the framework of bilateral and multilateral cooperation, attracting investments and financial and technical assistance, as well as the settlement of public debt.

In total for these purposes since October of this year. to date, about 330 meetings / briefings, visits, videoconferencing have been held both in the Kyrgyz Republic and abroad - with official representatives of government agencies of all partner countries and international organizations of which the Kyrgyz Republic is a member. All of them followed the main line of informing about the internal political and economic situation in the Kyrgyz Republic, attracting investments in promising industries, supporting small and medium-sized businesses in our country, and solving the problems of our compatriots abroad.

The Minister of Foreign Affairs of the Kyrgyz Republic further drew attention to the fact that in the coming 2021 our country will go through presidential and parliamentary elections, and the people of Kyrgyzstan should also express their position on the form of government during the upcoming Referendum on January 10, 2021.

In this regard, during the meeting with the heads of the foreign missions of the Kyrgyz Republic, the historic importance of holding open, fair and fair elections, including at polling stations located abroad, was noted. Particular emphasis was placed on the need to ensure sanitary and epidemiological requirements for voting abroad, taking into account the current situation in the host countries.

At the end of the meeting, Minister R. Kazakbaev outlined the importance of continuing the comprehensive efforts of all foreign institutions of the Kyrgyz Republic to protect the rights of citizens, defend the interests of the Kyrgyz Republic abroad, expand regional integration processes, strengthen strategic partnership, develop mutually beneficial relations with allied and friendly countries and international organizations. In addition, he noted the need to ensure food security, continue efforts within the framework of economic diplomacy, attract investments, and assist in the development of regions of the Kyrgyz Republic.

Minister R. Kazakbaev instructed all heads of foreign missions of the Kyrgyz Republic to accelerate the preparation and submission of annual reports. He informed that in the early days of the New Year, a briefing is planned for media representatives, which will additionally highlight the results of the activities of the Ministry of Foreign Affairs of the Kyrgyz Republic for 2020.

Subsequently, the Minsitry of Foreign Affairst of the Kyrgyz Republic intends to report to the public on a monthly basis, with the involvement of representatives of the media, on the work being done.