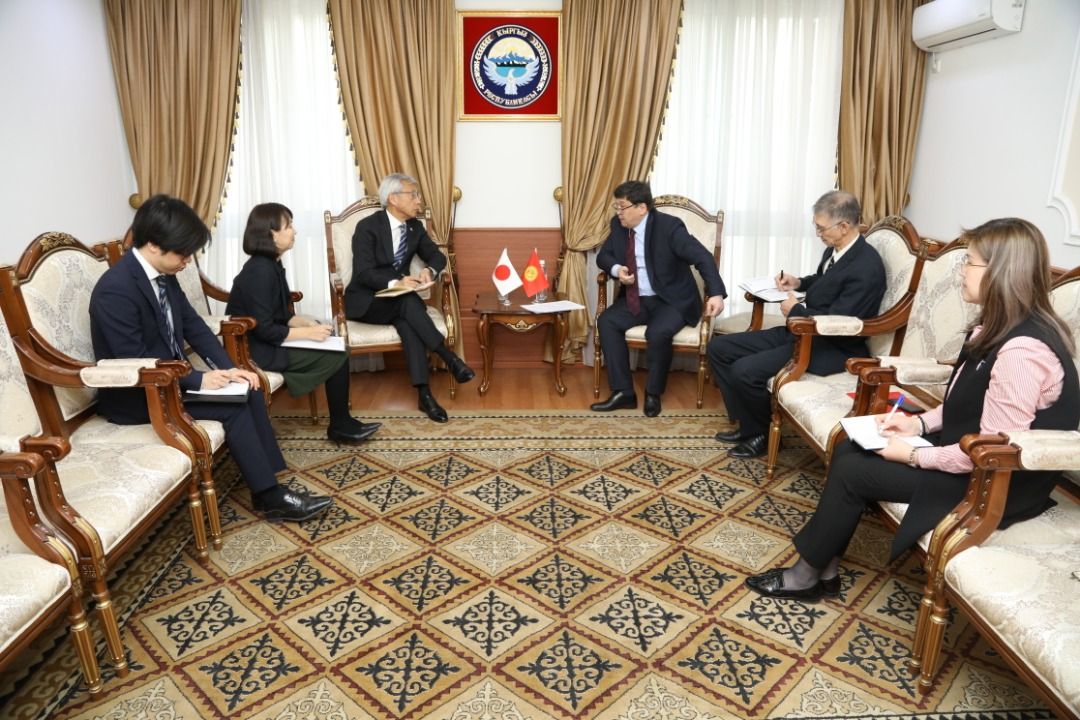 On March 31, 2022, Deputy Minister of Foreign Affairs of the Kyrgyz Republic Azizbek Madmarov met with Ambassador Extraordinary and Plenipotentiary of Japan in Kyrgyzstan Shigeki Maeda, during which an exchange of views on topical issues of bilateral cooperation took place.

Deputy Minister A.Madmarov and the Ambassador of Japan S.Maeda noted with pleasure the results of the ongoing work aimed at developing Kyrgyz-Japanese cooperation in the political, trade, economic, cultural and humanitarian spheres.

As part of the celebration of the 30th anniversary of the establishment of diplomatic relations between Kyrgyzstan and Japan, as well as in order to continue the political dialogue and maintain contacts, the parties stressed the importance of organizing visits at the high level, taking into account the epidemiological situation in the world.

They confirmed their intention to hold joint events of a scientific, cultural and humanitarian nature: planting sakura seedlings, a friendship evening with the participation of a delegation from Japan, as well as a Symposium and a business match, which will be held jointly with the Kyrgyz-Japanese Business Council and the Kyrgyzstan-Japan Friendship Foundation. An agreement has been reached to organize a guest lecture with the participation of the Ambassador of Japan S.Maeda on the basis of the Diplomatic Academy of the Ministry of Foreign Affairs of Kyrgyzstan.

The sides also stressed the importance and significance of cooperation in multilateral formats, in particular, the Ambassador of Japan informed about the Asia-Pacific Water Summit, which will be held in Kumamoto on April 23-24 this year, the agenda of which includes issues of modern challenges related to water issues.

In addition, issues of the agenda and participation of the Kyrgyz side in the upcoming 8th meeting of the Foreign Ministers of the countries participating in the Dialogue "Central Asia - Japan" were discussed in the videoconference format.

The sides confirmed their common desire to further deepen bilateral cooperation on topical issues of the bilateral and multilateral agenda of Kyrgyz-Japanese relations.