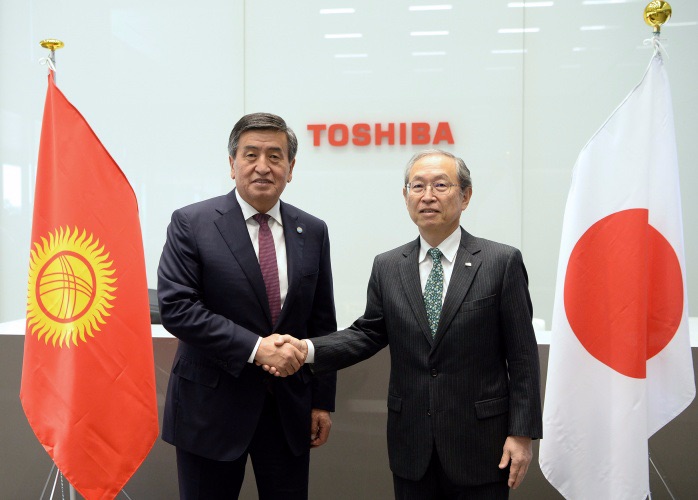 On October 23, 2019, President of the Kyrgyz Republic Sooronbai Zheenbekov visited the head office and plant of Toshiba Energy Systems and Solutions as part of a working trip to Japan.

The Head of State got acquainted with the activities of the plant for the production of hydro turbines and generators and inspected the production process.

In an interview with the company's management, the President noted that in terms of expanding bilateral economic cooperation between Kyrgyzstan and Japan, the implementation of infrastructure and hydropower projects is an urgent area.

He noted with satisfaction the growing interest of large Japanese companies in Kyrgyzstan.

"We are well aware of the activities of Toshiba Corporation. Given the large hydropower potential of the country, we consider the possibility of joint cooperation with the Japanese side in this direction, including with your company", Sooronbai Zheenbekov said.

President of Toshiba Corporation Satoshi Tsunakawa spoke in detail about the history and activities of the company. He noted that he is aware of the rich hydropower resources of Kyrgyzstan, where 80% of energy is produced at hydroelectric power plants.

He expressed interest in developing mutually beneficial cooperation with Kyrgyzstan using advanced Japanese technologies. He spoke about the experience and history of the Corporation. He noted that four areas are considered as priorities in Toshiba's activities, one of which is hydropower.

The Toshiba Energy Systems and Solutions company is a part of the large transnational Toshiba Corporation and specializes in release of power systems.