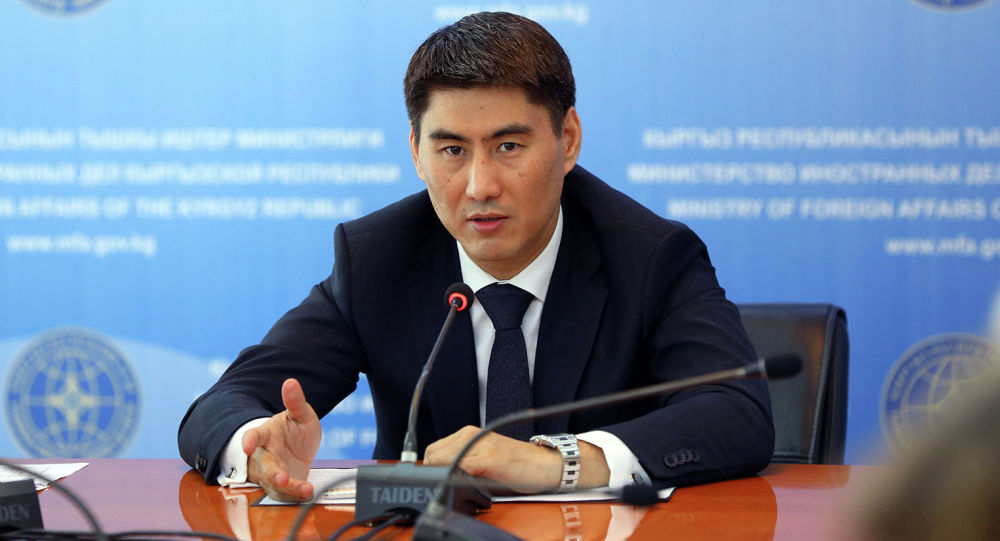 Chingiz Aidarbekov answered these and other questions about what the Ministry of foreign Affairs of Kyrgyzstan is doing during the pandemic, what contribution it made to the fight against COVID-19, what our Republic sees in the international arena and what Kyrgyz people could become famous for.

The foreign Minister could have been asked a lot of interesting things, but the coronacrisis left its mark on this interview — the first part of the conversation is devoted to the role of diplomats in the fight against the epidemic. However, we managed to find out the opinion of Chingiz Aidarbekov on other equally topical issues.

- How are you planning to hold parliamentary elections abroad in the context of a pandemic? Moreover, considering that in the fall we are promised another wave of morbidity ...

- The Ministry is carrying out a set of measures to prepare diplomatic missions and consular offices of the republic for the upcoming elections. The issue of establishing 42 polling stations abroad has been agreed, and it is also planned to approve two polling stations in the newly opened embassies of the Kyrgyz Republic in Italy and France.

In a pandemic, of course, all measures necessary to ensure the safety of both voters and members of election commissions will be observed.

- What has the Foreign Ministry been doing since the beginning of the pandemic? What has been achieved in the fight against COVID-19?

- In this difficult period, the ministry is working on the edge of its capabilities, in an enhanced mode. A small team of employees of the central office and diplomats who are located abroad are continuously working in all areas, a clear and effective interaction with the offices of the president, government and ministries has been developed. A tremendous amount of work has been done, it will not be possible to tell about everything and in detail - this is a large array of information. I will try to describe the situation in general terms.

We are faced with a new challenge - the need to deeply focus on specific issues. A new direction has appeared in the Foreign Ministry - medical diplomacy. Employees of the central office and foreign missions are forced to help in the procurement of medical equipment, medicines, personal protective equipment. The ministry and our embassies are engaged in this around the clock, we held many negotiations with different countries, and all of them were under time pressure: we acted like firefighters in fact. In addition, the country needed socially significant goods, and the issue of food security was acute.

- How much humanitarian aid did you manage to attract?

- We focused on providing the country with PCR tests and express tests, reagents and personal protective equipment. At the same time, negotiations were underway to attract humanitarian and other assistance in accordance with the country's needs.

As for PPE, more than 1.61 million disposable masks, over 333 thousand reusable respiratory masks (with filters), more than 86 thousand special protective masks, about 85 thousand protective overalls, over a million medical gloves, about 8.5 thousand liters were received. disinfectants (in the form of antiseptics, sanitizers and other medical preparations), more than 364 oxygen concentrators, about 220 ventilators, over 3.5 million syringes. We are sincerely grateful to all our friends and partners.

- As far as we know, Russia provided considerable assistance ...

- In accordance with the agreement between Sooronbai Jeenbekov and Vladimir Putin, a delegation from Rospotrebnadzor was in Kyrgyzstan, moreover, our country received 30 thousand PCR tests for diagnosing coronavirus. Just a few days ago, the constituent entities of the Russian Federation - the Chechen Republic and Bashkortostan - decided to lend a helping hand. At the same time, on July 21, a special board of the Russian Ministry of Defense arrived in Bishkek with doctors, medicines and equipment. EMERCOM of Russia also sent a group of specialists with equipment.

It is important to note that the assistance provided by Russia during the fight against COVID-19 is free of charge. This once again underlines our allied relations and strategic partnership.

- In the first year of the Foreign Ministry’s leadership, you made many foreign trips. Can you find out what their results are?

- All meetings, negotiations, visits, forums have a specific purpose for each participating party. Any meetings and agreements at the level of heads of state, government, parliaments, departments are only the visible part of the iceberg covered in the press, and most of the preparatory work, numerous expert meetings remain in the shadows. It is precisely as a result of the painstaking work of the competent authorities of the parties concerned, on the basis of the compromise and consensus reached by them, that visits are subsequently carried out and the final agreements are recorded.

- Do you discuss upcoming trips with the country's leadership?

- Each of my missions is coordinated with the President and Prime Minister, and based on their results, a detailed report on the work done and the results achieved with conclusions and proposals is prepared.

I pay special attention to outreach work among citizens. Perhaps, it was precisely because of the active and full coverage of all my negotiations and business trips that I got the feeling that I make more trips than my predecessors. This is far from the case. By the way, a separate analysis was devoted to this topic and it turned out that in terms of the number of foreign trips I am somewhere in the middle, when compared with colleagues from other CIS countries, not to mention European and other states.

- What are the three most valuable achievements for the country as a result of your activity as head of the Foreign Ministry?

- I want to make a reservation right away. It is my deep conviction that foreign policy, being a logical continuation of the internal one, has clear guidelines, tasks, goals that are worked out and agreed upon in advance. Foreign policy in Kyrgyzstan is determined by the president. In diplomacy, any nuance matters, so it is important to make decisions carefully and thoughtfully.

It is with great pleasure that I note the well-coordinated work between the Ministry of Foreign Affairs and the offices of the president, government, and the Jogorku Kenesh. There is close interaction with all government agencies. This became possible thanks to the professionalism, unity, dedication of my colleagues.

I initially took a course to improve the qualifications, knowledge and experience of diplomats. We have finalized the regulatory framework, introduced clear and transparent procedures for the selection of personnel. A multi-stage, competitive system of open competition for young specialists has been established. There is an increased interest in the MFA system among young people with excellent training and knowledge of foreign languages.

Last year, an important result of our work was the adoption of the Foreign Policy Concept of the Kyrgyz Republic, the preparation of which was carried out very scrupulously.

- How do you see the foreign policy of the Kyrgyz Republic in the context of the collapse of globalization, liberalism and economic crisis around the world?

- I recall one of the works of Haruki Murakami, where it says something like this: "One day the storm will end, and you will not remember how you survived it. You will not even be sure if it really ended. But one thing is certain: when will you leave from the storm, you will no longer become the person who entered it. Because that was its whole point. "

As I noted earlier, we are guided by state interests in foreign policy. Each subject of international relations has its own agenda, tasks and goals. Measuring our potential and capabilities, guided by our goals and objectives, as well as taking into account similar components of the other side, we develop approaches and consistently implement the appropriate steps.

- The reason for the strained relations between Kyrgyzstan and Kazakhstan is often the lobbying of the interests of Kazakhstan's business in the EAEU space. What is the CD strategy in solving this issue? Is it really impossible to agree on the division of the spheres of production and trade?

- First of all, I want to emphasize that our relations with Kazakhstan have been and remain fraternal, friendly and good-neighborly.

As you know, the EAEU is a market with a population of over 183 million people, where the free movement of goods, services, capital and labor must be ensured. It is natural that every country wants to find and occupy its own niche in the integration association. In this vein, fair competition is a completely natural process, and it should serve as the engine of national economies. The Union is developing, getting stronger, while the member states are trying to stimulate their own production.

The EAEU has its own mechanism for eliminating emerging barriers, which Kyrgyzstan actively uses. Just recently, it was decided to form an operational committee (high-level working group) to resolve differences and resolve controversial issues on the movement of goods across the borders of the participating countries.

- The Japanese are known for their politeness and organization, the Germans for their punctuality and pedantry. And what qualities would help Kyrgyzstanis to declare themselves?

- Undoubtedly, our people have an ancient history. As reported in many historical annals, in the notes of travelers from the East and West, the Kyrgyz were distinguished by their belligerence, courage, love of freedom, awareness of their national unity.

In modern and modern times, as well as in the difficult period of the COVID-19 pandemic, the Kyrgyz people have clearly demonstrated such qualities as cohesion, mutual assistance, dedication, and volunteerism. I think they characterize us best.

- What is the image of Kyrgyzstan in the international arena?

- This is a positive image of a country promoting real democracy, the principles of the rule of law, socio-economic, information and technological modernization. Moreover, the preserved national identity of the Kyrgyz is important - our traditions, culture, worldview.

- One experienced local diplomat said that the Kyrgyz are fluent in other languages, as this was facilitated by the nomadic way of life in the past: the nomads had to quickly adapt to different conditions. Do you agree?

- The people of Kyrgyzstan are very talented and original. As for speaking other languages, I can't disagree with an experienced diplomat.