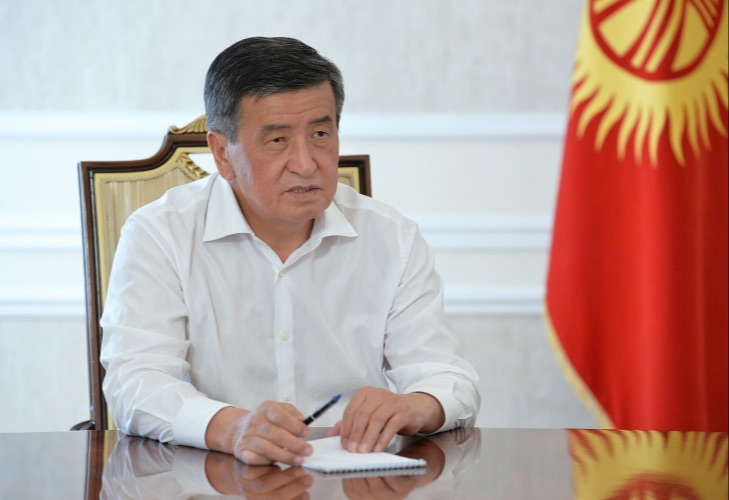 Transcript of the interview of the Head of State:

- Good afternoon, dear radio listeners. On the air of "Birinchi Radio", the program "Frank Conversation with the President". As usual, we intend to ask a number of questions to the Head of State. Good afternoon Sooronbai Sharipovich.

- Dear President, the consequences of Covid-19 have affected all areas of our lives. What efforts are being made to restore trade, economic, humanitarian and cultural ties between Kyrgyzstan and other states?

- You're right. Since our country's economy is open and free, we are dependent on external global conditions.

As you know, international flights were suspended, and road routes are also facing certain difficulties.

This situation also affected the trade and economic relations between the countries. Negatively affected the socio-economic development of our country.

Nevertheless, life is gradually returning to normal. All the work that we did and planned to do before the outbreak of the infection will continue.

The fundamentals of economic development in Kyrgyzstan, in general, will remain unchanged.

What will we focus our attention on?

I have always noted that our organic agricultural products are competitive in the foreign market.

We are working on a long-term basis in this direction. This is a promising business.

Kyrgyzstan will increase the volume of exports of ecologically clean agricultural products.

It is well known that such environmentally friendly products are in great demand in any country. Especially developed countries with a high standard of living are interested in such clean products.

Kyrgyzstan is a member of the World Trade Organization, the Eurasian Economic Union, has a preferential GSP + status.

Neighboring China is also a big market for us. Work has already begun on the export of products to China. Work in this direction will be intensified.

Within the EurAsEC, there are attempts to establish free trade with those countries that are not members of this union.

For example, the Eurasian Economic Union and its member states signed a Free Trade Agreement with Serbia.

A similar agreement is in force with Vietnam and Iran.

Negotiations are underway to conclude free trade agreements with countries such as Israel, Egypt and India.

To enter foreign markets, we need to produce and increase the amount of food that meets the requirements.

For this, it is necessary to improve the production technology and provide a sufficient amount of raw materials.

We will resolve these issues through cluster projects. Sources of financing have already been identified, incentives and incentive instruments have been provided.

To enter the foreign market, we have projects for the construction of logistics centers, funds have already been found.

As I noted earlier, our entrepreneurs are the engine of our economy.

We will support them with internal resources. Active work is underway in this direction.

Creating a supportive business environment is a key requirement of our national strategic development.

The issue of creating an Export-Import Development Bank is being considered. The government is working on this issue. This will also affect business support.

The Ministry of Foreign Affairs has been instructed to develop economic diplomacy, which has a significant impact on exports. The corresponding work is underway. I think there will be results.

The widespread use of digital technologies also has a significant impact on economic relations. Therefore, we also attach great importance to the process of digitalization of the country.

Electronic commerce has become an integral part of today's life.

According to experts, it will continue to grow rapidly.

Therefore, we need to work on the development of electronic commerce. Form a legislative base, resolve other issues.

With regard to humanitarian and cultural relations, we can say that in this difficult period, mutual support and mutual assistance with our partners has increased.

I can say with confidence that humanitarian relations between the countries have strengthened in such a difficult time for mankind.

We have felt tremendous support from all our partners - distant and near countries, our neighbors, international organizations.

On behalf of the people of Kyrgyzstan, I would like to thank all our partners for their support.

Doctors from Russia worked side by side with our doctors.

From the first day of the fight against infection, the Russian Federation, personally Vladimir Vladimirovich Putin, has provided us with great support.

Recently, the President of Russia announced the registration of the world's first vaccine against coronavirus.

This marks a turning point in the fight against the virus for all of humanity.

On behalf of the people of Kyrgyzstan and on my own behalf, I congratulate the Russian Federation, our strategic partner and ally, on this momentous event.

We hope that the vaccine will be effective and the whole world will get rid of this scourge.

- You recently signed the Law on Amendments to Certain Legislative Acts on the Legal Status of Compatriots with Foreign Citizenship. Expanding the rights of our migrants abroad will allow them to get advantages in business and entrepreneurship. In general, how will the state policy of supporting compatriots be implemented in the future?

- I can say that we have strong interaction with our compatriots abroad.

The Government, the Ministry of Foreign Affairs, our embassies abroad are consistently working in this direction.

You know that the Council for Relations with Compatriots Abroad operates under the President of the Kyrgyz Republic.

This bill was considered at the first meeting of the Council in August 2019.

Our compatriots presented their proposals, they were taken into account when developing the bill. Adopted by parliament, I signed it recently, the law came into force.

The law introduces the concept of “the status of a compatriot with foreign citizenship”.

According to the law, our compatriots who have received the citizenship of another country due to various circumstances can, in their homeland, in Kyrgyzstan, have all the rights inherent in Kyrgyzstanis, including the right to own property, to education, treatment, etc.

As mentioned above, the Council for Relations with Compatriots Abroad was supposed to meet on an annual basis. But in view of the current situation, this year the next meeting has not yet been organized. We are still considering options in what format it will be possible to conduct it.

This Council is the main platform for communication with our compatriots who make a great contribution to the development of their homeland.

They not only raise problematic issues, but also come up with progressive ideas.

I not only on this platform discuss topical issues with compatriots. I also meet and communicate with them in other formats. They were looking forward to the adoption of this law, and it happened. We are interested in working closely with them. And before that, we have always paid special attention to this direction, and henceforth it will be in the center of our attention.

- Let's return to the issue of an internal nature for our country. From time to time we learn from the press that this or that journalist, blogger or civil activist was summoned to law enforcement agencies for questioning for criticizing the President. And this becomes the subject of discussion in civil society. I would like to know your opinion on this issue. After all, these actions cannot but cast a shadow on your policy.

- I have long thought to express my opinion on this issue. Thanks for the question.

I have said several times before, and now I would like to repeat that a strong civil society and freedom of speech will contribute to the development of any country. Of course, freedom also implies great responsibility. This, of course, is already a separate topic.

The police are doing their duty.

A journalist or activist writes their materials, makes criticism. And they also do their job.

We have a big political campaign ahead of us. There will be parliamentary elections.

And there will be those who want to declare themselves, to attract public attention.

This is all a natural process. Any politician, including me, should be ready for such things.

It is quite normal when discussions and disputes, criticism take place without infringement of someone's rights, within the framework of political or human culture.

As I noted above, the police are minding their own business. But I, as President, do not need this - to be protected in this way.

- Sooronbai Sharipovich, thank you for taking the time to answer our questions.