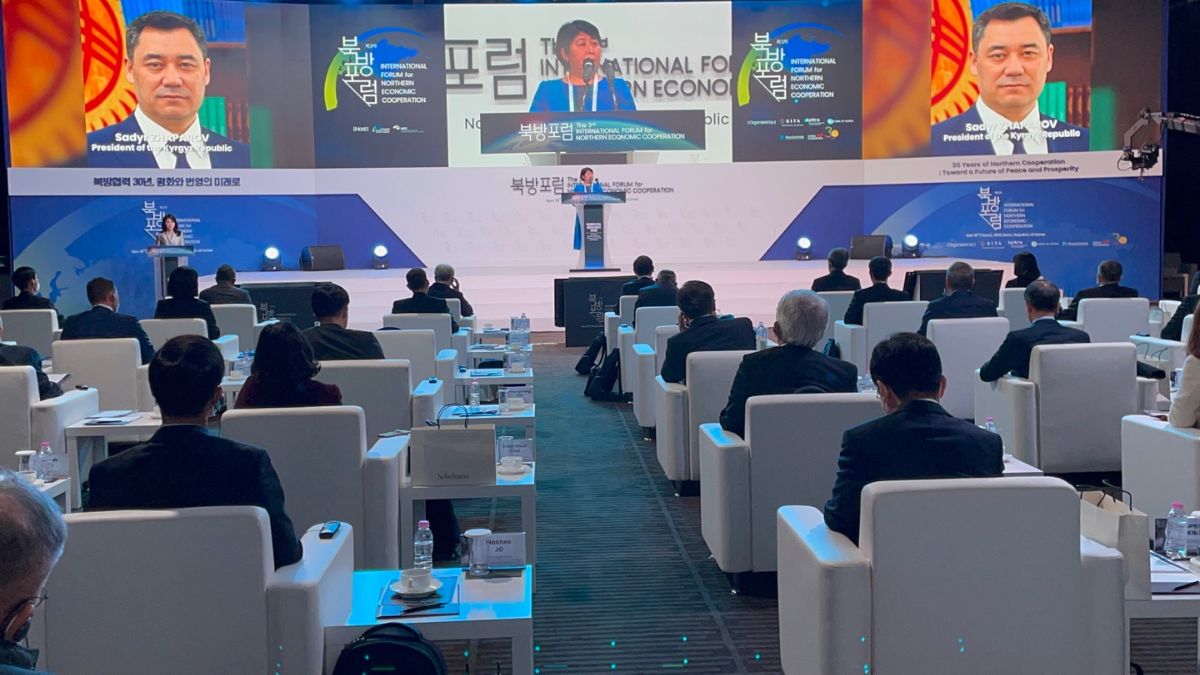 On November 18, 2021, Seoul hosted the 3rd International Forum of Northern Economic Cooperation, organized by the Presidential Committee on Northern Economic Cooperation of the Republic of Korea, with the participation of heads of government bodies, large organizations, banks and companies of South Korea, former US President Bill Clinton, representatives of the Russian Federation, Mongolia, Uzbekistan, Kyrgyzstan, Turkmenistan and other states, including ambassadors of the partner countries of the "New Northern Policy".

During the opening ceremony, the Ambassador of Kyrgyzstan to the Republic of Korea Dinara Kemelova read out a message of the President of the Kyrgyz Republic Sadyr Zhaparov to the Forum participants.

The President of the Kyrgyz Republic Sadyr Zhaparov in his message, touching upon the favorable investment climate of Kyrgyzstan, invited Korean companies and banks to invest in sectors such as the textile industry, green economy and energy, digitalization, the creation of joint investment funds, agriculture and processing, the creation of smart cities and smart farms as well as tourism. Also, the President noted the great potential of hydropower and mineral resources in Kyrgyzstan.

In Kyrgyzstan, a number of National Programs are being implemented, which are aimed at improving the well-being of the Kyrgyz Republic people, for the development of a green economy, as well as adapted to the changes in Kyrgyzstan, in the region and the world. In the message of the President of Kyrgyzstan, priority sectors of the economy are noted in accordance with the adopted National Development Program until 2026, which are similar to the main directions of the “9 bridges of the New Northern Policy”, namely the development of green energy, transport and logistics infrastructure, agriculture, industry, investment cooperation, health care, information technology and tourism.

The President of Kyrgyzstan proposed the countries of the region to promote liberalization and facilitation of trade, encourage investment and the development of transport logistics, jointly introduce innovative technologies in industry and a green economy.

Further, within the framework of the Forum, Ambassador of the Kyrgyz Republic Dinara Kemelova took part in a panel business session and presented the investment potential of Kyrgyzstan and favorable business opportunities in the country.