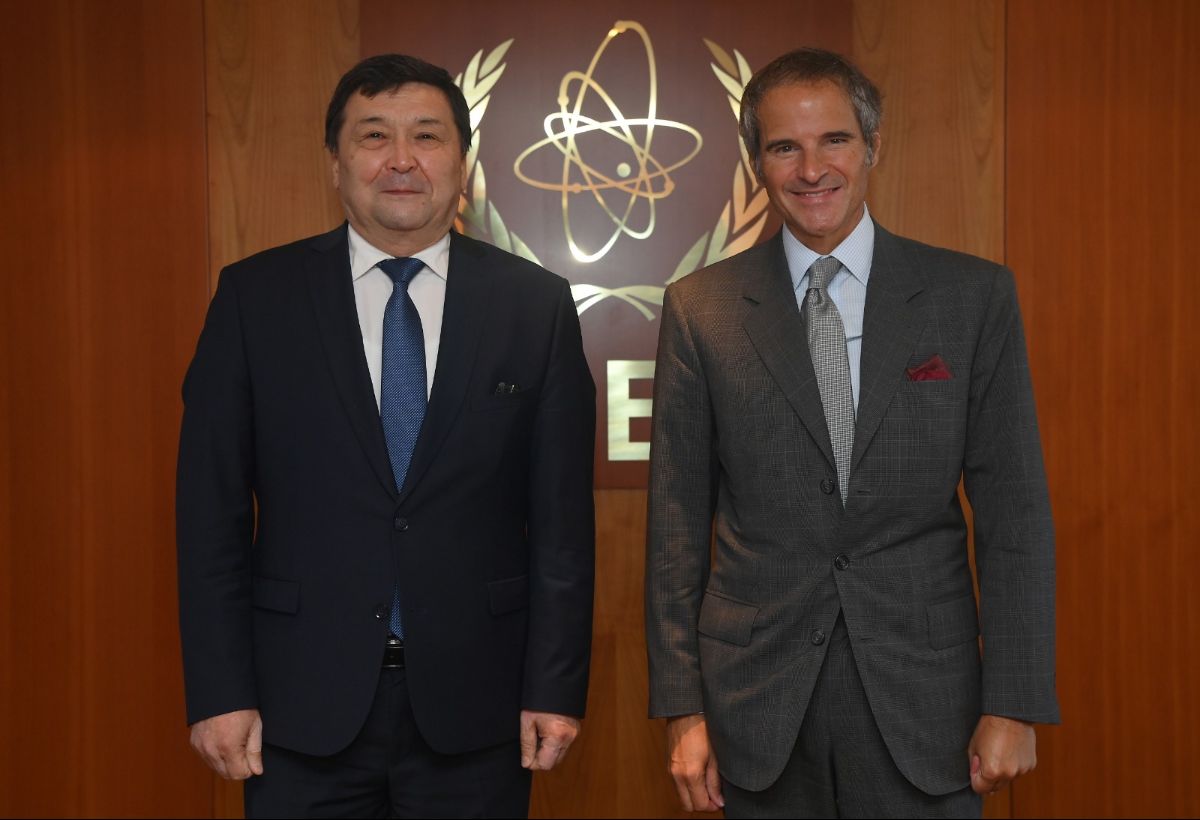 On 6-9 September this year in Vienna, on the margins of the 5th World Conference of Speakers of Parliaments (5WCSP) as part of the delegation of the Parliament of the Kyrgyz Republic, headed by the Chairman of the Parliament H.E.Talant Mamytov, the Deputy Foreign Minister of the Kyrgyz Republic Azizbek Madmarov met with the Heads of the following International Organizations based in Vienna, Austria: OSCE, UNIDO, IAEA and UNODC.

During the meeting with the OSCE Secretary General, Ms. Helga Maria Schmid, A. Madmarov informed the interlocutor that on 28 November 2021 parliamentary elections will be held in the Kyrgyz Republic. He noted the importance of holding elections in line with recognized democratic principles and OSCE commitments. The Kyrgyz side intends to invite international observers, including the OSCE ODIHR mission observes. Expressed the willingness of the Kyrgyz side to create all conditions for the full and safe work of observers.

He noted the uniqueness of the OSCE Academy in Bishkek, stressed that the Academy has the right to further strengthen and expand.

In her turn, the OSCE Secretary General H.Schmid emphasized the importance of the election process and the work of the observer missions. She noted that she is a great supporter of the OSCE Academy in Bishkek. She monitors the financial condition of the Academy and does her best to obtain maximum support in ensuring its sustainable funding.

At meeting with UNIDO Director General LI Yong, A. Madmarov noted that Kyrgyzstan attaches great importance to cooperation with UNIDO and is interested in further using the potential and resources of the Organization for the development of industry. Expressed gratitude for assistance in the development and adoption in the Kyrgyz Republic of the Strategy for Sustainable Development of Industry of the Kyrgyz Republic for 2019-2023. At the same time, he emphasized that for the successful implementation of the Strategy, Kyrgyzstan was included in the list of countries in which the Programme for Country Partnership (PCP) can be implemented.

In his turn, L.Yong stressed that the PCP is an important element in which the priorities of the Kyrgyz Republic are reflected and expressed hope for the approval of this program by the Kyrgyz side as soon as possible.

During the meeting with IAEA Director General Rafael Mariano Grossi, Deputy Minister A.Madmarov informed that during the period of its membership in the IAEA, a number of important projects, both national and regional have been implemented in Kyrgyzstan, aimed at improving radiation safety and radioecological monitoring, modernizing medicine and improving radiotherapy services, and strengthening the capacity of government agencies. He expressed gratitude to the Agency for the assistance in the transfer of 3 PCR diagnostic equipment during 2020-2021.

He noted the success of the implementation of the Strategic Master Plan for the rehabilitation of uranium tailings in the Kyrgyz Republic (Min-Kush, Mailuu-Suu, Shekaftar). Currently, the parties are developing an updated draft Strategic Master Plan, which will be signed on the margins of the 65th-anniversary session of the IAEA General Conference in September 2021.

In turn, R.M. Grossi noted the efforts of the Agency to strengthen the capacity of state bodies of the Kyrgyz Republic. He drew attention to the importance and necessity of solving problems related to the uranium legacy and expressed hope for continued cooperation.

At a meeting with the Director of the Department of Operations in the rank of Deputy Executive Director of the United Nations Office on Drugs and Crime (UNODC), Ms. Miwa Kato, A. Madmarov noted that Kyrgyzstan is committed to actively participating in the development of UNODC to strengthen international security. Emphasized the active participation of the KR in the work of the decision-making bodies of the Organization: the Commission on Narcotic Drugs and the Commission on Crime Prevention and Criminal Justice. He expressed an opinion on the need to unite the efforts of the entire world community in the fight against terrorism and extremism. In this context, he noted the importance of the earliest possible agreement and approval of the UNODC Program for Central Asia for 2022–2026.

In her turn, Ms. M. Kato noted that the new regional Program will provide an opportunity to take a fresh look at the cooperation of the UNODC with the Central Asian countries, including Kyrgyzstan.