А – А А +
Обычная версия
Скрыть
Main / Press-service / Новости / Within the framework of participation in the ceremony of presenting his credentials to King Harald V of Norway, the Ambassador of the Kyrgyzstan to Norway Erlan Abdyldaev held a number of bilateral meetings 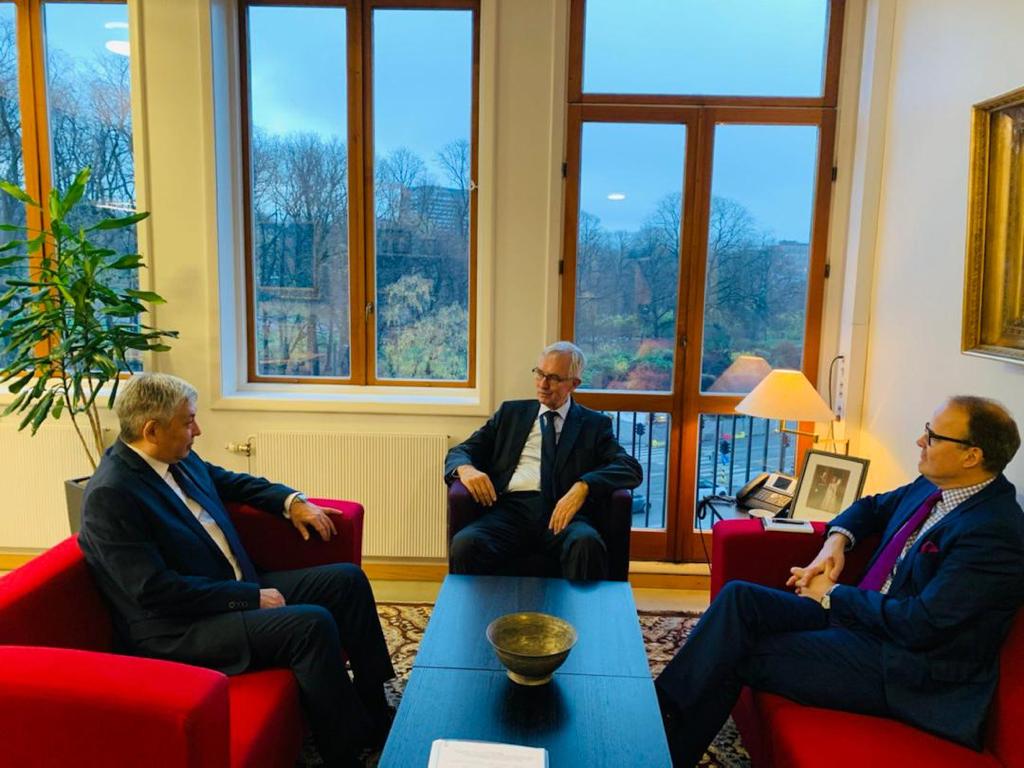 During the above meetings, the interlocutors were informed about the current political situation in the Kyrgyz Republic, the main directions of political and economic reforms, and also discussed in detail the issues of bilateral and multilateral cooperation between the Kyrgyz Republic and the Kingdom of Norway and the prospects for interaction in the fields of energy and renewable energy sources.

The interlocutors noted the need to make joint efforts to increase the volume of mutual trade between the countries and attract investments in various sectors of the economy of the Kyrgyz Republic, interaction in the fight against the further spread of coronavirus infection, and also agreed to organize joint events to celebrate in 2022 the 30th anniversary of the establishment of diplomatic relations between the Kyrgyz Republic and the Kingdom of Norway.

The parties also discussed the resumption of cooperation with the Norwegian Agency for Development Cooperation (NORAD) to further strengthen and develop bilateral Kyrgyz-Norwegian relations.

Within the framework of this visit, the Ambassador Mr. Erlan Abdyldaev met with the Director of the Department of Economic Statistics and International Affairs of the Central Statistical Bureau of Norway Mr. Lasse Sandberg. During the meeting, Ambassador Mr. Erlan Abdyldaev expressed gratitude for 15 years of fruitful cooperation with the National Statistical Committee of the Kyrgyz Republic, during which 4 phases of cooperation were implemented, and also exchanged views on the continuation of further cooperation between the statistical bodies of the two countries.

Also, meetings were held with the Dean of the Norwegian diplomatic corps, Ambassador of the Republic of the Union of Myanmar Ms. Daw Maw Maw, and the President of the Honorary Consuls Club of Norway Jon Erling Tenvik, during which the issues of interaction of the Embassy of the Kyrgyz Republic in Norway with the residence in Berlin with the diplomatic corps were discussed, as well as the parties, exchanged views on the appointment of the Honorary Consul of the Kyrgyz Republic in Norway.

The Ambassador Mr. Erlan Abdyldaev also met with compatriots living in Norway. During the meeting took place a discussion of various issues, including consular issues. The Ambassador called on the Kyrgyz people to show an active civil position and take part in the elections of deputies of the Jogorku Kenesh of the Kyrgyz Republic, scheduled for November 28, 2021.