Main / Press-service / Новости / Minister of Foreign Affairs of the Kyrgyz Republic R. Kazakbaev met with members of the observer mission from the Parliamentary Assembly of the CSTO 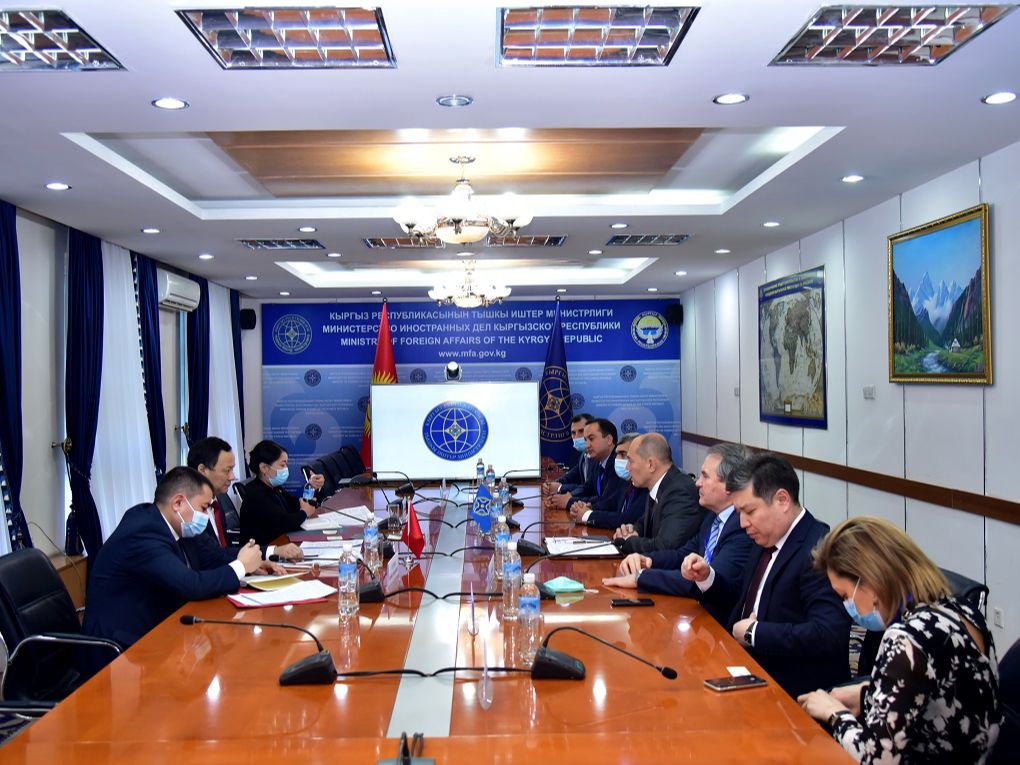 On January 8 2021 Minister of Foreign Affairs of the Kyrgyz Republic R. Kazakbaev met with members of the observer mission from the Parliamentary Assembly of the CSTO who arrived in Bishkek to monitor the preparation and holding of early elections of the President of the Kyrgyz Republic and a referendum on determining the form of government in the Kyrgyz Republic.
Ruslan Kazakbayev expressed gratitude to international observers for their interest and participation in the key event of the Kyrgyz Republic.  He noted that, for its part, the Ministry of Foreign Affairs of the Kyrgyz Republic is ready to provide all possible assistance to foreign guests within its competence.
The head of the foreign ministry of Kyrgyzstan expressed confidence in a comprehensive and objective assessment of international observers following the election and referendum.
The minister said that the country's leadership is making every effort to hold clean democratic elections, in particular, without falsifying the results, stressing that the events of 2005, 2010 and 2020 became evidence that Kyrgyzstan is a democratic state that values the free will of the people.  He noted that the people of Kyrgyzstan is the only source of power, which decides which way the country should go and who will lead it.
R. Kazakbayev noted that the Kyrgyz Republic is one of the countries that successfully implements the model of the electoral process using innovative technologies.  The republic is improving the electoral voting system and the transparency of vote counting.
He emphasized that the Kyrgyz Republic has always adhered to and will continue to adhere to the principles of democratic elections and ensure the free expression of the will of citizens.
R. Kazakbayev expressed hope that the upcoming elections will make a significant contribution to strengthening the international image of Kyrgyzstan as a democratic country, noting that the country's leadership is firmly focused on establishing legal stability and national harmony.
In turn, the Mission Coordinator from the CSTO Parliamentary Assembly - Chairman of the Majlisi namoyandagon Majlisi Oli Committee of the Republic of Tajikistan on Law Enforcement, Defense and Security Rustam Shokhmurod noted that international observers are planning to meet with presidential candidates of the Kyrgyz Republic, visit polling stations at various stages of the voting.
Also international observers from the CSTO PA noted the importance of optimizing elections in the CSTO member states, including by opening additional polling stations.
The members of the mission stressed that according to the results of the upcoming events, the monitoring group will provide the public with objective information.
Concerning the issue of interaction of Kyrgyzstan within the framework of the CSTO, the Head of the Foreign Ministry noted that Kyrgyzstan actively participates in the work of the CSTO, noting that the principles of combating modern challenges and threats to security require convergence and harmonization of the national legislations of our countries.  In this vein, heplaced great hopes on the effective work of the CSTO Parliamentary Assembly.
R. Kazakbayev said that Kyrgyzstan attaches great importance to strengthening interaction within the framework of the CSTO Parliamentary Assembly, noting that it is parliamentarians who are directly invested with the confidence of the people who can most effectively correlate the ideas of strengthening security promoted by the CSTO with current development trends.
He emphasized that peace and unity are more important than ever for the Kyrgyz Republic.
In conclusion, R. Kazakbayev thanked the members of the observer mission of the CSTO Parliamentary Assembly for supporting the democratic processes taking place in Kyrgyzstan during a difficult transit period and wished them success.