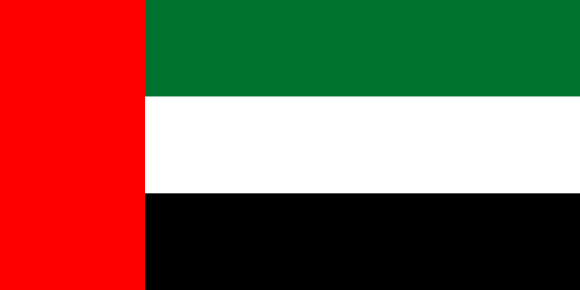 The United Arab Emirates (UAE) is a federative state located on the eastern Arabian Peninsula on the coast of the Persian Gulf and the Gulf of Oman. In the north, south and west, the UAE borders Saudi Arabia, and in the east, Oman. The UAE has a maritime border with Iran, with which it is engaged in a territorial dispute over three Gulf islands – Greater and Lesser Tunbs and Abu Musa.

Area: 83,600 square kilometers, including 200 small islands. Most of it is a flat sand desert.

Climate: The UAE has a subtropical climate with a hot and humid summer and a warm winter. Precipitation is infrequent, averaging 65 mm per year.

Capital: Abu Dhabi (over 1.5 million people); Dubai is the most important trade and economic centre (over 2 million people). Other big cities are Sharjah and Al Ain (Emirate of Abu Dhabi).

Population: About 8,500,000, including no more than 1,000,000 indigenous Emiratis. The share of indigenous residents steadily declines as a result of the continuing active recruitment of a foreign workforce.

There are some 4,700,000 South Asians, including Indians (about 2.6 million), Pakistanis (1.5 millioin), Bangladeshis and the Nepalese residing in the UAE. Over 1.3 million hail from other Asian states, including Iranians (about 500,000), Afghans, Filipinos, Thais, and Malayans. The Chinese (over 200,000) and Vietnamese diasporas are growing rather quickly. Standing out among Arabs are Egyptians (about 250,000), Lebanese (100,000), Syrians, Jordanians, Iraqis, and Yemenis. All told, the share of indigenous Emiratis and other Arabs in the UAE population is about 30 percent.

There are also about 25,000 ethnic Russians, while the number of Russian speakers totals over 40,000.

Official language: Arabic. English is widespread, as are Hindi and Urdu in certain areas.

Religion: Sunni Islam. Nearly 20 percent of the population, including indigenous residents, are Shiites, and 10 percent are Hindus and Christians (foreigners). The government pursues a highly tolerant policy towards other faiths. The UAE has over two dozen Christian churches, including Protestant, Roman Catholic, Coptic, Greek, and others. A Russian Orthodox parish of the Moscow Patriarchy has functioned in Sharjah since 2011.

National holiday: December 2, UAE National Day (the UAE was established on that day in 1971).

Background: The territory of what is today the United Arab Emirates was the traditional domain of nomadic tribes hailing from the central Arabian Peninsula. In the early 19th century, the region known as the “Pirate Coast” (due to numerous pirate attacks on merchant ships) became a target of British expansion, with Britain seeking to secure safe access to India and energize its trade with Iran.

In 1820, the British signed an “eternal peace” treaty with the sheikhs of the most influential local tribes. As a result of this and subsequent agreements (1853 and 1892), the territory was renamed Trucial Oman and in effect turned into a British protectorate.

In 1913, shortly before the start of World War I, Britain and Turkey signed a convention, whereby the former got the exclusive right to Trucial Oman. In 1922, under a special agreement, Britain came to control the issue of oil exploration and production concessions. In 1937, British petroleum companies obtained concessions in Dubai and Sharjah; in 1938, in Ras al-Khaimah; and in 1939, in Abu Dhabi and Ajman.

During World War II, the Trucial Oman emirates maintained their neutrality. At the same time, this period was marked by the growth of anti-colonial sentiments. There were cases of demonstrative disobedience to the British administration in Abu Dhabi and Ras al-Khaimah and armed clashes in Sharjah.

After the war, the British took steps to integrate the emirates. In 1965, British authorities invited the rulers of seven emirates to a meeting in Dubai, at which it was decided to form the Economic Development Council.  In 1968, faced with a surge of anti-British sentiment, the British government announced the withdrawal of its troops from the Persian Gulf area until 1971 and the transfer of power to the local rulers.

On December 2, 1971, the establishment of the United Arab Emirates was proclaimed in Dubai. In early 1972, the seventh emirate, Ras al-Khaimah, joined the federation.

Political system: The UAE is a federation. Under the Constitution, the supreme body of power in the federation is the Federal Supreme Council composed of the emirate rulers who elect the President for five years. The President, in turn, appoints the Prime Minister. By tradition, the President is the ruler of Abu Dhabi and the Prime Minister, the ruler of Dubai. The federal centre (Abu Dhabi) is in charge of internal security as well as foreign, defence, financial and customs policies; it also implements national special socioeconomic development programmes.

Each of the seven emirates is an absolute monarchy, enjoys considerable independence and exercises sovereignty over its lands and territorial waters. Each emirate has a government (executive council) that focuses on economy, education, culture, healthcare, housing and utilities, and pensions.

The provisional constitution, which was approved on December 2, 1971, along with the proclamation of the UAE, was endorsed by the UAE Federal Supreme Council as permanent on May 20, 1996.

After the death in November 2004 of Abu Dhabi’s Sheikh Zayed bin Sultan Al Nahyan, the founder and first President of the UAE, his son, Khalifa bin Zayed Al Nahyan, was elected President.

The ruler of the Emirate of Dubai, Sheikh Mohammed bin Rashid Al Maktoum, has combined the offices of Vice President and Prime Minister since January 2006 (succeeding his elder brother Maktoum, who died in January 2006).

Appointed by the head of state, the Prime Minister forms the government (Council of Ministers) and submits the list of nominees to the President for approval. Regular structural and personnel changes in the Cabinet were made in February 2016. There are 29 government portfolios, with women holding eight of these posts. An executive authority, the government is also the main contributor to the legislative process, drafting bills that after consultations with the Federal National Council (FNC) are sent to the President for approval.

The FNC is a deliberative body of parliamentary type deprived of the legislative initiative; its comments on federal draft laws serve as recommendations. Under the Constitution, the FNC was established in 1972 and has 40 members (20 appointed and 20 elected), with eight and eight contributed by Abu Dhabi and Dubai, six and six by Sharjah and Ras al-Khaimah, and four by each of the other emirates. The deputies are mostly representatives of influential tribes, the business community, and professionals. They are elected for a term of four years.

The latest elections to the FNC were held on October 3, 2015. The appointment of another 20 deputies by the emirate rulers was completed on November 16, 2015. In the same month, Abu Dhabi hosted the first meeting of the newly formed FNC. On November 18, 2015, Amal Al Qubaisi, former FNC Vice-Speaker and former chairwoman of Abu Dhabi Education Council, was elected FNC President.

Judiciary authority in the UAE is represented by the Federal Supreme Court (FSC), courts of the first instance and second instance, as well as courts in individual emirates. The FSC consists of five judges appointed by the UAE Supreme Council. There is also a network of Sharia courts used mostly for registering acts of civil status and judging matters pertaining to family law.

Domestic politics: The situation inside the federation remains stable. Faced with increased tensions elsewhere in the region and the growing influence of radical Islam, the government takes preventive measures against extremist moods. Emerging terror cells are identified and nipped in the bud.

The government is doing much to strengthen the federal centre and federal principles, including by subsidising the less developed northern emirates.

Socioeconomic status: The oil sector is the basis of the national economy (nearly 30 percent of the GDP). The Emirates are sixth in the world in terms of prospected oil reserves (97.8 billion barrels) and fifth in terms of natural gas reserves (6.1 trillion cubic metres). Abu Dhabi accounts for most of the country’s hydrocarbon reserves (95 percent). The average annual rate of oil production is 2.9 million barrels per day.

The UAE is second in the region after Saudi Arabia in terms of industrial production. The country has over 700 companies engaged in the oil-and-gas, chemical, iron-and-steel, ship repair, cement, consumer good, food and other industries.

The agricultural sector employs 5 percent of the population and its GDP share is approaching 6 percent. Local production meets between 25 and 40 percent of national demand for meat and milk products and up to 90 percent for fish. About 80 percent of all required food is imported.

Diversified free economic zones (about 40, mostly located in Dubai) help to maintain a high level of economic activity. Companies from all over the world are attracted by easy tax terms, a well-developed infrastructure, 100-percent foreign ownership of companies and free repatriation of money. Up to 80 percent of non-oil exports go through free economic zones.

The UAE is among the world’s biggest net exporters of capital. Assets of UAE national prosperity funds (Abu Dhabi Investment Authority, Mubadala Investment Company, International Petroleum Investment Company, and others) amount to billions of US dollars. These funds are also a reliable safety cushion for the national economy and finance.

Despite the persisting aftermath of the world financial crisis, the UAE macroeconomic indices are in the green. In 2016, its GDP grew by 3 percent in real terms (minus inflation) to $374.2 billion.

The UAE is at the same level with advanced countries in terms of life expectancy (74 years for men, 78.3 years for women) and infant mortality (13.15 per thousand births). The literacy level is approaching 95 percent.

Foreign trade: The UAE pursues a liberal foreign trade policy. The only existing ban is on trading with Israel. There is a single 5 percent customs duty on all commodities.

Its re-exports, half of which consists of machines and equipment, are twice as expensive as its own exports.

The UAE’s main non-oil trade partners are India, Switzerland, and Saudi Arabia. Its non-oil imports come from India, China, the United States, Germany, and Japan. It re-exports to India, Iran and Iraq.

The Emirates seek to form a favourable external environment and create conditions for stable socioeconomic development at home. The UAE is focused on strengthening stability and security in the Gulf and the Middle East as a whole and on effective countermeasures against the growing terrorist threat.

Abu Dhabi’s foreign policy is flexible and pragmatic and it seeks to achieve a higher profile in regional and international affairs. The UAE was the first Arab and Gulf country to open the headquarters of the Emirati mission to NATO in Brussels, obtained observer status in the African Union, and joined an informal association of states advocating the full elimination of nuclear weapons. Owing to the purposeful efforts by the Emirati authorities, the headquarters of the International Renewable Energy Agency (IRENA) is located in Abu Dhabi.

The UAE has advanced relations with a number of leading Western states, primarily the United States. On a majority of regional and global issues, the Emirates are allied with their GCC partners, above all Saudi Arabia.

The Emirates consistently advocate the resumption of the peace process in the Middle East, the main landmarks for their approaches to Middle East settlement being the relevant UN Security Council resolutions and the Arab Peace Initiative.