А – А А +
Обычная версия
Скрыть
Main / Press-service / Новости / The Ambassador of the Kyrgyzstan in Austria, Tolendy Makeev made a working trip to Klagenfurt, where he met with the Governor of the Federal State of Carinthia Peter Kaiser and President of the Landtag Reinhart Rohr 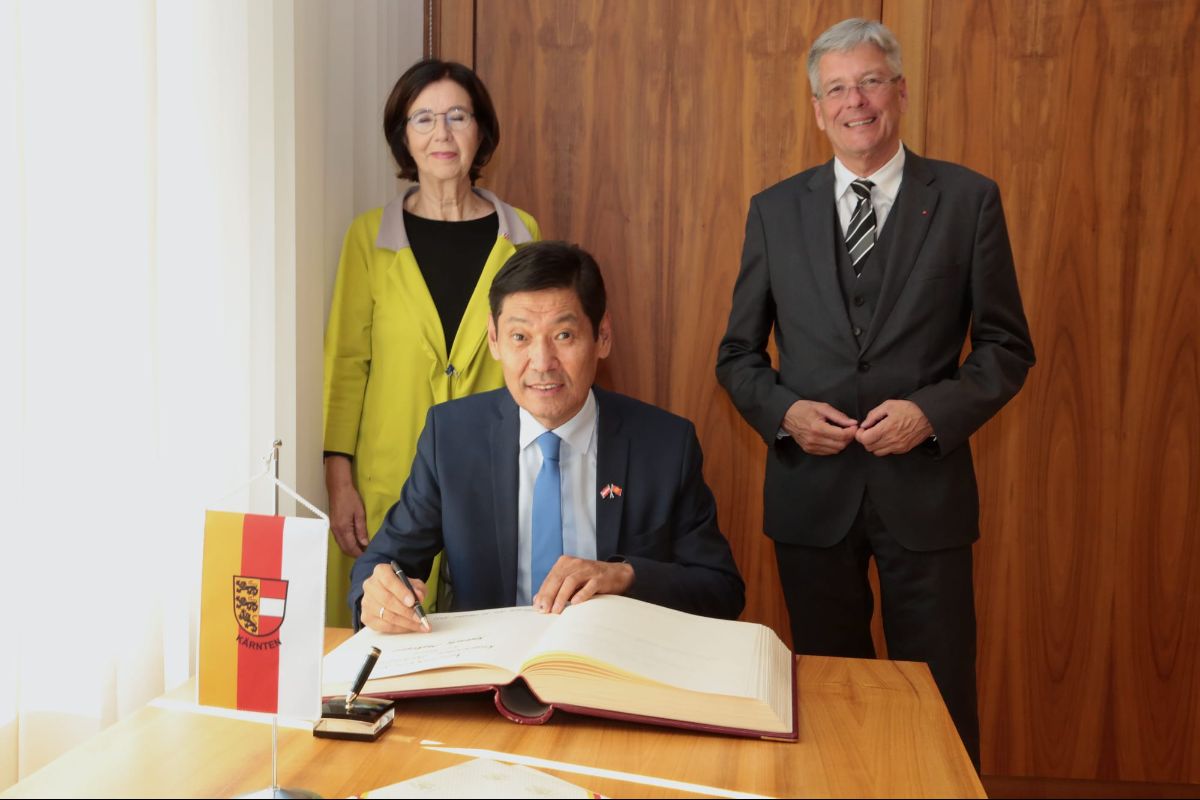 On October 20, 2021, H.E. Ambassador of the Kyrgyz Republic in Austria, Tolendy Makeev made a working trip to Klagenfurt, where he met with the Governor of the Federal State of Carinthia Peter Kaiser and President of the Landtag (Land Parliament) Reinhart Rohr.

During these meetings, the Ambassador of Kyrgyzstan informed the Heads of the Executive and Legislative authorities of Carinthia about the Kyrgyz-Austrian relations, about the activities in the year of the celebration of the 30th anniversary of the State Independence of the Kyrgyz Republic and the forthcoming parliamentary elections in November 28 of this year, which play an important role in the context of further deepening democratic processes and ensuring sustainable socio-economic development of the country.

At the same time, it was noted that held in late September and early October of this year visit of the Minister of Foreign Affairs of the Kyrgyz Republic Ruslan Kazakbaev to Austria, as well as the return visit of the new Minister of Foreign Affairs of Austria Michael Linhart to the Kyrgyz Republic accompanied by a business delegation to participate in the work of the First Economic Forum "EU - CA" in Bishkek and hold official bilateral negotiations are designed to give a new impetus to further deepen the political dialogue, trade, economic and investment cooperation between Kyrgyzstan and Austria.

The Governor of Carinthia, for his part, gave a brief description of the Federal State headed by him and the main priorities in the activities of the land government of Carinthia, expressed his readiness to establish practical cooperation in specific areas of mutual interest.

In this regard, the Ambassador of the Kyrgyz Republic to Austria noted the interest of the Kyrgyz side in studying the experience of developing regions and local governments in Austria. To this end, the most effective tool could be the establishment of twinning relations between specific regions of the two countries. Taking into account the similarity of the natural landscape, it was proposed to consider the possibility of establishing twinning relations between the Issyk-Kul region and the federal state of Carinthia, between Cholpon-Ata and Klagenfurt or Villach. All this could create favorable prerequisites for intensifying mutual contacts at various levels for the subsequent implementation of joint projects in the field of tourism, agriculture through the processing of vegetables and fruits, digitalization using advanced Austrian technologies, and cultural exchange.

The Governor of Carinthia showed himself as a great admirer of the work of the writer Chingiz Aitmatov and expressed his readiness, if possible, to visit the Kyrgyz Republic and the Issyk-Kul region with a visit at the head of the official delegation of Carinthia.

After the meeting, the Ambassador of Kyrgyzstan made an entry in the Book of Honored guests.

President of the Landtag of Carinthia Reinhart Rohr spoke about the history of parliamentarism in Austria, the activities of the current state parliament, and also conducted a tour of the historic halls of the Landhaus, built in the Venetian Baroque style in the second half of the 16th century.

The working trip ended with the Ambassador's participation in the official event on the occasion of the appointment of Christine Muttonen as Honorary Consul of the Kyrgyz Republic in the Federal State of Carinthia, with his residence in Klagenfurt, where he delivered a welcoming speech.

For reference: Christine Muttonen is a well-known Austrian politician, for many years she was a member of the National Council (lower house of parliament) from the Social Democratic Party of Austria, former Chairman of the OSCE Parliamentary Assembly.