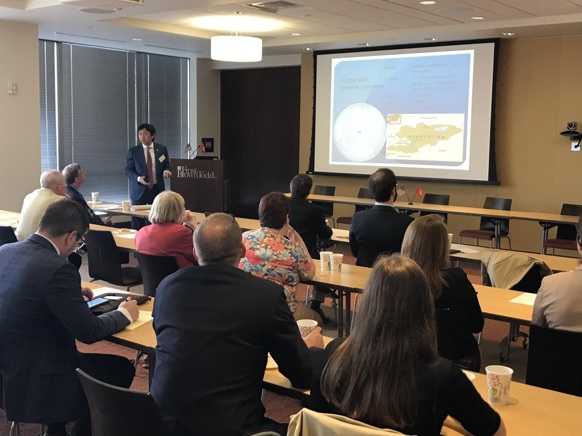 June 22, 2018 in Cincinnati, Ohio, the Ambassador of the Kyrgyz Republic to the United States and Canada Kadyr Toktogulov joined the round table “Invest in Kyrgyzstan.”

The meeting was organized by the Embassy of the Kyrgyz Republic to the US and Canada and the US-Kyrgyz Business Council with the assistance of the US Department of Commerce, the Export Council of the Southern District of Ohio, the World Affairs Council, and the Foreign Policy Leadership Council.

Participants in the round table included representatives of business and non-governmental agencies from Cincinnati, Ohio and Northern Kentucky.

Kadyr Toktogulov, Ambassador of the Kyrgyz Republic to the United States and Canada, presented to the US business community information about the Kyrgyz Republic. He spoke in particular about the investment climate, economic opportunities and export potential of Kyrgyzstan, taking into account the country’s memberships in the WTO and the Eurasian Economic Union. He also noted the comparative advantages of Kyrgyzstan’s geographic location with access to the markets of neighboring countries. In addition, Ambassador Toktogulov fielded questions from participants of the meeting regarding the Government’s commitment to liberalizing legislation in protecting and promoting investments and business, regarding trade and economic cooperation between Kyrgyzstan and the United States, and regarding the foreign policy pursued by the leadership of the Kyrgyz Republic.

In addition, members of the round table were also presented with information regarding the World Nomad Games III which will be held in September this year in Kyrgyzstan. Many participants of the meeting expressed their interest in the upcoming World Nomad Games.