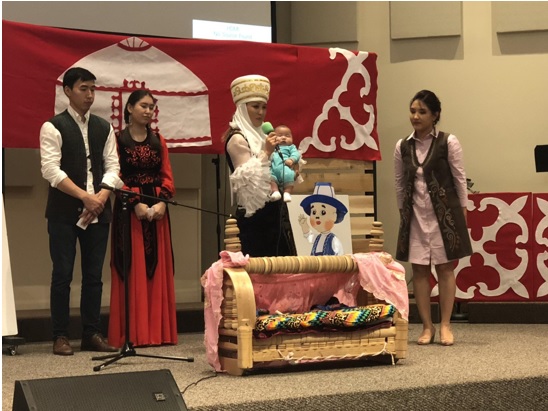 “Kyrgyz Heritage Weekend” took place on June 23-24, 2018 in Cincinnati, Ohio. Adoptive families from across the United States joined this event, bringing their children adopted from Kyrgyzstan to engage with Kyrgyz culture, traditions and customs.

On June 23, the Kyrgyz community in Ohio organized a concert of Kyrgyz music. At the opening of this event, the Ambassador of Kyrgyzstan to the United States and Canada, Kadyr Toktogulov, expressed his gratitude to the local Kyrgyz community for hosting the event in Mason, Ohio. He also underlined the importance of ensuring that children from Kyrgyzstan and their American parents not lose touch with the culture and traditions of the Kyrgyz people. Ambassador Toktogulov thanked the American families for their love and care for the children they adopted from Kyrgyzstan.

Throughout the two-day event, American families and their Kyrgyz children together with their compatriots living in Ohio, organized classes where everybody could learn about the culture and traditions of the Kyrgyz people, the state symbols of Kyrgyz Republic, and national songs and dances.

At the end of the program, participants joined a picnic on June 24, 2018, where adopted children played Kyrgyz national games together with the Kyrgyz community, and tasted various national dishes.