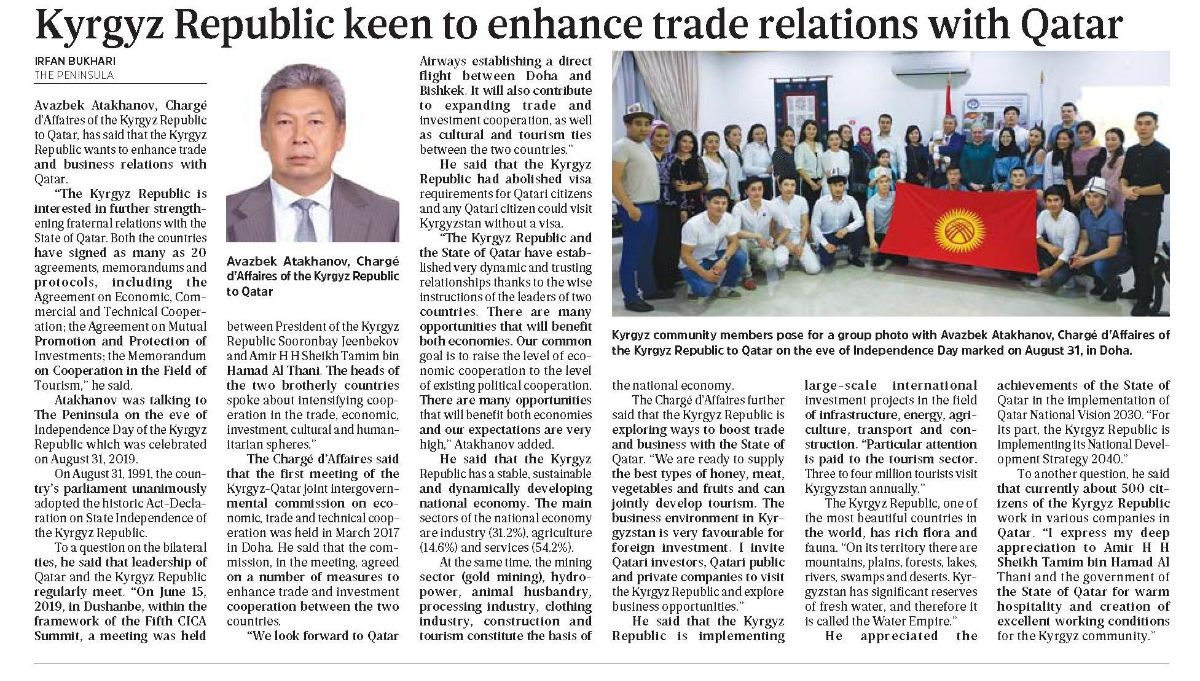 “The Kyrgyz Republic is interested in further strengthening fraternal relations with the State of Qatar. Both the countries have signed as many as 20 agreements, memorandums and protocols, including the Agreement on Economic, Commercial and Technical Cooperation; the Agreement on Mutual Promotion and Protection of Investments; the Memorandum on Cooperation in the Field of Tourism,” he said.

Atakhanov was talking to The Peninsula on the eve of Independence Day of the Kyrgyz Republic which was celebrated on August 31, 2019.

On August 31, 1991, the country’s parliament unanimously adopted the historic Act-Declaration on State Independence of the Kyrgyz Republic.

To a question on the bilateral ties, he said that leadership of Qatar and the Kyrgyz Republic regularly meet. “On June 15, 2019, in Dushanbe, within the framework of the Fifth CICA Summit, a meeting was held between President of the Kyrgyz Republic Sooronbay Jeenbekov and Amir H H Sheikh Tamim bin Hamad Al Thani. The heads of the two brotherly countries spoke about intensifying cooperation in the trade, economic, investment, cultural and humanitarian spheres.”

The Chargé d’Affaires said that the first meeting of the Kyrgyz-Qatar joint intergovernmental commission on economic, trade and technical cooperation was held on March 2017 in Doha. He said that the commission, in the meeting, agreed on a number of measures to enhance trade and investment cooperation between the two countries.

“We look forward to Qatar Airways establishing a direct flight between Doha and Bishkek. It will also contribute to expanding trade and investment cooperation, as well as cultural and tourism ties between the two countries.”

He said that the Kyrgyz Republic had abolished visa requirements for Qatari citizens and any Qatari citizen could visit Kyrgyzstan without a visa.

The Chargé d’Affaires further said that the Kyrgyz Republic is exploring ways to boost trade and business with the State of Qatar. “We are ready to supply the best types of honey, meat, vegetables and fruits and can jointly develop tourism. The business environment in Kyrgyzstan is very favorable for foreign investment. I invite Qatari investors, Qatari public and private companies to visit the Kyrgyz Republic and explore business opportunities.”

He said that the Kyrgyz Republic is implementing large-scale international investment projects in the field of infrastructure, energy, agriculture, transport and construction. “Particular attention is paid to the tourism sector. Three to four million tourists visit Kyrgyzstan annually.”

The Kyrgyz Republic, one of the most beautiful countries in the world, has rich flora and fauna. “On its territory, there are mountains, plains, forests, lakes, rivers, swamps and deserts. Kyrgyzstan has significant reserves of freshwater, and therefore it is called the Water Empire.”
He appreciated the achievements of the State of Qatar in the implementation of Qatar National Vision 2030. “For its part, the Kyrgyz Republic is implementing its National Development Strategy 2040.”
To another question, he said that currently, about 500 citizens of the Kyrgyz Republic work in various companies in Qatar. “I express my deep appreciation to Amir H.H. Sheikh Tamim bin Hamad Al Thani and the government of the State of Qatar for warm hospitality and creation of excellent working conditions for the Kyrgyz community.”

Link to the original material: